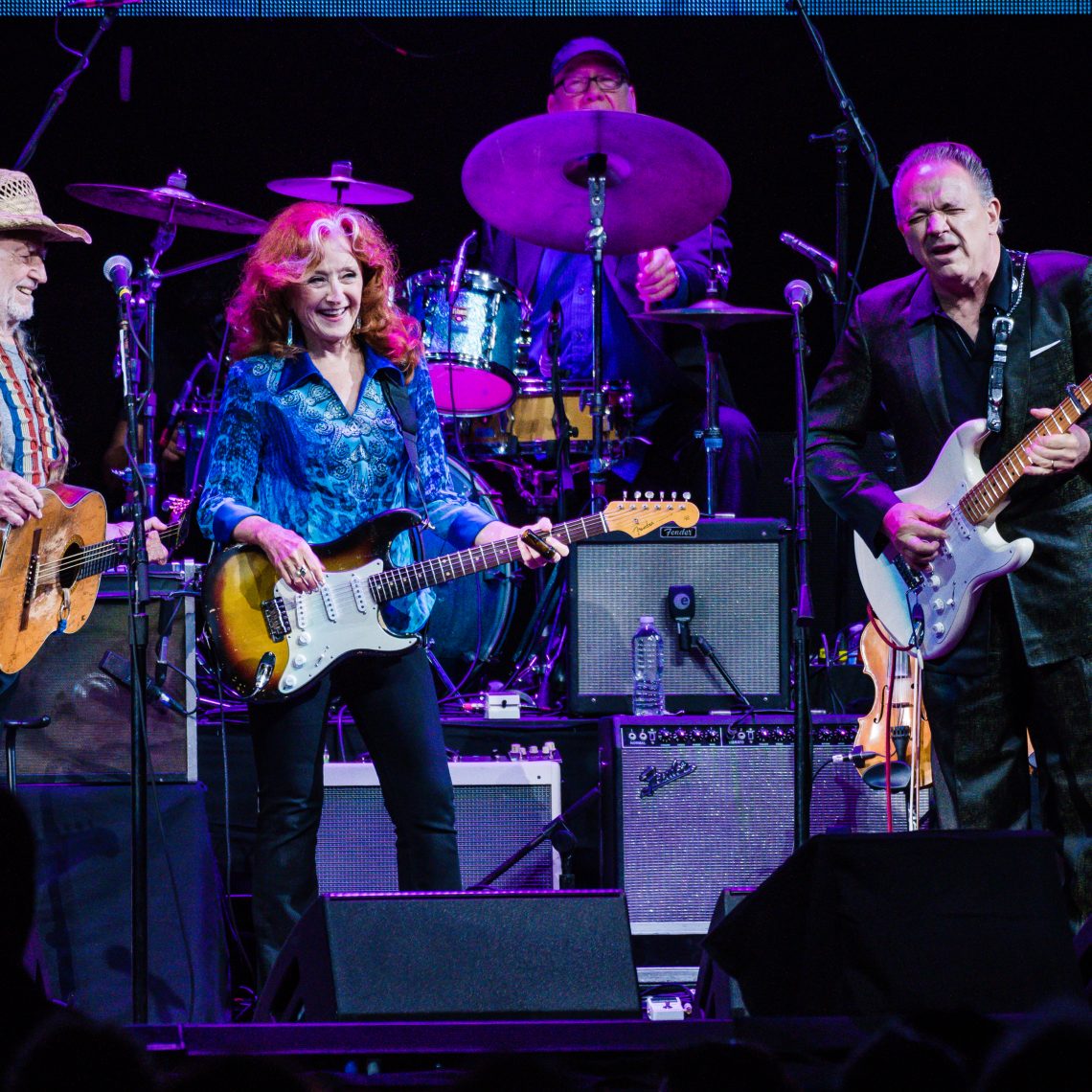 “What would Willie do?” 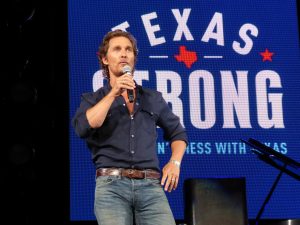 That was the question actor Matthew McConaughey asked the crowd at Austin’s Frank Erwin Center near the tail-end of Friday night’s all-star “Harvey Can’t Mess with Texas” concert for hurricane relief. Seeing as how it was in large part thanks to the grace of Willie Nelson himself that the whole event came together in the first place, the answer was obvious: Give Back.

And that’s exactly what Willie and a host of other musical legends, anchored by band leader Charlie Sexton and the Asleep at the Wheel players, did throughout the four-hour-plus marathon benefit, which had been announced just nine days earlier and sold-out in less than 24 hours. Proceeds from both ticket sales and a coinciding online fund drive went to the Rebuild Texas Fund, which has now raised nearly $70 million towards its $100 million goal for helping Texas communities impacted by Hurricane Harvey in late August. 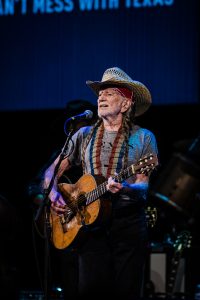 What would Willie do? (Photo by Charles Reagan Hackleman/Courtesy C3)

Although the event was broadcast commercial free via YouTube and on TENGA-owned TV stations across the Texas, viewers at home actually only got an hour-long taste of the full concert. The broadcast portion of the evening came first, giving fans in attendance at the Erwin Center a sampler of what was to come. McConaughey, one of the evening’s many guest hosts, started the night with his signature “Alright, alright, alright!” exclamation, right before Willie took the stage with “Whiskey River.” Bonnie Raitt and Jimmie Vaughan chased that with with a dueling guitar version of “Flooding In Texas,” followed by Fort Worth soul singer Leon Bridges and Asleep at the Wheel frontman Ray Benson, duetting on “Funny How Time Slips Away.”

Along with Renee Zellweger, Austin mayor Steve Adler introduced a video clip of Jimmy Buffett who, while in Paris, was sending his support in the form of a $50,000 donation. Another Texas-born actor, Luke Wilson, later introduced TV reporter Brandi Smith from Houston’s KHOU, along with footage of her coverage from the thick of the story featuring the rescue of a truck driver. But there was still plenty more live music to fit into the broadcast, including the Lake Charles, Louisiana bilingual act Ha*Ash (performing “No Te Quiero Nada”), and James Taylor, who took the stage with “Walking on a Country Road” before bringing Raitt back out for “You Can Close Your Eyes.” Texas’ own Lyle Lovett was next, performing “Simple Song” before Houston police chief Art Acevdeo took the stage for a moving tribute to 60 year old Sgt. Steve Perez, the officer who lost his life in the flood waters in the line of duty. Wrapping up the filmed telethon portion of the evening, Paul Simon sang “America,” then invited out his wife, Edie Brickell, and a trio of fiddlers (including Martie Maguire of the Dixie Chicks) for a spirited “Waltz Across Texas.” And for the big finale, Willie returned with the entire cast for a spirited — if admittedly somewhat shaky and clearly under-rehearsed — run through his beloved hit, “On the Road Again.” 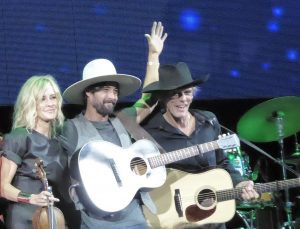 If that first hour wasn’t star-studded and highlight filled enough, the rest of the show — performed just for the fans in the arena — jammed even more special collaborations and one-offs. Lovett sang a duet of “Blues for Texas” with Benson, and then dedicated “(That’s Right) You’re Not From Texas” to all of the people who “turned out to be fine Texans.” Bridges returned for “River,” “New Orleans,” and “Coming Home,” Ha*Ash offered up a cover of Jewel’s “Foolish Games,” and Bingham was joined by Maguire and Jai Malano for the Stephen Foster classic “Hard Times Come Again No More,” as well as “The Weary Kind” and “Hallelujah.” Bingham would later make another appearance during Nathaniel Rateliff & the Night Sweats’ set, busting out some dance moves during their hit “S.O.B.” (if you ever wanted to see Bingham do the worm, this was your dream come true.) Rateliff also invited Raitt out for a swampy “Delta Lady.” 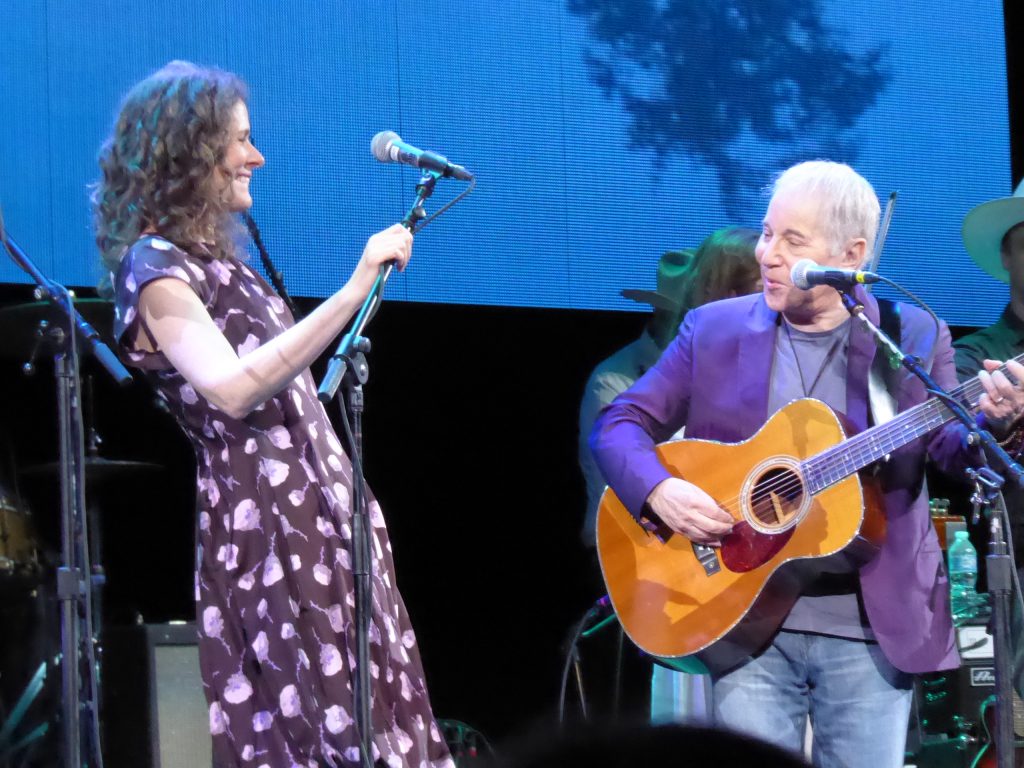 Edie Brickell — introduced by UT football legend Vince Young and reunited with her old Dallas band the New Bohemians — skipped “What I Am” (perhaps just as well, given that “throw me in the shallow water” line) but did reach back to 1988’s Shooting Rubberbands at the Stars for the album’s other MTV-era college radio hit, “Circle.” Raitt then sizzled with Vaughn on their duet of “Pleasure’s All Mine” and then invited Ruthie Foster up for “Angel from Montgomery” and Taylor — with whom she shared a summer of baseball stadium co-bills — for “Thing Called Love.” Taylor began his own three-song set with solo performances of “Sweet Baby James” and “Up on the Roof,” then called Raitt, Foster, and Maiano back out to join him for “Wasn’t That a Mighty Storm.” After the aforementioned Rateliff & the Night Sweats, the un-billed Little Joe y La Familia surprised with “Lonely Nights,” and the greatest hits parade parade kept rolling when Simon opened his set with “The Boxer” and “Me and Julio” (featuring Brickell on a fine whistle solo.) The husband and wife duo then pulled the old Conway Twitty/Loretta Lynn howler, “You’re the Reason our Kids are Ugly.”

Naturally, though, the honor of closing out the whole night could only belong to Willie, a man who has anchored countless benefits and fundraisers throughout his career. He was in strong voice and clearly good spirits, kicking his set off with a delightfully tongue-in-cheek twofer of “Still Not Dead” and “Roll Me Up and Smoke Me When I Die” before a trio of classics: “Still is Still Moving to Me,” “Mamas Don’t Let Your Babies Grow Up to be Cowboys,” and “Good Hearted Woman,” which he dedicated to Waylon Jennings. He paid lovingly playful respects to Merle Haggard, too, via “It’s All Going to Pot,” before once again calling everyone else back out  for another all-hands-onstage grand finale — an uplifting medley of “I’ll Fly Away” and “Will the Circle Be Unbroken.” In marked contrast to the rather awkward pile up in “On the Road Again” that closed the TV broadcast, this time around the host of all stars collectively stuck the landing, making it the perfect, feel-good ending for a very long — and very memorable — night. 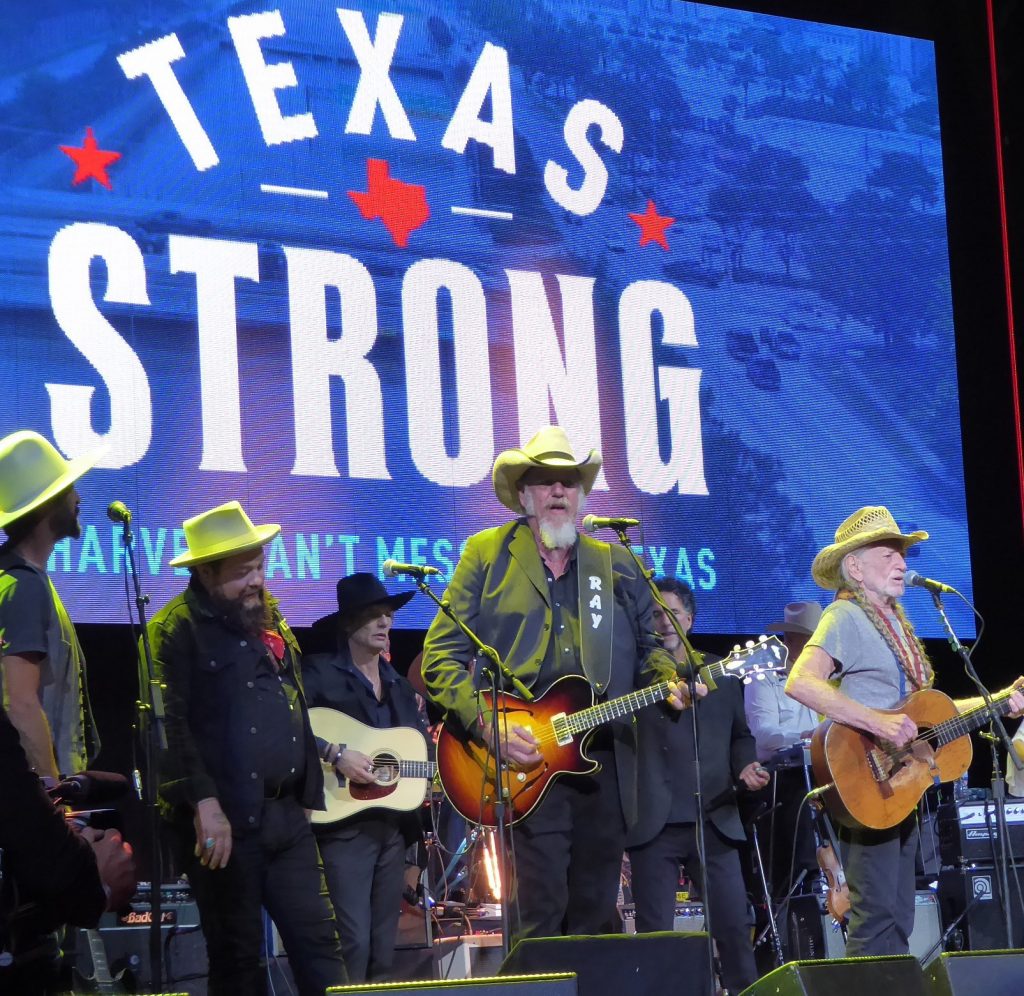 Next post Book Review: "Woman Walk the Line: How the Women in Country Music Changed Our Lives"