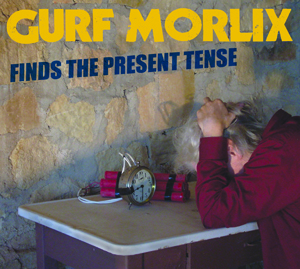 “These are my blues,” declares Gurf Morlix at his most morose near the end of Finds the Present Tense. “I’m gonna wallow in them allllll night long.” Fair enough: This is his album, dammit, and he’ll wallow if he wants to. Longtime fans of Morlix know that the guitarist/producer-turned-solo artist is actually not averse to a little levity or joke now and then; this is, after all, the guy who titled his first album Toad of Titicaca, and whose latest features a cover photo of him staring down a ticking time bomb (Present Tense, get it?). But bar a few delightfully wry exceptions (the cast-of-Bonanza recitation “Dan Blocker” from his debut springs to mind), Morlix does not dabble in the school of songwriting that Townes Van Zandt called “zippity-do-dah.” And Finds the Present Tense, his eighth album and first collection of new originals since 2009’s Last Exit to Happyland (the gap filled by his 2011 tribute album, Blaze Foley’s 113th Wet Dream), is just about his bleakest batch of zippity-free tunes yet. Opening with a prison lament is kind of par for Morlix’s course by now, but in stark contrast to “Killin’ Time in Texas” and “One More Second” (the first tracks on 2007’s Diamonds to Dust and Last Exit, respectively), “My Life’s Been Taken” doesn’t wrap its gloom around a killer hook; as Death Row dirges go, this one makes Steve Earle’s “Billy Austin” sound like a toe-tapper.

The air of foreboding doom, desperation, and doubt persists throughout the entire set, which makes Finds the Present Tense a somewhat harder Morlix album to warm to on first or even the first three listens than most. But give it, say, four listens, and it cuts as deep as anything he’s ever done. There’s exquisite but understated beauty sewn into the ache of songs like “Walk Away” and especially the devastatingly vulnerable closer, “Empty Cup.” And the (slightly) more up-tempo songs, like “Present Tense” and “Bang Bang Bang,” offer just enough rhythmic punch and patented Morlix bite to jump out as assertive stompers straight away. “Bang Bang Bang,” in fact, may well be one of Morlix’s best songs to date, taking dead aim at America’s gun lust through a series of vignettes ranging from nostalgic (old Roy Rogers Westerns) to personal (the murder of his friend, Blaze Foley) to chillingly prophetic (“Guns in backpacks, guns in schools, we’re a bunch of gun-carrying fools.”) It certainly ain’t funny “hah-hah,” but lyrics just don’t get much more present or tension tickling than that.
— RICHARD SKANSE