Foster & Lloyd, together again Radney Foster and Bill Lloyd reunite for first album together in 20 years 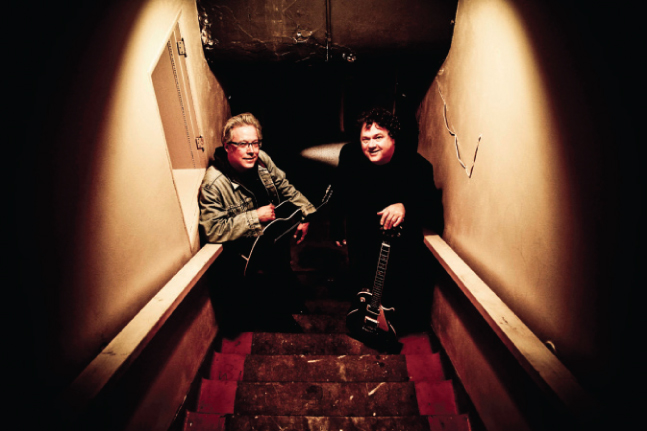 The potent songwriting duo of Radney Foster and Bill Lloyd deftly skirted Nashville’s fringes with three straight albums — Foster & Lloyd (1987), Faster & Louder (1989) and Version of the Truth (1990) — that effectively injected a gestating Americana genre into Billboard’s country Top 50. Two decades after an amicable split, they’re back with It’s Already Tomorrow, a fourth studio album due in “late April or May.”

Why reunite after all this time? The celebrated songwriting duo clarifies with their first joint interview in 20 years.

“It was kind of organic,” Foster says, explaining that a one-off gig together at Music City’s legendary Bluebird Café evolved into an entire new album. “We thought, ‘How great would it be if we wrote a new song to go along with?’ We ended up writing two [‘Hidin’ Out’ and ‘Just This Once’]. It went so well, we decided to try to get together every Wednesday for a month and see what happened. We did a new song each time. So, we went, ‘Yeah, we ought to make another record!’”

It’s Already Tomorrow, which was unavailable for advance listening at press time, took shape in two installments. “We did some of it in the spring, and then Radney went on the road to promote his [solo] album, Revival,” Lloyd says. “I was out doing sideman stuff with Cheap Trick in Las Vegas. Radney flew out to Las Vegas, where we cut the second half of the record in December.”

Petersson is joined by other high-profile players on It’s Already Tomorrow, too, including singer Beth Nielsen Chapman, legendary steel guitarist Lloyd Green (the Byrds, Paul McCartney, Ricky Skaggs), and E Street Band bassist Garry Tallent. Plus, mandolin ace Sam Bush assists on Foster and Lloyd’s rewrite of “Picasso’s Mandolin,” a cheeky tune they wrote years ago with revered songsmith Guy Clark. “He was born in Spain and died in France,” Clark sings on the version he cut on 1992’s Boats to Build. “He was not scared of baggy pants.”

Foster and Lloyd fondly recall their early years — a run that included the hit singles “Crazy Over You,” “Texas in 1880,” “What Do You Want From Me this Time” and “Fair Shake” — as a turning point on Music Row. “Robert (Earl) Keen was living in Nashville at the time and struggling and not doing well,” Foster says. “Then Lyle Lovett came on the scene and Rodney Crowell made the best country record he ever made, Diamonds and Dirt. Steve Earle called it the great credibility scare. Nashville was artistically wide open in a way that it isn’t today in mainstream country music.”

At least one high-profile career blossomed directly from Foster and Lloyd’s presence in that burgeoning scene. “If there’s a reason that I’m here in country music, it’s because I heard Foster and Lloyd sing ‘Crazy Over You’ on TV once,” Darius Rucker, the former Hootie and the Blowfish singer and hot mainstream country property today, revealed to this writer in an interview two years ago. “I ran to the store and opened that record and said, ‘Man, I can do this if I want to.’”

Foster and Lloyd will hit the road this spring to tour behind It’s Already Tomorrow. Among the dates already confirmed are the Texas Music Revolution Fifteen on March 19 at SouthFork Ranch in Dallas (also featuring Robert Earl Keen and Old 97’s), and the Old Settler’s Music Festival, set for April 14-17 at the Salt Lick BBQ Pavilion and Camp Ben McCulloch in Austin. Other artists on this year’s Old Settler’s lineup include the aforementioned Sam Bush, the Avett Brothers, Jimmie Dale Gilmore and the Wronglers, Richard Thompson, the Gourds, Jim Lauderdale and the Band of Heathens.

Next post Rock the Goat: The Love Boat vs. Lip Rot