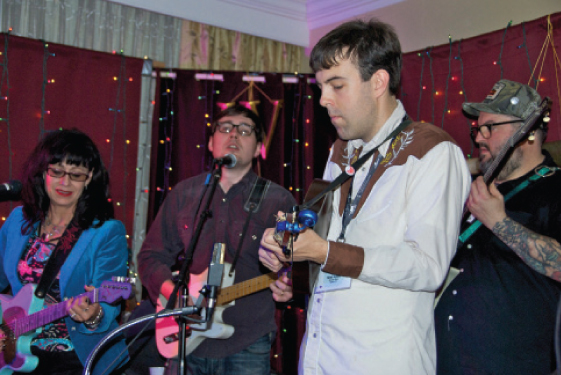 After five years in “the home of the blues, the birthplace of rock ’n’ roll,” the International Folk Alliance Conference bid adieu to Memphis with its best-attended confab ever. Several hundred Folk Alliance members from multiple continents ascended on the Memphis Marriott Feb. 22-26 to share their music, gather wisdom and gain inspiration at the 24th annual gathering of venue and label owners, talent buyers, promoters, managers, DJs and of course, players.

In addition to nightly showcases filling three floors of hotel rooms and cleverly themed suites (such as the “Wine & Nut Room,” where Will Sexton, Charlie Faye, BettySoo, John Fullbright, Rosie Flores, Chris Scruggs, Atomic Dou and others hung out), there were off-site events such as the impromptu Lone Star Music showcase at the Brass Door, a charming Irish bar where Miles Zuniga, Tim Easton, Steve Poltz, Susan Marshall and HalleyAnna Finlay gathered. High-profile personalities like Jim Lauderdale and Mary Gauthier were spotted all over the place, including the popular Red Beet Records showcase. An enthusiastic Gauthier said at one point, “This is my tribe. I’m here to hug people and be part of the family!”

Though Bob Lefsetz, author of the widely read music-industry “Lefestz Letter,” was the keynote speaker, the conference’s focus on Woody Guthrie’s 100th birthday led some to wonder why that honor wasn’t given to Robert Santelli, executive director of the Grammy Museum, who’s coordinating a year of special events with Guthrie’s daughter, Nora. Copies of Santelli’s new book, This Land is Your Land, his second tome about the man considered the father of folk music, didn’t show up in time for a scheduled signing, but he did appear on a “Meet the Authors” panel and moderated another titled, “The Influence of Woody Guthrie.” That discussion, featuring Jimmy LaFave, Eliza Gilkyson, Joel Rafael, and Ellis Paul, touched on not only the impact of Guthrie’s once-blacklisted work, but the essence of folk music itself — and the fact that, as Santelli noted, the medium “isn’t galvanizing as an agent of change these days.”

Still, it was clear from the popular Guthrie song pulls, film airings and 100th birthday show that his music — and messages — still mean a great deal in the folk realm. As the Folk Alliance prepares to convene in Toronto in 2013 and in Kansas City, Mo., for five years after that, it’s a safe bet that attendees will continue to celebrate Guthrie, Dylan and others who taught us how to touch hearts — and change the world — with a song.