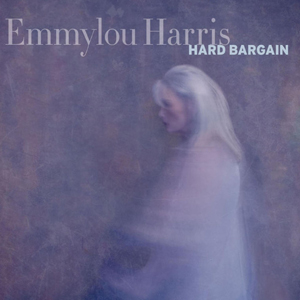 Throughout her career, Emmylou Harris has served as the sweetheart of the rodeo, progressive traditionalist, siren of the alt-country movement and a songwriter who knows no boundary. In recent years, working with Daniel Lanois and Buddy Miller, there was a conscious move to atmospherics and clouds of emotion — which served the Alabama-born Harris’ silvery voice, offsetting its luminous quality with a diaphanous curtain of musicianship. Hard Bargain, Harris’ latest, continues placing her shining voice front and center on the first collection of songs she’s penned since the soul-plumbing Red Dirt Girl. Teaming with Jay Joyce, the producer best known for Patty Griffin’s Flaming Red and the first albums by hyper-kinetic Kentucky rockers Cage the Elephant, the evocative musicianship has been bulked up by leaning down.

Three musicians — Harris, Joyce and multi-instrumentalist Giles Reeves — conjure waves of sound that create a fullness for the stories to float upon. Whether the banjo-speckled Ron Sexsmith-penned title track, the buoyant dog-rescue kicker “Big Black Dog” or the rat-a-tatt starkness of the social commentary and empathic history of a lynching-cum-elegy “My Name Is Emmett Till,” the recording reveals the songs’ complexity by leaving room to breathe. A searching work, Hard Bargain pulls no punches. Harris looks straight into the legacy of her mentor Gram Parsons, barely exhaling, “To everything there is a season, every blessing has a cost/So I took what you left me, put it to some use …” on the hard-shuffling opener, “The Road.”

Tone set, Harris considers the difficulty of finding love as we mature (the weightless, yet aching “Lonely Girl”), the loss of her dear friend Kate McGarrigle (the Appalachian “Darlin’ Kate”) and the suspended exhaustion of modern life (the hushed waltz “Good Night Old World”) — as well as the fierce strength of the vibrant Cresent City (“New Orleans”), self-reliance as virtue/burden (the rhythm-driven “Nobody”) and a swaggering truth ’n’ road life percolater (“Six White Cadillacs”).

Somehow for the dour recognitions, Harris believes love is infinite — and she reaches towards the vastness. There is an otherworldliness to the album’s closing “Cross Yourself” that is neither hardcore God nor New Age boosterism; rather it is a celestially-grounded hymn of attraction, consolation and the willingness to embrace what lies ahead. Spirituality? Absolutely. But it’s more the comfort of knowing that eternity is now, love is truth and willingness is the ticket in. Harris, who has loved greatly, lost profoundly, maintained her integrity over four decades and continues to follow her muse rather than the marketplace, is truly the distaff side’s Neil Young. Willing to pull back the curtains on doubt, frailty, primary need and reality, she comes at her latest record with an even greater vulnerability than most introspective songwriters embrace. Is there a happy ending? Hard Bargain suggests that if you lead a moral life, the outcome is all in how you choose to view it.

Beyond social consciousness and a near Buddhist compassion for self, others and the cosmos, Harris remains a curious soul about the rhythms, dynamics, parts and solos that exist in service to that magical voice. Joyce understands her instrument, how to set it off, but also how to create arrangements that truly support the emotional core of each song. A wonder — and the hint that there’s more and better to come. — HOLLY GLEASON

Next post Cody Canada and The Departed: "This Is Indian Land"