Cody Canada and The Departed: “This Is Indian Land” 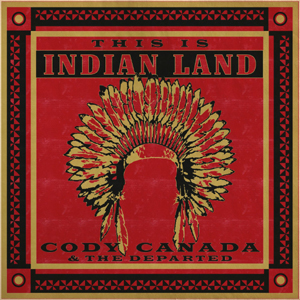 CODY CANADA AND THE DEPARTED
This Is Indian Land
Underground Sound

If things had played out differently — or, let’s face it, the way most Cody Canada fans probably would have preferred — this would have been a Cross Canadian Ragweed record. Even before the release of what turned out to be Ragweed’s swansong, 2009’s Happiness and All the Other Things, Canada insisted that the follow-up effort was going to be a tribute to their favorite Oklahoma songwriters. By early last year, they’d started rehearsing, road testing and recording some of the material, like the Randy Pease-penned love song for a pawnshop guitar, “The Ballad of Rosalie,” and they even joked about calling the album Contractual Obligations — a parting middle finger to the Nashville-based major label that they’d been signed to since 2002. But then the band broke up, ostensibly because drummer Randy Ragsdale wanted to spend more time with his family. They honored a handful of dates still on the books, but by early fall, frontman and lead guitarist Canada and bassist Jeremy Plato were forging ahead with the Departed, their new band with Texas blues guitarist Seth James and two other old friends from Oklahoma, drummer Dave Bowen and keyboard player Steve Littleton. This Is Indian Land, Ragweed’s orphaned Okie-tribute project reborn with a much more honorable name, is the Departed’s maiden voyage.

It’s also, front to back, the best damn record that Canada’s ever made.

Make no mistake: On a good night, Cross Canadian Ragweed was hands down the mightiest Red Dirt/”Texas music” band of its generation. But for all their chemistry as a unit and success over their 15-year run, they never made a studio or even live record as full-on entertaining as this, let alone one with the bar set so high in terms of material. Ragweed wrote more than a fistful of solid songs, but This Is Indian Land cherry picks its cuts from some of the finest songwriters the OK State has produced this side of Woody Guthrie. Admittedly, most folks not intimately familiar with that scene will have probably only ever heard of three of them: Leon Russell, J. J. Cale and Kevin Welch. But others, like Tom Skinner, Greg Jacobs, and the late Bob Childers aren’t represented here because they came up as pups at the same time as Ragweed, a la Stoney LaRue or Jason Boland; rather, they’re here because there wouldn’t have been a scene for said young guns to come up on without them. There’s 15 songs on this album, and not a dud in the bunch; it’s enough to make even the most stubborn of Texas songwriter fans sit up and take notice of how much serious talent there is north of the Red River, too.

As good as the songs all are here, though, it’s the performances that really shine. Had Canada made this album with Ragweed, the result would have been an entirely different and arguably inferior beast, if only because it would have been all too easy for a band with that much history together to knock out a covers album on autopilot. But the Departed is a band with something to prove — and the collective balls to not just pick up where Ragweed left off. The voices of Canada and Plato (who sings lead on one song, “Long Way to Nowhere”) sound familiar enough to lure old Rag-fans in, but the introduction of former jazzbo Bowen’s swinging drums, Littleton’s rollicking piano work and especially James’ soulful, roadhouse blues licks as a foil to Canada’s own more “Wang Dang Sweet Poontang”-flavored classic rock chops, keep the record wildly satisfying and full of sonic surprises the whole way through. There’s no easing into it, either: Randy Crouch’s way-out-there space jam “Face on Mars” opens the set, and even that’s not half as funky as the band’s Shaft-worthy swagger through Kevin Welch’s “True Love Never Dies.” Welch himself pops up to share vocals on another song of his, “Kicking Back in Amsterdam,” while Leon Russell’s “Home Sweet Oklahoma,” J.J. Cale’s “If You’re Ever in Oklahoma” and Tom Skinner’s “Water Your Own Yard” are all served up with swaggering groove to spare. And the more laid-back fare is equally compelling. You can practically smell the fresh-brewed coffee and feel the breeze through the creaky old screen door in the Bob Childers/Medicine Show co-write “Make Yourself Home,” and Greg Jacobs’ beautiful “A Little Rain Will Do” takes best-of-show with not only the album’s finest melody and lyric, but an absolutely flat-out stunning vocal by Canada.

Where exactly Canada and the Departed go from here should be interesting. They’ve certainly got their work cut out for them in the songwriting department. But if the performances captured on This Is Indian Land are merely a tease of what this band can do when it’s just getting warmed up, these boys from Oklahoma and their adopted Texas blues brother are primed for a ferociously entertaining ride. — RICHARD SKANSE