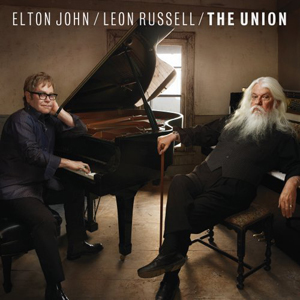 Perhaps the most disturbing thing about The Union, the much-anticipated collaboration from two of rock music’s most enduring pianists, is that it’s nice. Downright perfect, even. Producer T Bone Burnett crafted a sonically polished, well-played collection of songs that demonstrate each musician’s abilities to great effect. And yet …

Leon Russell, the Oklahoma maverick who could partner with Willie Nelson or Delaney & Bonnie, has always been a firebrand, capable of the kind of explosive pyrotechnic intensity that can leave listeners emotionally shellshocked. Elton John, more the Brit flamboyant bravado factory — long on theatrics in every sense of the word — was the genius soundtrack for the post-Hippie generation, trying to untangle all that had happened. They are both singular artists, truly kinetic unto themselves. But what should have been a true catalytic convergence — each triggering things in the other, driving them forward, higher — is, on The Union, more a very polite, structured meeting of legends, each bowing to the other from across the room. There is no doubt the esteem each holds the other in, but that isn’t enough to ignite genuine sparks.

Technically, it’s all here: pure sonics, gospel undertows, churning rhythms, rolling waves of piano notes and steamy clouds of B3 organ. For grazers of “musical moments,” who are perhaps more interested in the notion than the passion, this is a must have. John’s mirthful “Monkey Suit,” the chugging country-esque “Jimmy Rodgers’ Dream,” with its puddles of steel guitar, Russell’s ironically roadhouse “If It Wasn’t For Bad,” and the elegantly (if treacly) hopeful “Never Too Old (To Hold Someone)” all demonstrate the breadth and diversity of the two artists’ reach.

But such clinical excellence doesn’t always translate to genunine thrills. Indeed, it’s The Union’s more worn-and-frayed moments — all too rare — that offer the most intrigue. The steamy regret of “I Should Have Sent Roses” is marked by the banged-up roughness of Russell’s voice, fresh from the brain surgery that saved his life; it’s the reedy instrument of a survivor tallying the cost and making peace with the reality he’s now facing. That brutal nakedness defined the man whose “A Song for You” was the definition of devotion throughout the ’70s. It is not pretty, but it’s real, and unforgettable.

Rosanne Cash once declared, “There’s no passion in perfection.” Perhaps this whole project just started too front-loaded with expectation, too self-aware of its own potential significance, to ever realize any of the loose-limbed, greasy, banging-in-the-wind foment both of these artists’ legends were built on. Once you start thinking, it becomes all about maintaining standards — and combustion is the result of things blowing up, not calculation. To that end, The Union works on many levels — just not the one true students of their game might have hoped for. — HOLLY GLEASON