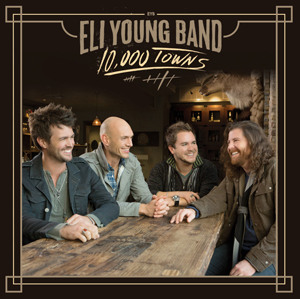 Having already amassed a pocketful of Top 40 hits on the national country singles chart — including a pair of No. 1s with “Crazy Girl” and “Even If It Breaks Your Heart” — the Eli Young Band has proven itself to be the Texas country band of the last decade with the longest reach across the state lines. That their songs appeal to everyone from college kids to soccer moms to radio programmers effectively certifies them as mainstream, and to call them that is not a slight. Anyone can just aim for the middle ground; but to master it at the level they have, using their slick, guitar-driven rock aesthetic showing hints of twang here and there to polish off hit after memorable hit takes real know-how and commitment. Hell, if it was easy, you can bet they’d have a lot more Texas company with them out there in radio land.

The new 10,000 Towns finds the Eli Young Band picking up right where 2011’s Life at Best left off, gathering steam and sounding sleeker and more focused in their pursuit of chart-toppers by the mile. Frontman Mike Eli’s vocals have grown stronger and continue to proffer a quality of aching sincerity, and the hooks are reliably catchy and primed for the airwaves. Of course, generally standard country-flavored themes remain the order of the day here, both lyrically and stylistically. The album’s second single, “Dust,” is about a girl leaving town to chase her dream, while the small-town-slice-of-life laundry list title track (penned by noted hit maker Craig Wiseman) and the smash single “Drunk Last Night” deliver their lines in the currently fashionable pseudo hip-hop manner that’s made Luke Bryan a superstar. That kind of stuff might not win them much cred with the “Nashville sucks” types back home, but then again, the Eli Young Band left Denton in the dust to chase their dreams a long time ago, and on 10,000 Towns they sound very much like a band that knows where it wants to go and exactly how to get there. — KELLY DEARMORE