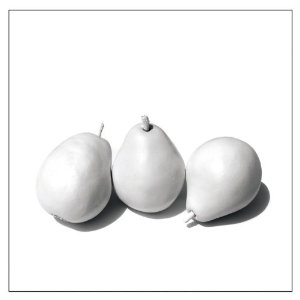 Album reviews are too often framed by the “so-and-so’s best album since …” boilerplate. Such is a difficult construct to apply to Dwight Yoakam, because this purveyor of his own brand of slyly oxymoronic progressive/retro country music hasn’t really laid an egg since introducing himself with Guitars, Cadillacs, Etc. more than a quarter century ago. 3 Pears is notable as his first set of original songs in seven years, but its predecessor, Blame the Vain, was a fairly crisp and spirited album. So I’ll not saddle 3 Pears as the “best since” anything, but it seems safe to say it’s his most beguiling album since 1995’s masterwork Gone — evidenced most superficially by the lyrical use of the word “giraffe,” undoubtedly a first for Yoakam and perhaps all of country music. But there are also instrumental touches that tie 3 Pears back to Gone: the Bacharachian brass on “Never Alright,” the girl group sha-la-las and Motown bass on “Take Hold of My Hand,” and the Everly Bros.-meets-Link Wray attack of the album’s stickiest track, “A Heart Like Mine.” And to sate the true traditionalists, there’s the straightforward, buzz-saw honky-tonk of “Dim Lights, Thick Smoke,” a fuzzed-out take on a tune penned by the mid-century string-wizard Joe Maphis with his wife, Rose Lee.
Much attention has been given to the fact that Beck lent a hand with production (and handclaps) on a few tracks, and that the uptempo opener “Take Hold of My Hand” is a Yoakam co-write with Robert “Kid Rock” Ritchie. But even when he was collaborating with producer/guitarist Pete Anderson — who went his own way after 2003’s Population Me — Yoakam has always come across as a watchmaker with his recordings: exacting with his sounds and particularly his lyrics. And to their credit, the interlopers here seem to have given Yoakam a nudge without leaving fingerprints on the record. It’s lyrically concise, a Yoakam trademark, with tightly wound variations on the subject of bad love. And it’s sonically expansive, which is the quality that has consistently kept Yoakam out of the one-and-done purgatory of those who traffic in the past. — ANDREW DANSBY