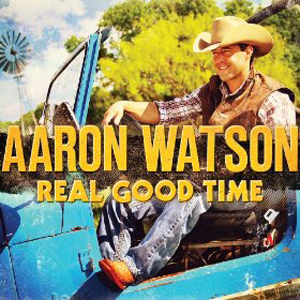 Aaron Watson’s built an A-list Texas country career out of knowing just how to rock the honky-tonk without going too far in either sonic direction. Slick yet sincere, Watson will likely continue to be a strong regional radio presence even though his latest album, Real Good Time, is a perplexing mixed bag affair. On the one hand, Watson doesn’t mess with his musical formula in the least here, and based on that, most long-time fans will probably be pleased with the record. What negatively sets this album apart, though, are the mind-numbing collaborations and reworked popular tunes from his back catalog, which come off as unnecessarily desperate decisions for a performer of Watson’s established stature. Granted, thanks to most of the originals being done in Watson’s signature revved-up, sawdust-shuffling style, there’s still keepers here, most notably the touching tribute to Lane Frost, “July in Cheyenne (Song for Lane’s Momma).” But retreads such as “Reckless” and his duet with Willie Nelson, “Honky Tonk Kid,” are pointless inclusions that bring nothing new to the table. “Hey Y’all” and the joint tune with Kevin Fowler and John Anderson, “Duck Blind,” are embarrassments in their desire to give-in to the lowest country denominators. And the best that can be said about Watson’s collaboration with Josh Abbott and Pat Green, “Texas Boys,” is that that particular generic ode to bad-boy behavior was a far better song the first time it was recorded — back in 1992 by Garth Brooks and Chris LeDoux, under the title “Whatcha Gonna Do With a Cowboy.” Such is ironic, given that Watson and Justin McBride also offer up an inoffensive take on “Cadillac Cowboy,” which LeDoux also fact is, the man can do better. — KELLY DEARMORE