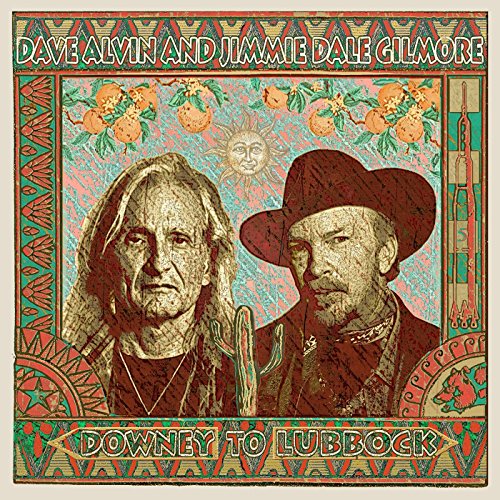 DAVE ALVIN & JIMMIE DALE GILMORE
Downey to Lubbock
Yep Roc
Effective as they may be for publicity, ticket sales, and award nominations, duo collaborations by established solo acts rarely result in objectively great albums. Quick: try to recall one song from 2016’s Colvin & Earle, let alone from either of the highly lauded but not-especially-revelatory recent sets by Emmylou Harris and Rodney Crowell. But damned if Downey to Lubbock’s curious pairing of California roots punk Dave Alvin and Texas cosmic folkie Jimmie Dale Gilmore isn’t just a rare keeper but jam-packed with genuine surprises at every turn. Roaring through a diverse but cohesive set of vintage border radio rhythm & blues (Lightnin’ Hopkins, Brownie McGhee) and top-shelf contemporary songwriter fare (Steve Young, Chris Gaffney, and Alvin himself), both men deliver some of the most inspired performances of their respective careers. And this isn’t just two pros swapping turns at the mic, either. There’s real chemistry at work here, with Alvin’s “wild blues Blaster” guitar drawing Gilmore out of his “old Flatlander” shell and, well, vice versa; often as not, it’s Gilmore taking the lead on the rowdier numbers, practically daring his slightly younger West Coast amigo to turn it up and keep up. And while both men bring sincere, haunt-you-for-days gravitas to the more somber selections (most notably Gaffney’s “The Gardens” and Woody Guthrie’s “Deportee (Plane Wreck at Los Gatos)”), it’s the amped-up, playfully self-referential bonhomie of the title track and the shock of bracing new life they bring to that old ’60s hippie warhorse “Get Together” that best sums up the magic that happens when these two do just that — making Downey to Lubbock not just memorable but worth many a return trip. — RICHARD SKANSE