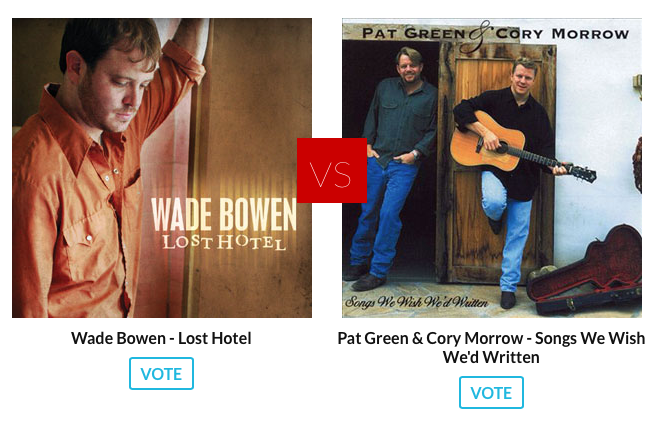 Sample only. Voting begins Monday, May 23!

On Monday, May 23, LoneStarMusicMagazine.com will be premiering an exciting new feature: interactive, fan-voted LSM Tournament Brackets — beginning with a little battle royale we’re humbly calling “The Ultimate Texas Country vs. Red Dirt Album Showdown.” Looking back over the 17 years that Lone Star Music has been in operation (beginning with the launch of our specialized E-Commerce store, LoneStarMusic.com, in 1999), we’ve compiled a list of 64 different albums from both sides of the Red River — and then taken it upon ourselves to seed ’em, pair ’em, and make ’em fight to the finish for the coveted title of “Album of the LSM Era.”

All of this, of course, is just in the name of good, clean fun — and maybe to stir up a little heated debate amongst fans. Because it’s the fans who will determine the outcome of every single round and matchup: our job, as tourney host, is just to set the whole thing up, lay down the rules, and then make sure everyone fights fair (and civil) while we kick back, make bets, and get our popcorn ready. 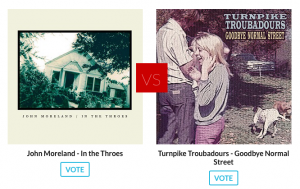 Sample only. Voting begins Monday, May 23!

Although artists from both sides of the Texas Country and Red Dirt divide have long coexisted happily in our scene, in the spirit of the heated rivalry between the Longhorns and the Sooners, we’re pitting the Texans and the Okies against each other — with each side represented by 32 different albums by the biggest names in the regional music scene. What do we mean by “biggest”? Well, being a record store, we used album sales (through LoneStarMusic.com and our physical store, Superfly’s Lone Star Music Emporium, in San Marcos, Texas) to form the backbone for the tournament entries and seeding. But we also asked ourselves which albums over the past 17 years have had the most cultural impact on the Texas Country/Red Dirt scene and provided the backdrop and soundtrack for those best of times where recollection of events and music will forever be intertwined.

This won’t be our last LSM Tournament Bracket, either. After fans pick the winner in our Ultimate Texas Country vs. Red Dirt Album Showdown, we have all sorts of other LSM tourneys ready to spring on y’all: songs, songwriters, venues, eras, etc. But in tribute to the booming regional music scene that inspired the launch of LoneStarMusic.com in the first place, we’re going back to our roots for this first one. So take the weekend to revisit and play all of your old favorites from Pat Green, Cross Canadian Ragweed, Reckless Kelly, Jason Boland, Randy Rogers, and Miranda Lambert, along with later-day contenders like Turnpike Troubadours, Josh Abbott, John Fullbright, and Kacey Musgraves. Fall in love with them all over again. And then, come Monday, get ready to start watching them throw down and get medieval on each other.