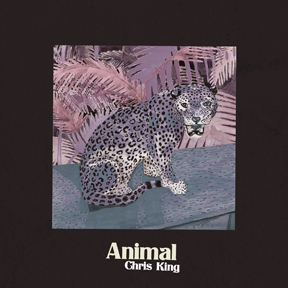 If you follow Austin songwriter Chris King on Twitter, you might have noticed that he can be a bit of an instigator, quick to call bullshit and occasionally prone to gleefully poking fun at certain other artists on the Texas music scene with a dogged persistence that could probably be deemed borderline cyber bullying. But where he pulls those online punches with a cheeky smirk, King holds nothing back in his songs, and on his new album, every blow is aimed square and full-force at his primary target: himself. “The ways that I keep changing, they’re tearing me apart / The lies that I keep telling, they’re never gonna stop … I am terrible to you,” he confesses to a lover outright in Animal’s title track. The song opens the album with the somber, reverb-laden heavy sigh of a self-condemned man already resigned to his fate: “Inside every man an animal runs wild, and it’s right beneath the surface and it’s eating me alive.” The tempo picks up significantly on the second track, “Never Make It Last,” but the rush of screaming guitars offers little reprieve: “The hopes that I have for my future,” King sings, “they come crashing down like waves.” And though flickers of hope and redemption occasionally slip through the darkness — most notably in the surging, open-road chorus of “Borderland” — for the most part Animal plays out like one long, brutal tough-love intervention, with King himself squirming in the hot seat. Some fans may squirm a little, too, as the album finds King purposefully straying very much outside of his usually more sonically conservative country comfort zone. Doubtless most of these songs could have been presented just fine with standard acoustic singer-songwriter arrangements, but John Ross Silva’s production — packed full of Scott Davis’ lead guitar and Wade Josey’s brooding synth work — keeps King on edge the whole way through, his voice scrambling and sometimes outright straining for purchase against the imposing wall of sound. The results may not always make for easy listening, but they more than live up to King’s developing rep as one of the Texas music scene’s most compelling agent provocateurs — not to mention the album’s name and cover art: This Animal ain’t no pussy cat. — RICHARD SKANSE