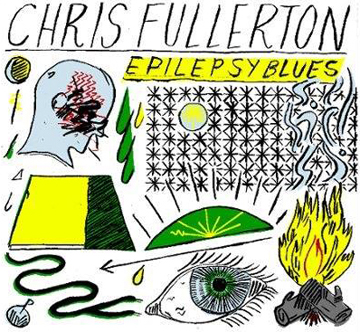 Some albums are such a mind-blowing fine surprise that they daunt a reviewer’s skill to summon up heavenly-high praise. Epilepsy Blues, the debut full-length release by the virtually unknown Austin-based Chris Fullerton (who originally hails from New Jersey), is one of those all-too-rare magical recordings.

It’s neo-traditional country that puts equal accent on both poles of the equation with a masterly finesse, turning that notion into a revelatory musical Zen koan. It has a hauntingly rustic and loosey-goosey vibe that feels like a lost gem from Hank Williams and his Drifting Cowboys tracked some seven decades ago, yet it was recorded with 21st Century clarity in a South Austin living room on a modern home recording rig with Fullerton playing most all the parts other than violins and steel guitar.

Sure, Williams wanders through Fullerton’s voice, songs and sound like a benign specter offering divine guidance. But Chris wisely processes such an essential influence through his muse and soul to fashion something that is at the same time warmly familiar yet all his own, Artists like John Prine and Guy Clark peer over Hank’s shoulder into Fullerton’s creative universe, especially the latter on the small yet potent details in the opening lines of the Cajun-smoked “Ma Chere Amie” — “The mosquitos are full of blood of my party guests / I got one hand on the frying pan and the other on a bottle of beer” — and the spare yet at the same time verdant simplicity of “Come On In.”

For all the echoing antecedents, Fullerton never trips into the sinkhole of imitation, and he deftly sidesteps any and all hoary cliches while summoning up his own resonant turns of phrase like “the whole town’s a can of beer.” Case in point is “Come to Texas” (from where that line comes), which in the hands of lesser talents would likely tumble into an overdone recitation of the merits of the Lone Star State. Instead it’s a lonely recitation of his tightly-circumscribed lowlife existence that serves as both an invitation and a call for salvation — and still manages to slip in “the weather’s fine and the stars are giants.”

Every song here is a number that will bring me joy and other deep feelings from the rich palette of human emotionality for the rest of my born days. But even among such gigantic creations, a few stand even taller. “I Feel Nothing” is such a potent plaint that it ironically evokes a panorama of palpable sensations. “Float On Up & See” generates an uplifting cushion of a cloud out of melancholia (“I would take her in the evening foaming at the mouth over God’s own son” … what can one say but, phew!). “El Paso Space Dance” plays like a jaunt through the Marty Robbins borderlands via flying saucer, and — bonus — as the chorus tells us, it’s a birthday song. And yes, Fullerton is an epileptic, and the title track captures the grim realities of the affliction with a wry mix of matter-of-fact acceptance and ironically buoyant esprit: “Well baby, get the valium from the drawer / ’cause these anti-convulsants just don’t work no more.”

Truly, from the opening a capella howl of “Whiskey, you come wash over me / Cause I’ve been underneath” to the sparkling final grace note of “Seven Roman Candles,” Epilepsy Blues” is a glittering treasure trove of gems, and about the truest country you’ll hear anywhere these days. Coming just a few weeks into 2017, I’m confidant that there’s no way I’ll hear a greater C&W disc before year’s end. I’m also hard pressed to recall just how damn long it’s been since I heard a roots recording that unfolds like an epiphany as this does. A new, genuinely great talent has arrived — just the kind of joyful kick we music lovers live for. — ROB PATTERSON