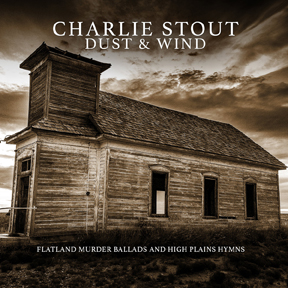 “Backstory” is a valuable commodity in a field crowded with talented if somewhat-similar singers and songwriters; hearing about the Braun brothers’ childhood family-band adventures or Ryan Bingham’s novel-worthy cowboy sojourns through France and Hollywood adds an air of mystique to their music that isn’t readily available to every suburban Texas kid with a guitar. Relative newcomer Charlie Stout doesn’t necessarily self-mythologize, but his debut record has a pretty fair backstory all its own. Hauling a four-track recorder out to an abandoned church in a New Mexican ghost town, Stout bared his solitary soul on eight songs’ worth of man-and-a-guitar intimacy suffused with the ambiance of crickets, gusts, and the occasionally highway or railroad sounds to remind the listener that the troubadour isn’t literally the last man on earth even if that is the prevailing vibe. It might not amount to much if the songs were mediocre, or even just conventionally good, but Stout specializes (or at least is momentarily focused on) some pretty high-stakes material: life and death, sin and salvation, temptations and executions and resurrections.  His gritty drawl and lyrical ability to swing back and forth between the abstract and concrete brings to mind other recent artists like Javi Garcia and Jordan Minor, along with that deeper well that goes back to Townes Van Zandt and the spookier side of Johnny Cash.  Tales of doomed outlaws on the run (“I See Stars”) or on the gallows (“The Hanging”) aren’t new concepts, but they are freshly compelling in Stout’s hands thanks to the detail and conviction therein. The doomed narrators in “Say Goodbye” or “Sinner’s Prayer” could be Wild West vagabonds or just your unfortunate next door neighbor, because the philosophical arcs of life and death come about as naturally to Stout as a detailed vignette. Eight songs is admittedly a bit slim for an album (although a 15-minute closing track of just the ambiance itself is a nice touch) but there’s not an unmemorable one in the bunch. The gonzo lyrical spitfire of “The Years That Go By,” the devilish narrative of “Set Your Eyes on Things Below” … for a shorter-than-standard solo acoustic project by a largely unknown artist, this record feels bigger than all outdoors. — MIKE ETHAN MESSICK

Previous post Colvin & Earle, together again for the first time