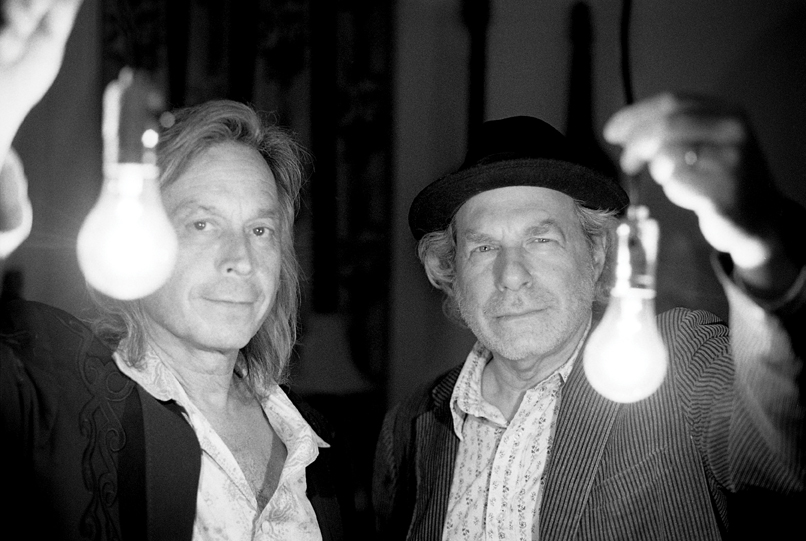 Buddy Miller and Jim Lauderdale have been friends and collaborators for so many years, they can record an entire album in less time than it takes most artists to lay down a single track. They made Buddy & Jim, their new duets album, in three days.

But it took them approximately 5,500 to get around to it. Give or take. 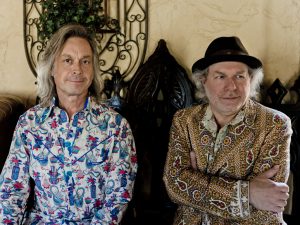 “We actually had time slated about 15 years ago, but it didn’t work out,” Miller says. Other pursuits got in the way, such as his work with Emmylou Harris, Robert Plant and his Band of Joy, Patty Griffin, Solomon Burke, the Carolina Chocolate Drops, and his wife, Julie. Not to mention solo efforts. Lauderdale was busy, too, writing hits for artists such as George Strait and Patty Loveless, recording and touring with Elvis Costello and releasing one or two albums a year on his own or with collaborators including Ralph Stanley, Grateful Dead lyricist Robert Hunter and “dream team” players James Burton, Garry Tallent and Al Perkins. And that’s not even counting 2012, a dizzying year for both. (More about that later.)

All of which explains why Lauderdale and Miller recorded Buddy & Jim so quickly. That was the only shared time window they had.

“Back in the day, that was not that unusual. By today’s standards, that’s crazy,” says Miller, chatting from his Nashville home, which doubles as his studio. “I don’t have any idea why, but it usually takes people a month to make a record—or more, if there’s a budget. But we figured we’re grownups; we could do this. So we got in and made it in three days, which was a blast.”

They hadn’t even finished all 11 songs — a combination of traditionals, covers, co-writes and individual contributions ranging from classic country to retro-rockin’— before they rolled tape. And they actually wound up with a few leftovers.

Miller says he initially resisted Lauderdale’s desire to write together. “I was like, ‘No, we don’t have time to make a record and write songs.’” he recalls. “He pushed … and he was right. I’m so glad he did. I pulled out a couple of scraps that I had and they got turned into good songs.”

He’s referring to two highlights: the opener, “I Lost My Job of Loving You,” and the sterling “That’s Not Even Why I Love You,” the latter co-written with Julie. She finished another, “It Hurts Me,” on their last recording day.

Lauderdale’s “Vampire Girl” had a more convoluted birth, starting with a mid-flight inspiration.

“This melody just had come to me, this guitar riff, so I sang it into a digital recorder,” he explains. “When Buddy and I were having our first meeting to talk about songs, I was lookin’ for it, and I couldn’t find it. Then I came up with something else, and lo and behold, I lost that as well. So I just started over.”

Lauderdale had reservations about that one; he worried it might be “too weird,” according to his partner.

“I really dug it,” says Miller, whose “Gasoline and Matches,” co-written with Julie, appears on a soundtrack compilation from HBO’s hit series, True Blood. “I don’t care if vampires are in fashion or out of fashion,” he adds, “they’ll always be special to me.”

Lauderdale and the now-late Frank Dycus wrote another tune, “Forever and a Day,” several years ago. Gary Allen had recorded it, but Lauderdale never had.

Their Johnny & Jack cover, “South in New Orleans,” is a remnant of an even earlier album concept, one Miller’s dreamed about for decades.

“When I was playin’ on the streets in San Francisco as a teenager to make money to eat, some lady stuck a $10 bill in my shirt pocket, and I went out and bought a used Johnny & Jack record,” Miller remembers. “I’ve had an attachment to Johnny & Jack for a long time. … I’m a duets fan anyway. I think two-part harmony is beautiful. Three-part harmony is a little too sweet, and the mystery is gone.

“Once in a while, obviously, you get something like Crosby, Stills, Nash & Young or the Pistol Annies, but mostly I go for that hard-core fix in the vocals,” he continues, adding, “Even back 15 years ago, we talked about a record called ‘Buddy & Jim Sing Johnny & Jack.’”

Collaborating comes easily to Miller and Lauderdale, regardless of the format. In the past decade, they’ve also teamed up to present the Americana Music Association’s annual Honors & Awards show; Lauderdale emcees and Miller leads the all-star band — when he’s not busy accepting awards. For his own work or collaborations with his wife, he holds a record 12 Americana awards (13, if co-producing 2011 Album of the Year winner Band of Joy counts). He’s twice been named Artist of the Year; Lauderdale received the inaugural Artist of the Year award in 2002.

In fact, Miller, 60, and Lauderdale, 55, are practically the genre’s official poster boys. They look good together, too, like silver-maned brothers from different mothers. Which is why, when they announced plans for Buddy & Jim at a 2011 AMA showcase, it was surprising to hear Miller say jubilantly, “This is our first gig together since we met!”

As they delivered a terrific set that included a gorgeous rendition of the oft-covered classic “Let It Be Me,” a twanged-up version of George Jones’ “Why Baby Why” and Lauderdale’s Jones/Gram Parsons ode, “The King of Broken Hearts,” Miller added, “We’ve known each other for 30 years and we’ve never done this.”

That is, they’d never shared a stage for a full set as duet partners, despite performing together countless times. But they’re so adept at exchanging good-natured repartee, they now do it weekly on “The Buddy & Jim Show,” on SiriusXM Radio’s Outlaw Country Channel.

The album’s title came from the radio show, but its roots actually reach to 1980, when the pair met in New York. The city had a healthy country scene then, centered, appropriately, at a place called the Lone Star Café. The Millers had moved there from Austin. Lauderdale came from North Carolina. They quickly began sitting in on one another’s gigs. After Miller took a break from playing, he jumped back in as the guitarist for Lauderdale’s band. 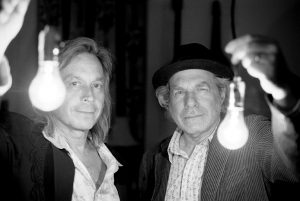 While trying to establish their careers, they more or less followed one other around the country, landing in L.A. and eventually, Nashville. Lauderdale even rented the attic apartment in the Millers’ 100-year-old Nashville home — till a hungry possum also moved in, apparently lured by Lauderdale’s tendency to leave forgotten food around, and caused what they now jokingly refer to as their “breakup.” (On the road with Harris when he got a call from his possum-perturbed tenant, Miller asked for a pet deposit. Lauderdale was not amused. End of rental agreement.)

But no mere rodent could chew through a bond like theirs. In the 20 years since Lauderdale got his own place, it’s fused into a hardcore mutual admiration society.

“He’s just amazing,” Miller says of his pal. “He’s so prolific and so good.”

To which Lauderdale rejoins, “To me, he’s a king.” Then he adds, “I’m just so happy for all that’s goin’ on for him.”

That would be a reference to Miller’s latest work — in 2012 alone, he produced albums for Band of Joy, Shawn Colvin and Richard Thompson (Electric, due Feb. 5), plus Buddy & Jim, and helped his wife work on several songs. He’s also helping T Bone Burnett produce music for the hit TV show Nashville, on which Miller also has appeared. That’s in addition to the radio show, an outgrowth of his 2009 “heart deal”— an attack and emergency triple-bypass surgery that occurred during the Three Girls and Their Buddy tour with Harris, Griffin and Colvin. While recovering, he finally activated his SiriusXM radio.

“I just fell in love with it,” he says. “My iTunes library is, like, 140,000 songs on my laptop that I take out on the road. I know a lot of stuff. But I kept getting turned on to great new music and old stuff I hadn’t heard. And I’d listen to it and I’d look around my place and think, ‘I’ve got this great studio that’s not a bad hang. I’ve got a lot of friends in this town and who come through town on the road, and I’d love to have a show and play music and expose some of the people I know and some of their stories.’

His next thought was, “I probably suck at this, so who better to do it with than my friend, Jim Lauderdale?”

They made a pilot with Griffin as their guest. Of course, it didn’t suck.

Miller, who produces the two-hour show himself, admits, “It’s a lot more time than I thought. But it’s worth it. I’ve had people over here that have been my heroes — and my friends.” Reeling off a list that includes Harris, Bonnie Raitt, Tony Joe White, Dan Penn, Thompson, Bobby Bare and Dallas Frazier (“one of the best songwriters to ever come out of this town”), he adds, “It’s a great hang and great to spend time with Jim, too.”

Sitting behind mics in the studio inspired them to revive their album plans. Then Miller’s label, New West, stepped in and asked them to get moving on it.

Lauderdale, meanwhile, was busy with a few projects of his own. In 2012, he recorded four albums in addition to Buddy & Jim. Carolina Moonrise, his latest collaboration with Hunter, came out in September, and they did another with the North Mississippi Allstars, Spooner Oldham and David Hook. Lauderdale also recorded in England with Nick Lowe’s band and did a follow-up to his “dream team” disc with Burton and Perkins. He also participated in a documentary about his life by Australian filmmaker Jeremy Dylan, whom Lauderdale has known since Dylan was 11; his father arranged Lauderdale’s first Australian shows. Titled The King of Broken Hearts, it screened in December at the Grammy Museum and Country Music Hall of Fame. And of course, there’s WSM-AM’s weekly “Music City Roots” show, which Lauderdale co-hosts from the Loveless Barn in Nashville; PBS has picked up the show for broadcast.

This year, Buddy and Jim are hitting the road together, including Texas stops. Maybe after that, they’ll add more tunes to those leftover songs and release another album. If they can keep each other entertained in the process.

“My whole criteria these days is, if it ain’t fun, I’m not doin’ it,” Miller notes emphatically. “Life’s too short.”

Good thing these two know how to use every minute.