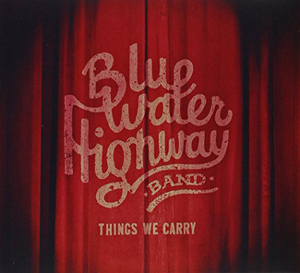 With a band name that sounds cooked up by an Americana band-naming app and a sound that seems (at least to the uninitiated) crossbred between the heart-on-sleeve eclecticism of the Avett Brothers and the more straightforward country-folk of the Turnpike Troubadours, Blue Water Highway could come off as calculated or generic. Perhaps they already know this, and perhaps that’s why they’ve poured so much soul into this project, blowing doubts into dust with every big-hearted hook and piquant vocal run from gifted lead vocalist Zack Kibodeaux. Plowing familiar ground but daring to dig a little deeper than most, Things We Carry has both the fulsome feel of a breakthrough and the beautifully textured feel of a bunch of old pros sifting through the roots-music and pop music playbooks and bending some of the best moves to their will. There’s some closing-time piano pop (“Q to Cortelyou”), some bluesy myth-making (“John Henry,” “Medicine Man”), a mournful modern hymn (“Voice in Ramah”), and several doses of their default jangly folk-rock, blessed with multi-instrumental textures by Greg Essington and Zach Landrenau, chiming harmonies from Catherine Clark, and the admirably assertive rhythm section of Daniel Dowling and Kyle Smith. It’s never less than pleasant, and often transcendent: The title track, more than just the most fully realized slice of Blue Water Highway’s blend of the adventurous and the tried and true, might be one of the best five minutes of new music you’ll hear this year. — MIKE ETHAN MESSICK