The Whiskey Sisters’ koozie pretty much nails it:

The problem with that, though, is that every first-year journalism major knows you never bury the lead — even if it’s only on a hunk of neoprene foam keeping the beer cold. So let’s embrace their somewhat non-PC vernacular and focus first and foremost on the two chick singers. 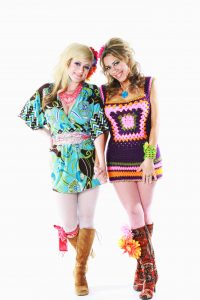 The Whiskey Sisters are Teal Collins Zee and Barbara Nesbitt, and they really aren’t sisters in the familial sense, of course. They’re from opposite ends of the country: Nesbitt a Georgia peach from deep in the heart of Dixie and Collins Zee a fun-in-the-sun West Coast California girl. Their pre-Whiskey personnas also reflect divergent paths. Nesbitt skewed more towards folkie singer-songwriter, and Collins Zee was the self-described “rockin’ belter” of the Mother Truckers, the band she co-fronted with lead guitarist and husband John Zee.

And yet, it was musical kismet when the two future siblings got together. “Somehow, for whatever reason, it meshes,” marvels Collins Zee.

“Teal and I made a strong connection right off the bat as friends, musicians and singers,” adds Nesbitt. “There was something that happened between us that was a little bit magical. And we were happy to discover that other people felt that way, too.”

That “other people” love them has certainly been validated over and over again. From their first gigs, audiences have been charmed by the sisters’ easy (and a bit nasty) repartee, their manic dance-and-sweat-inducing set-list of spunky originals and the coolest of covers, and especially their harmonies, as smooth and taut as a warming shot of Jameson’s on a chilly night in Dublin … or Dallas.

Incidentally, neither Collins Zee or Nesbitt come at those beautifully blended harmonies from a lot of formal training. Neither sang in choirs as schoolgirls. But they did have role models … and drugs.

“When you grow up listening to the Beatles and Crosby, Still and Nash,” Collins Zee offers, “you kind of just teach yourself by listening for the third and singing along.” Nesbitt is a tad more revealing of how she cracked the code. “I was 15 and had gotten really high. I put Simon and Garfunkel on the headphones and BING! I finally got it. From then on, I could not stop singing harmonies!”

The Whiskey Sisters received even more affirmation during this year’s SXSW, when they were tapped as Best New Band at the Austin Music Awards. In fact, the night turned into a veritable lovefest as the whiskey river overflowed in the Sisters’ direction. Both Collins Zee and Nesbitt earned honors for songwriting and vocals and the band was also ranked in the top 10 in several other categories.

And their self-titled debut album — sporting a retro-cool, Nancy Sinatra meets Austin Powers cover — is being played by by outlets as varied as SiriusXM’s Outlaw Country and Little Steven’s Underground Garage, reinforcing the wide appeal of their music. Released less than a year after their first live show at 2012‘s SXSW, the album’s delectable dozen tracks showcase the songwriting talents that both women bring to the table and prove that their playful suggestion that the band is like “ZZ Top … but without the beards” isn’t too far off the mark. The Whiskey Sisters have chops a-plenty … and know how to use ‘em.

This bounty of accolades and airplay has only served to amp up the buzz about the Whiskey Sister’s Thursday night Happy Hour residency at Austin’s Continental Club. At a recent evening at the packed venue, the badass band component of that Koozie brag was on display loud and clear and for all to see. Lead guitarist and Whiskey Hubby John Zee had just served up a series of scalding licks that left the crowd frenzied and his right index finger bleeding. Zee stepped to mic and asked, “Does anyone have a Band-aid, or, even better, some Krazy Glue?” After throttling back for a song or two as Zee nursed the damaged digit, a fan came running up with the requested tube of certifiably insane adhesive. Bassist Lonnie Trevino Jr. shouted, “Someone should record this and put it on YouTube!” And dang if somebody did.

The Whiskey Sisters are making plans to tour in Europe later this year after playing at the inaugural Bottle Rocket Festival in California along with bands such as the Kings of Leon and the Black Keys. The year will also find the Sisters making their first appearance on TV’s Austin City Limits.

So with all that is breaking their way, how will the Whiskey Sisters know when they’ve really made it? “We won’t be happy until we’re rich and in rehab,” jokes Nesbitt.

And with a name like the Whiskey Sisters, that ain’t all that far-fetched. Most gigs find at least two or three trays of whiskey shots making their way to the stage courtesy of adoring fans. Nesbitt calls it for what it is.

“It’s a necessary evil that must be endured for the greater good of the band,” she concedes. “Oh, the sacrifices we make … “

Previous post In Profile: Jason Boland and the Stragglers