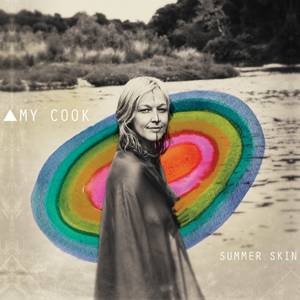 Amy Cook has been building an underground buzz with her poignant vocals and distinctive songwriting for almost a decade now, and her downbeat world view and affecting melodies are in evidence again on Summer Skin. Producer Craig Street (Norah Jones’ Come Away With Me) and a stellar backing band, including guitarist David Garza and Me’Shell N’Degeocello on bass, add to the music’s low-key charm, leaving the spotlight on Cook’s husky, soulful voice. Songs of wounded love, missed connections and ordinary tragedy abound. “Hello Bunny” warns little critters that it’s a cruel world; “Sun Setting Backwards” is a letter to a to a no-good lover who delights in breaking hearts; and the shadowy western twang of “It’s Gonna Rain” sets off a slow moody country song featuring familiar harmonies from special guest Robert Plant. The mostly mid-tempo arrangements tend to induce a trance-like state after a while, but those who like to dwell on life’s more difficult moments will find comfort in Cook’s melancholy musings. — J. POET