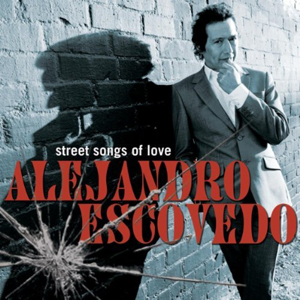 Early on Streets Songs of Love, Alejandro Escovedo hits you with two back-to-back rockers of such thrilling atomic swagger, every effusive superlative that’s been heaped upon him since No Depression crowned him “Artist of the Decade” barely halfway through the ’90s seems almost woefully insufficient. At his best, Escovedo has always delivered the goods promised by his critical praise and sterling reputation as a songwriter, performer and bandleader par excellence, and both “This Bed Is Getting Crowded” and its chaser, “Street Songs,” pack enough raw kick to carry an entire album. And as it turns out, they very nearly have to do just that to elevate the rest of Street Songs of Love up to just shy of the career-high bar Escovedo set with 2008’s Real Animal.

Here’s the straight dope on the former True Believer’s 10th solo album, and second since hooking up with Jon Landau Management (the folks behind Bruce Springsteen): It’s a very good record, but a far cry from his flat-out best. Maybe that just sounds like I’m playing the contrarian, given that the San Antonio-born artist, at the spry age of 59, has been riding an undeniable hot streak of late, both creatively and especially in terms of career momentum. But it does both Escovedo and his art a disservice to put every new project on a higher pedestal than the one before as an automatic rule of thumb’s up — or, worse, just because more people might be paying attention because some guy named Bruce happens to sing on a track. If anything, it’s a credit to Escovedo that Street Songs, which boasts at least half-a-dozen songs worthy of an Alejandro mix CD you might make to convert a newbie, is only his third-best album of the last decade.

Coming just two years after Real Animal doesn’t do this outing any favors. Whereas Real Animal — song for song, Escovedo’s finest hour since his 1992 debut, Gravity — was a precision-tuned marvel of lethal rock ’n’ roll autobiography, Street Songs feels scattershot and afterthought, as though it were assembled by Escovedo and returning glam-rock producer Tony Visconti (David Bowie, T. Rex) from its predecessor’s left-over spare parts and shrapnel. In fact, one song near the end of the album, “Shelling Rain,” actually first surfaced as a forgettable bonus track (in acoustic form) on some editions of Real Animal, and it still sounds half-baked.

Ditto the furious tempest of “Silver Cloud,” which rocks like a bastard but has little more to say than “I’m a man, I’m a man, I’m a man, I’m a hungry man.” The much-trumpeted “Faith” — the song featuring guest bellowing by Springsteen — doesn’t dig much deeper, though it’s not the song’s less-than- insightful lyrics (“You gotta have faith!”) that disappoint so much as the blunt hook. And as long as we’re nitpicking, let’s go ahead and throw the droning “Tula” in with the fat pile, too.

And yet, for all those little stumbles, when Escovedo and his tough three-piece band, the Sensitive Boys (guitarist/ keyboardist David Pulkingham, bassist Bobby Daniel and drummer Hector Muñoz), find their footing, Street Songs of Love can quite confidently kick your ass. In addition to the aforementioned one-two punch of “This Bed is Getting Crowded” and “Street Songs,” there’s the scrappy, viscous “Tender Heart,” as full-on aggressive (and nearly as nasty) as Guns N’ Roses’ “It’s So Easy” (“Roll over once, why don’t you/shake out of those pretty clothes?”) The opening “Anchor,” Titanic-sized heart on sleeve and all, is a glorious anthem every bit as exhilarating as Real Animal’s “Always a Friend,” and the more subtle “Undesired” comes mighty close, too. Meanwhile, the handful of haunting ballads — a time-honored Escovedo specialty — are dependably solid, though the elegiac “Down in the Bowery” sounds so much like an old Mott the Hoople track, Ian Hunter’s cameo on one verse almost goes unnoticed. Sequenced after the bruising “Tender Heart,” “After the Meteor Showers” offers lovely shelter from the storm, and “Fall Apart with You” tenderly wraps the album’s most beautiful melody around its most moving lyric: “She said her first love was her last/So she cries when she hears Johnny Cash.”

Honestly, there’s plenty of moments that good to be found throughout Street Songs, and every one of them further validates Escovedo’s by now pretty much bulletproof acclaim. But admitting that the man has made and most likely still will make better records than this one is OK, especially for longtime, well, true believers. Take it from the man (and the Boss): You just gotta have faith — and “sometimes you gotta lose it, gotta lose it/Just to find it again.” — RICHARD SKANSE

Next post The Trishas: "They Call Us the Trishas"