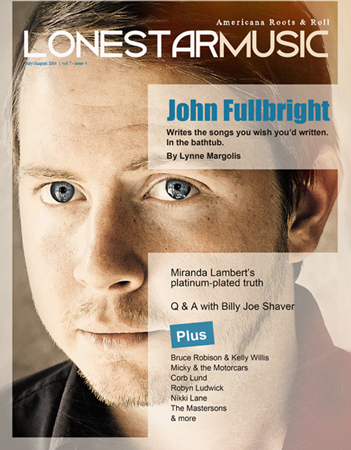 I can’t, for the life of me, remember what song it was that John Fullbright played the first time I saw him — but I damn sure remember the impact. 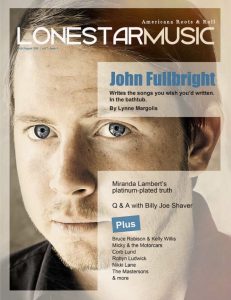 It was back in February 2011 at the 23rd International Folk Alliance Conference in Memphis, sometime well after midnight, when the private showcases overrunning the top three floors of the Marriott were in full swing. I’d wandered from room to room for what felt like (and probably was) hours, catching a song here, a short set there, and foraging for drinks and late-night snacks the whole time. The one room I kept going back to — both for the consistently stellar line-up and because they had a bottle of whiskey I really liked — was the Will Sexton-hosted “Wine & Nut” suite, which felt about as packed as a sold-out Cactus Cafe the whole night long.

By the time Fullbright’s turn came up, elbow room was at a premium — but you could have heard a pin drop the moment he started playing. Everyone in that room, which was probably at least 90-percent songwriters — many of them pretty well known, at least in folk/Americana circles — hung on every word that 22-year-old kid from Oklahoma sang. After he finished, the silence lingered for a pregnant second or two … until someone in the back said, “You still suck, Fullbright!”

The resulting laughter — Fullbright’s included — felt like a collective sigh of relief, but the air of genuine respect and awe for both the song and artist was undeniable. No doubt there was a fair amount of jealousy in the mix, too, given that songwriters and musicians are only human. But if you had polled everyone in attendance that night for an honest assessment of Fullbright at the time, then still a year away from the release of his first studio record, From the Ground Up, the verdict would have been unanimous: The Force is strong with that one.

Lynne Margolis didn’t make it to Folk Alliance that year, but she’s seen Fullbright cast that same spell over crowds and fellow songwriters plenty of times herself, estimating that she’s caught him on upwards of 20 or more occasions at venues and festivals all over the country. It’s an experience she likens to “witnessing a bird graduate from flying to soaring,” and you better believe she took keen notes the whole time, because I think her cover story on Fullbright is one of finest artist profiles we’ve ever run in these pages. I’m actually a little jealous I didn’t write it myself — which, given the subject, seems entirely fitting. Listening to any of Fullbright’s three albums — 2009’s Live at the Blue Door, 2012’s From the Ground Up, and especially the new Songs — makes me really relieved I’m not a songwriter. Especially given the fact that the punk’s still years away from 30.

Fullbright was our chosen one for the cover from the get go, but truth be told, I don’t think we’ve ever crammed so many worthy contenders into a single issue. For our Q&A, Holly Gleason catches up with living legend Billy Joe Shaver, and further back you’ll find Holly’s terrific feature on none other than Miranda Lambert — a certified superstar whose latest album, the very-aptly-titled Platinum, debuted at No. 1 on both the country chart and the Billboard Top 200. We’ve also got features on long-time LSM favorites like Bruce Robison and Kelly Willis, Corb Lund, and Micky & the Motorcars, plus profiles on such formidable rising stars as Robyn Ludwick, Nikki Lane, and the Matersons. And back in Reviews, you’ll find enough recommended new and recent releases (including the best Willie Nelson album in a very long time) to soundtrack your life well into, well, September. Which, coincidentally, is right about when we’ll have a brand new issue of LoneStarMusic for you to dig into.

But until then, let’s all savor this one, shall we? Just like I’m still savoring the sweet, sweet rush of watching my San Antonio Spurs win their fifth NBA championship — and clinging to that joy as tight as I can before football season kicks off and my incurable Cowboys Fan Anxiety Syndrome kicks in again …

Oh, sorry, did I drift off topic there a bit? Must be my cue to sign off. Until next time, then … happy reading. And listening.