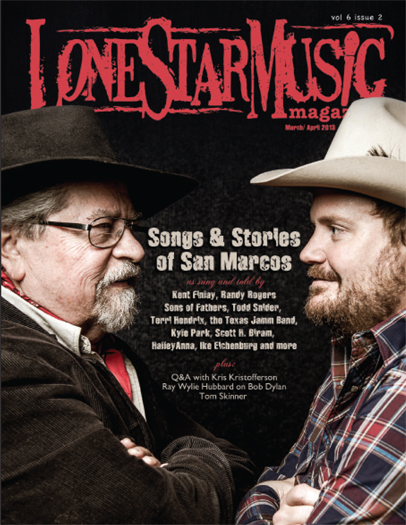 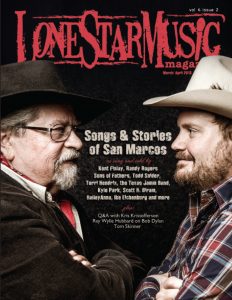 When people think about Texas’ musical hotbeds, it’s usually the bigger cities that spring first to mind. Austin’s invariably at the top of the list, with its “Live Music Capital of the World” claim bolstered by super-sized festivals like South by Southwest (which will be in full swing by the time this issue hits the streets) and the Austin City Limits Music Festival. Houston and the Dallas/Fort Worth Metroplex (not to mention nearby Denton) can also boast rich musical histories and vibrant scenes, as can San Antonio and of course Lubbock. In fact, we devoted almost an entire issue to Lubbock a couple of years ago (with Joe Ely as the cover artist), and I’m sure we’ll get around to doing theme issues on all of the other aforementioned cities, too, somewhere down the line. But first, to mark the occasion of the recent (October 2012) opening of our new store, Superfly’s Lone Star Music Emporium, and the upcoming release of the Randy Rogers Band’s new album, Trouble, we thought it was a perfect time (not to mention high time!) to shine a celebratory spotlight on the oft-overlooked but considerable contributions that the beautiful little college town of San Marcos has made to the Texas music scene.

Randy Rogers wasn’t born in San Marcos, but he did start both his songwriting career and his band here while attending college at Texas State University — via his extra-curricular night classes at Cheatham Street Warehouse under the tutelage of Kent Finlay. And Rogers is just one of many stars of Texas, country, and Americana music who played Finlay’s Cheatham Street very early on — if not right at the beginning of — their road to fame; other notables over the years have included George Strait and the Ace in the Hole Band, Stevie Ray Vaughan, Todd Snider, James McMurtry, and longtime San Marcos resident (and frequent LoneStarMusic columnist) Terri Hendrix. And the roll call of San Marcos greats doesn’t end there — nor is the storied Cheatham Street the only happening venue here in town. This March marks the two-year anniversary of the state-of-the-art Texas Music Theater, where we’ll be holding our fifth-annual Lone Star Music Awards later this spring. And right around the corner from our record store is the one-and-only Triple Crown — one of the best little bars in Texas and likely one of the only ones serving up live music 365 days of the year.

Inside this issue, you’ll find features on many of the above, along with such other San Marcos-sprung acts as Sons of Fathers, Scott H. Biram, Kyle Park, HalleyAnna, and Ike Eichenburg, plus the historic Fire Station Studios and Texas State University’s Center for Texas Music History. When the issue was in its early planning stages, we had actually hoped to include stories on even more San Marcos artists and institutions, but we just flat ran out of room. That just goes to show you how much talent there is in this town. 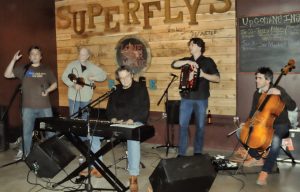 I’ve been a happy resident of San Marcos myself since the late summer of 2007. But Superfly’s Lone Star Music Emporium is still kind of new to these parts. Still, the store’s come a long way in the six months since our opening and we’ve got a lot of cool additions and improvements in the works which should make for a pretty exciting year. Meanwhile, we’ve already hosted a lot of great in-store performances by some of the biggest names on the Lone Star Music scene as well as some terrific up-and-comers. Some of my personal favorites so far in 2013 alone have included San Marcos’ own Hill Country Gentlemen, Dustin Welch, and the legendary Terry Allen — the cover artist for our last issue, who celebrated the release day of his Bottom of the World album with us on Jan. 22. Of course, our in-stores have always featured free ZiegenBock beer samples, but Allen’s was our first to also have libations generously provided by our new San Marcos friends from Cody’s Bistro. If you haven’t made it down here for one of our in-stores yet, be sure to check out the schedule on our store’s website, www.lonestarmusic.com.

We’re pretty proud of our new store, and most of all, proud to be part of the San Marcos landscape and music scene. As I sign off on this issue, I can’t help but think of the chorus of a certain beloved Kent Finlay song, recorded by the Randy Rogers Band and sung by countless other songwriters and patrons at Cheatham Street over the years: “They call it the Hill Country, I call it home.”