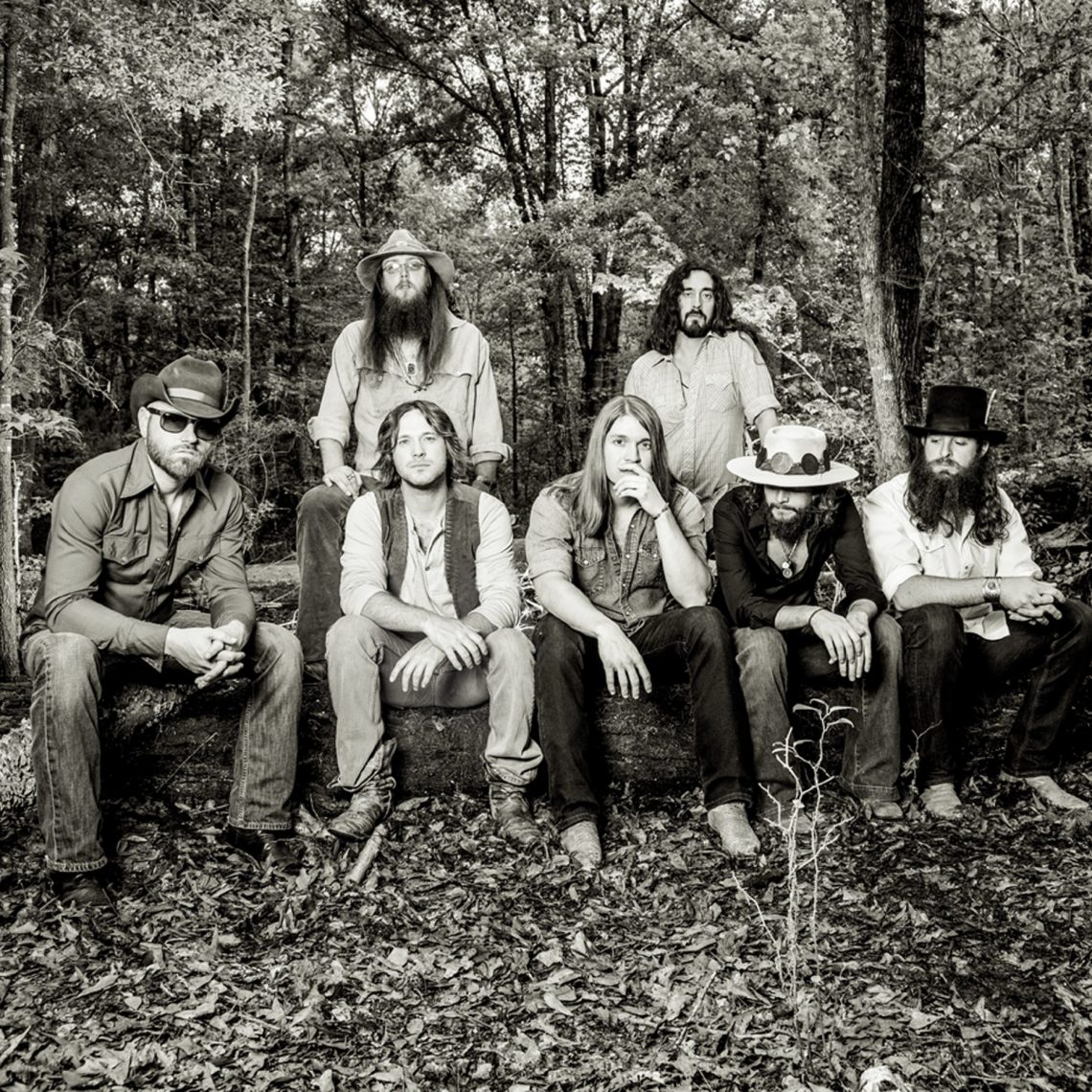 Hailing from the humid, rose-conducive environment of East Texas, Whiskey Myers has been a groove-slinging Southern rock force for several years now. Founded in 2008 by frontman Cody Cannon (vocals, guitar), Cody Tate (guitar), John Jeffers (guitar), Gary Brown (bass), and Jeff Hogg (drums), the band has since grown into a seven-piece, with keyboard player Jonathan Knudson (formerly with the Damn Quails) and percussionist Tony Kent (former drummer for John David Kent) officially added to fold in time for the making of Mud, their fourth album. It’s their second in a row produced by Dave Cobb, arguably the hottest producer in Americana music right now, and picks up right where were 2014’s head-turning Early Morning Shakes left off. With a focus on thick riffs, soulful hooks and, for the most part, images of traditional Dixie living, the high-energy road warriors aren’t reinventing the wheel so much as slapping it with a formidable coat of grain alcohol, soul food and a nice dash of danger. It’s a record made for cranking loud, packed with songs that sound like they were born for stages and arenas even bigger than the ones the band has played over the last couple of years touring both as headliners and supporting such heavyweights as Lynyrd Skynyrd, Chris Stapleton, and even alt-metal bangers Shinedown (which, honestly, really isn’t as much of a stretch as some might think).

In advance of Mud’s Sept. 9 release (and Whiskey Myers’ in-store at Superfly’s Lone Star Music Emporium on Wednesday, Sept. 14 at 2 p.m.), we caught up with bassist Gary Brown for his thoughts on the band’s explosive rise on the Texas music scene and beyond, as well as some insights into the making of the new album, working with Cobb, and how to effectively squeeze seven band members into a recording studio.

There’s no doubt this is a Southern rock record. When writing and recording a new album, how do you guys balance the need to both stay true to the sound and style you’re known for, but also keep things fresh?

That’s the challenge for any artist, I think. We focus on the things we really know. As long as you stick to what you know, then your music will grow with you as you get older, and it’ll feel real and take on different elements over the years.

“Frogman,” which was co-written by Cody Cannon and Rich Robinson of the Black Crowes, is about a Navy SEAL. Do you know how that subject come up?

We’ve become friends with some guys that are former SEALs, and they have these amazing stories about where they’ve been and the things they’ve done. We thought these stories needed to be heard, and the only way we know how to tell a story is by putting them into a song.

Another song on the album (“Trailer We Call Home”) was co-written by Darrell Scott. How did these big-time co-writes come about?

For us, it happens in a number of ways really. Sometimes management sets something up, but usually we just get together with someone we’ve known for a while. Cody has a really good relationship with a lot of great writers in Nashville, like Brent Cobb, that are doing some killer things right now. Having those relationships lets a song happen in a really natural way.

How does having new full-time members effect the dynamic in the studio?

When you have seven guys in the studio at once, there’s a natural instinct to try and make something really pop, but it’s important to know when to pick your spot and just settle into the groove. Everyone looked for the parts that needed to shine for each song. It was nice to have guys that understood what we were all going for in the big picture.

What’s the process like for adding new members to the band?

When we added Jonathan Knudson on keys, it was really clear to all of us that we needed some organ to round out our sound. We knew Jonathan from bands like Damn Quails and Jonathan Tyler and the Northern Lights, which are bands we all like and respect. We invited him out to play a couple of shows with us and it felt really natural, and his personality also fit with us really well. As for Tony [Kent, percussion], we’ve known him for several years, so when he was available to go with us on the Skynyrd tour in Canada, it went so well, we just kept asking him to come back out with us.

Why did “Mud” end up as the title track for this new record?

I think the swampy, dark and mysterious feel of that song is something that’s always been very familiar to us. That feeling really spoke to us in that we all identify with the character of the song, also. That song sums up what the record is about.

This isn’t the first time the band has worked with Dave Cobb, but he’s become a much bigger star in the music world than he was a few years ago. Were there any differences in working with him now compared to in the past?

It really felt like we just picked up where we left off with Early Morning Shakes. We recorded that album quickly and when we got back into the studio with him, we kept that vibe going. But we as a band have grown since the last album, and he’s grown as a producer since then, too, so his techniques on how to get a particular sound has matured a bit, which helped this record come out so well.

You spent a good chunk of the summer touring with hard rockers Shinedown. That’s a pretty unusual bill. How did the crowds take to you?

The audiences really dug it. We had fans at every show, and you could see that people who had never heard of us would warm up to us as the set went on. I think the whole thing went really well.

You guys have been on quite the journey over the past decade. Has there been any sort of “a-ha” moment where you were amazed at how big things have become for you?

Oh yeah. That Skynyrd tour was definitely one of those things. When you go on a big tour like that, you realize that there’s a limited amount of musicians that get to play in arenas and stadiums every night. When you get to do that more and more, it’s impossible to not look back and admit to yourself, “Yeah, man, we have come a long way.”