Round 4: LSM’s Progressive Country/Honky-Tonk Heroes Showdown Willie and Ely make it into the Elite 8 with two albums each, but Waylon, Shaver, Townes and Guy are still in the hunt 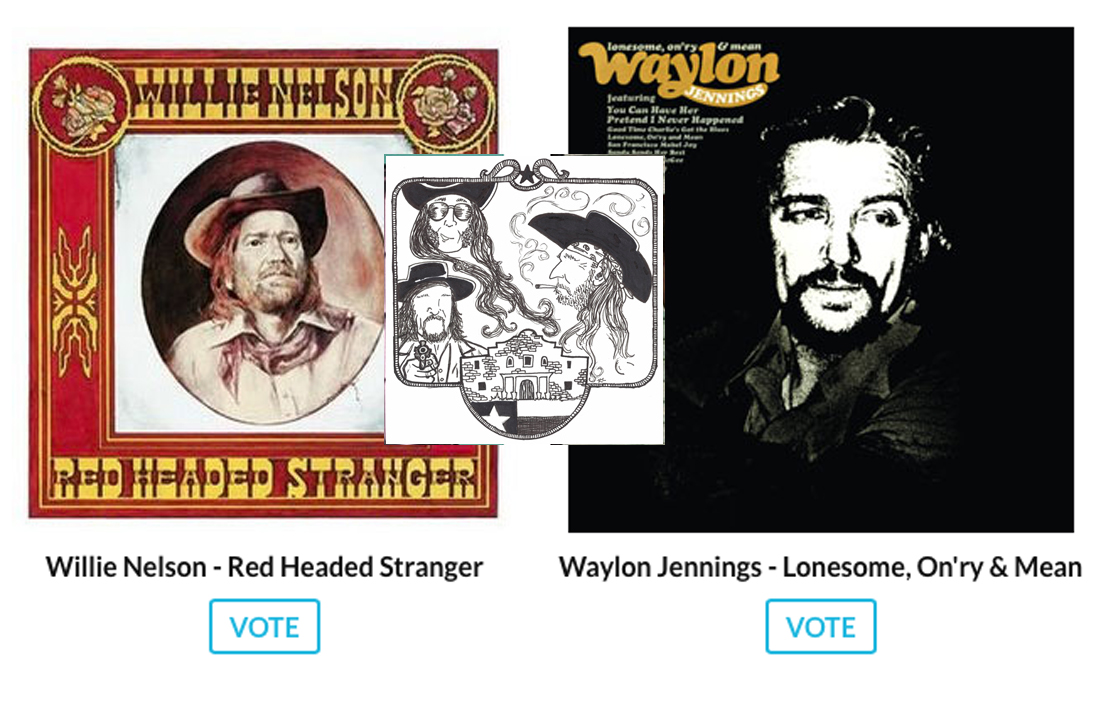 When we kicked off this poll a couple weeks back with 64 classic albums from the ’70s heyday of Texas progressive country music, there were admittedly a handful of records we figured were a safe bet to make this far into the tournament — and even a couple of artists with a pretty good shot of entering Round 4 with more than one album still in the game. Willie Nelson being one of those was a no-brainer, of course — even after Shotgun Willie made a shockingly early exit in the first round — and the odds favored both Waylon Jennings and Townes Van Zandt as well.

Well, thankfully, we didn’t put any actual money down on those. Because although Willie’s still going strong after Round 3 with Red Headed Stranger and Phases and Stages advancing (thanks to wins over the Flatlanders and Willis Alan Ramsey, respectively) , Ol’ Waylon and Townes are now down to one album each. Waylon’s Honky Tonk Heroes put up a good fight but fell to Billy Joe Shaver’s Old Five and Dimers Like Me (an especially interesting match-up warranting an essay we’ll be posting later this week), and Van Zandt’s career-defining Live at the Old Quarter — undeniably the man’s greatest record by more miles and miles of Texas than there are between El Paso and Galveston — was actually beaten rather soundly (59 to 40%) by Joe Ely’s Honky Tonk Masquerade. In fact, don’t call Joe the Crazy Lemon — call him the Upset Kid, because he also vanquished Jerry Jeff Walker’s landmark ¡Viva Terlingua! with his self-titled 1977 debut.

Now, just for the record, we couldn’t be happier to see Old Joe holding his own so well in this bracket; we just figured (not a little sadly) that he was a goner when we saw the giants he was up against in that last round. So mad respect to Ely and that whole unbeatable original Joe Ely Band for tearing a Lubbock-sized hole through the status quo and keeping things interesting. And although Honky Tonk Heroes and Live at the Old Quarter may have fallen last round, Waylon and Townes are still standing — with Jennings’ Lonesome, On’ry and Mean having edged out Sir Doug and the Texas Tornados’ Texas Rock for Country Rollers and Van Zandt’s Flyin’ Shoes leaping past Kris Kristofferson’s Kristofferson. And last but not least in our Round 3 match-ups, Guy Clark’s Old No. 1 came out on top of a brutally tough-to-pick-sides-in battle with Terry Allen’s Lubbock (On Everything).

So on we march to Round 4 — aka the “Elite 8.” On the left side of the bracket, we’ve got Willie against Waylon with Red Headed Stranger vs. Lonesome, On’ry & Mean, and Billy Joe vs. Townes with Old Five and Dimers Like Me vs. Flyin’ Shoes. And on the right, it’s Ely vs. Willie with Joe Ely vs. Phases and Stages, and Ely (again!) vs. Guy with Honky Tonk Masquerade vs. Old No. 1. That means that if Ely’s luck holds out, he could actually be battling himself in the semifinals. Alternately, if Joe Ely loses to Phases and Red Headed Stranger beats Waylon on the other side of the bracket, this whole thing could actually come down to Willie vs. Willie in the finals.

But let’s not get ahead of ourselves. Because if we’ve learned anything here up to this point, it’s that there really is no such thing as a sure thing.

Click on the “Vote Now” button on the image below if you’re on a mobile device or on any of the match-ups if you’re on a computer, and pick away. And remember to keep checking back to vote again in each new round (all times CST).