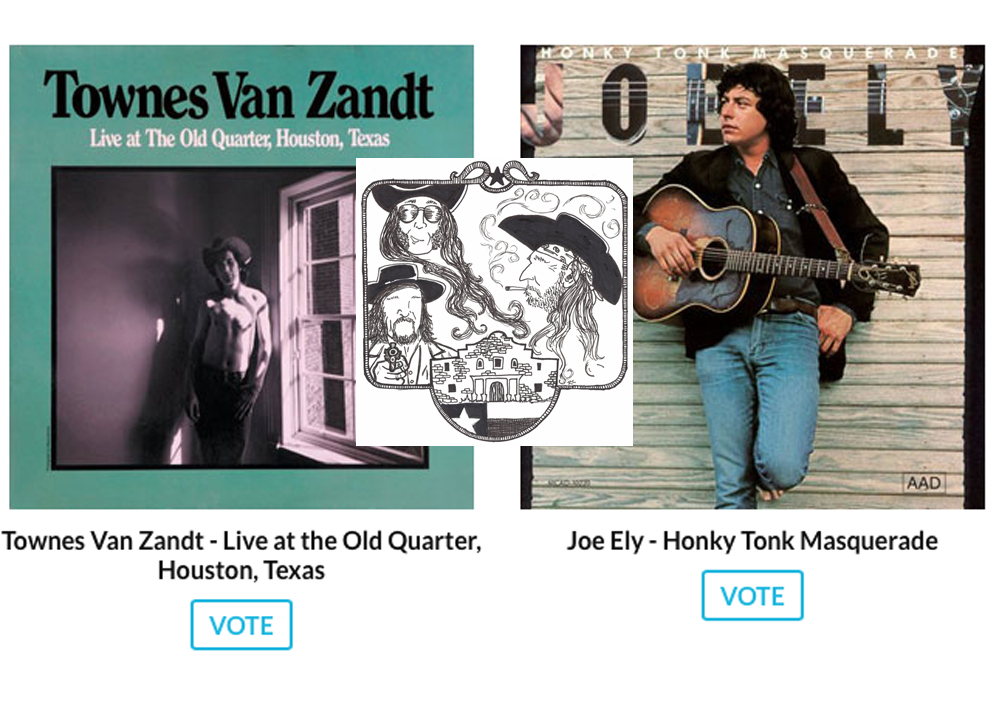 It’s all fun and games until somebody gets hurt. Or until one’s favorite album of all time gets eliminated. Or until it comes down to having to make a choice between two of your other favorite albums of all time. That’s when the good times stop rolling, the bitter tears start flowing, and things get ugly.

In other words, we’re now into Round 3 of Lone Star Music’s “That ’70s Texas Progressive Country/Honky-Tonk Heroes Shotgun Showdown,” with just 16 records left and another 16 equally worthy records left behind. Now, just to be clear, there ain’t an album still in the running here that stands out as an egregious “how did that get this far” gate crasher — but good lord, the ones that got cut down last round … well, it just goes to show how tough the competition here really is. And if one or more or even most of your favorites just got eliminated, take some small comfort in knowing that many of the 16 match-ups were so close, the winner was decided by as few as 10 votes — with Terry Allen’s Juarez and Kris Kristofferson’s The Silver-Tongued Devil and I edged out by Townes Van Zandt’s Flyin’ Shoes and Waylon Jennings’ Lonesome, On’ry & Mean, respectively, by even fewer. We expect the margins across the board to be even tighter going forward. Another takeaway from Round 2? Townes isn’t unbeatable, after all. After emerging from Round 1 unscathed with all five of his initial entries still standing, he’s now down to two, with High, Low & In Between having been bounced by Jerry Jeff Walker’s Viva Terlingua, Delta Momma Blues shown the door by Waylon Jennings’ Honky Tonk Heroes, and The Late Great Townes Van Zandt cut down in its prime by the self-titled debut by the scrappy Joe Ely.

So here’s who’s left in Round 3 … Starting at the top of the left side of the bracket, Willie Nelson’s No. 1 seeded Red Headed Stranger takes on the Flatlanders’ debut, pitting one of the best-selling and most famous albums of the Outlaw country era against a terrific but obscure little record that, according to legend and/or Texas music folklore, was originally issued only on 8-track — like maybe a couple dozen of them. Then there’s Waylon’s Lonesome, On’ry & Mean meeting Sir Doug and the Texas Tornados’ Texas Rock for Country Rollers — aka the last Doug Sahm album standing— and another Jennings’ classic, Honky Tonk Heroes, against Billy Joe Shaver’s Old Five and Dimers Like Me. (We’re calling Shaver the de-facto winner of that match-up ahead of time, if only because he wrote pretty much every song on both albums.) And Townes’ Flyin’ Shoes, having now beaten both Shotgun Willie and Juarez, faces Kristofferson, the first and arguably finest album Kristofferson — aka the original thinking man’s country music maverick — ever made. Meanwhile, over on the right side of the bracket, we’ve got Jerry Jeff’s seminal Viva Terlingua facing the aforementioned Joe Ely, Willie’s Phases and Stages vs. Willis Alan Ramsey, Townes’ career-defining Live at the Old Quarter vs. Ely’s fan-favorite Honky Tonk Masquerade, and Terry Allen’s epic Lubbock (On Everything) vs. Guy Clark’s debut/de facto greatest hits album,  Old No. 1.

And just think … it’s only going to get harder from … well, no. That’s a lie. This round right here is as hard as this poll is gonna get, folks. But let’s all just buck up and get through it together, OK?

Click on the “Vote Now” button on the image below if you’re on a mobile device or on any of the match-ups if you’re on a computer, and pick away. And remember to keep checking back to vote again in each new round (all times CST).