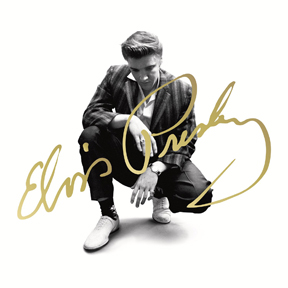 With the general devaluation of music in the digital era, some of the most important music ever made can now be purchased dirt cheap. That’s the case with this voluminous 60-CD box set, which carries a $300 list price but can be purchased for considerably less from various retail outlets.

Like Legacy’s similar Bob Dylan and Johnny Cash packages, The Album Collection gathers virtually all of the albums that Elvis Presley released during his lifetime, in individual cardboard sleeves that reproduce their original cover art. The Elvis package (which arbitrarily omits The Sun Sessions, The Million Dollar Quartet and a couple of more forgettable titles), adds a trio of decade-specific rarities discs and a colorful, smartly annotated hardcover book, all housed in a handsome, sturdy box.

While the Dylan and Cash sets impressed by conveying the depth, breadth and vision of those artists’ catalogues, the Elvis set tells a more troubling, contradiction-laden story, charting the dizzying highs, humiliating lows and lasting impact of an epic career that stands as both an inspirational fable and a cautionary tale.

Although Presley’s earliest LPs are a patchwork of tracks from a variety of sources, they remain definitive documents of his sublime early incandescence, and offer persuasive evidence of his titanic cultural influence. But what really stands out is just how much of The Album Collection is so utterly inessential. Indeed, it’s incredible that an artist of Elvis’ stature and influence spent so much of his career recording disposable dross — the stultifying ’60s soundtrack discs, the tossed-off late studio efforts, the redundant live albums.

Despite the preponderance of subpar material, it’s fun and instructive to trawl The Album Collection for small gems in unexpected places, e.g. a poignant reading of Bob Dylan’s “Tomorrow Is A Long Time” on the Spinout soundtrack, a tough take on Jimmy Reed’s “Big Boss Man” from Clambake, and various rarely-heard covers on the various live discs.

Meanwhile, the familiar classics have lost none of their power to excite and amaze. Such early releases as Elvis Presley, Elvis and Elvis Is Back! still sound fabulous, as do the late-’60s comeback era efforts Elvis (NBC-TV Special) and From Elvis In Memphis, and such underrated ’70s efforts as That’s The Way It Is and Elvis Country (I’m 10,000 Years Old).

In terms of sheer volume, the truly transcendent and enduring music on The Album Collection is outweighed by the inessential stuff. It’s a tribute to Elvis’ talent and charisma that his iconic status has ultimately survived so much inconsequential music, and his gloriously messy story has never been told more compellingly than it is here. — SCOTT SCHINDER