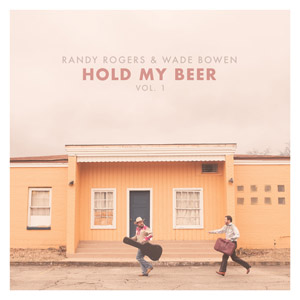 Long established among the top-drawing tier of independent country artists, in Texas or elsewhere, singer-songwriters Randy Rogers and Wade Bowen have made an annual tradition out of giving their bands a break and taking their stripped-down songs and stories on the road for a shared acoustic tour. Here they’ve finally gotten around to reverse-engineering it back into a full-band throwdown worthy of producer/multi-instrumentalist Lloyd Maines; it’s fan service, maybe even a bit self-indulgent, but there’s enough good stuff here to win over even the uninitiated.  The duo’s timing is great: a few years ago, it might have been hard to tell their voices apart, but both men’s voices have matured into distinct instruments. Rogers’ twangy purr and Bowen’s gravelly tenor take turns riding over mostly playful tunes like Joe Ely’s “I Had My Hopes Up High,” Merle Haggard’s “It’s Been a Great Afternoon” and their own amusing “Good Luck With That” (a winning mix of swagger and humility). There’s some fairly specific statements of their purpose as musicians (“In My Next Life,” “I Got Standards”) that have their own ornery charm, but they might not have the staying power of more universal sentiments like “Til It Does,” a low-key highlight that puts Bowen front and center on a simple, timeless country number that downplays his usual heartland-rock influences and goes straight for whiskey-tinged sentiments like “you don’t want the way it is/’til you’re wishing for the way it was.” Rogers and Bowen don’t shy away from tackling their heroes’ legacy directly, dusting off the under-appreciated early ’80s Willie Nelson/Merle Haggard cut “Reasons To Quit” and breathing fresh yet convincingly weary life into lines like “we keep smoking, we keep drinking, having fun and never thinking.” Sounds like a party on paper, but the devil’s in the delivery courtesy of two onetime college bar-band cowboys who’ve really grown into their boots. — MIKE ETHAN MESSICK