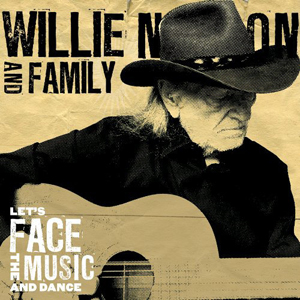 Willie Nelson tosses off perfunctory, half-baked albums with such frequency that it’s easy to forget that he’s one of the most significant country songwriters and performers of our age. And although he long ago traded the role of singer-songwriter for the mantle of iconic entertainer, he’s still capable of coming up with the occasional gem when he’s feeling inspired. Fortunately, Let’s Face the Music and Dance is one of those. More or less a pop-standards collection in the spirit of his 1978 classic, Stardust — a formula that he’s explored, with varying success, several times in the years since — the new disc emphasizes ’30s and ’40s pop standards, augmented with such outliers as the Carl Perkins rockabilly workout “Matchbox,” Spade Cooley’s Western swing chestnut “Shame On You,” the Django Reinhardt instrumental “Nuages,” and the ’80s-vintage Nelson composition “Is the Better Part Over.“

With spare, intuitive backing from his longtime road band, Let’s Face the Music and Dance is also a consistently compelling showcase for Nelson’s slightly frayed yet still formidable vocal gifts. Although he’s been guilty on some recent projects of flailing distractedly through performances, he sounds thoroughly engaged here, embracing the songs’ emotional nuances and deftly navigating their melodic challenges. And the intimate, laid-back living-room vibe is well-suited to both the material and to the effortless warmth that Nelson’s voice conveys. All in all, Let’s Face the Music is not only worthy of top-shelf placement next to Nelson’s other genuine keepers, it serves as a welcome reminder that, in the year he hits the big 8-0, Willie is still worth paying attention to. — SCOTT SCHINDER

Next post Songs & Stories of San Marcos: Sons of Fathers