Venue Spotlight: The Back Porch Bar 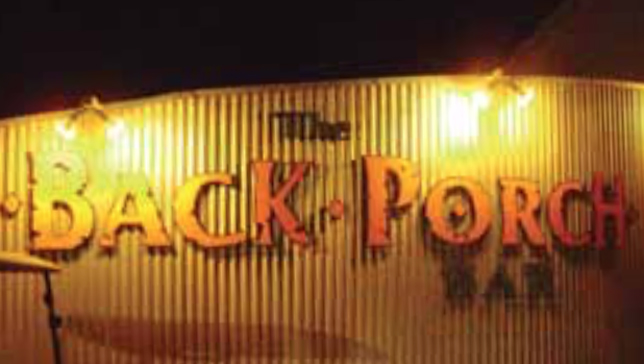 As the sun sets over the harbor, lights from marina bars and restaurants begin to dance on the water. Fishing boats, tied up for the night, rock side to side as the moon ascends over the pier. Sunburned vacationers and locals alike make their way from the beaches and motels to this corner of the island seeking respite from the heat. It’s summertime in Port Aransas, Texas, and at the Back Porch Bar, Susan Powell is hurriedly getting last-minute preparations taken care of while the band is setting up.

Strings of colored lights along the perimeter of the waterfront nightclub light up neighboring palm trees along the boardwalk. The faint sounds of familiar cover songs travel on the breeze from nearby establishments. But there won’t be any of that heard here, because the Back Porch isn’t your ordinary coastal bar. Here, original music rules … original Texas music. Powell, co-owner and manager, believes that original music has a place here in Port A. And she should know. She’s been promoting live music here on the island for more than two decades. 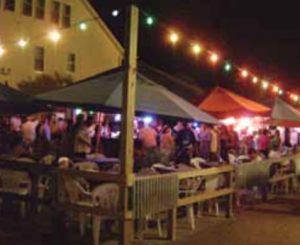 “There was a time when live music wasn’t profitable,” she says. “We used to trade fishing trips and a place to stay for live music.” One of folks who forged the way for original music here was Larry Joe Taylor. Taylor, purveyor of his own brand of “Coastal and Western,” began playing clubs on the island in the late ’80s. “Before Larry Joe, it was mostly blues,” Powell recalls. It was during this time that radio stations out of Victoria and Corpus Christi began switching their formats to Texas music as its popularity grew across the state. Shortly thereafter, developer Jim Urban took an interest and, along with Taylor, built the Third Coast Theater, a small intimate music venue which also serves as a recording studio. In those days, Powell managed an establishment called Tortuga Flats and, in the late ’90s, another called Ballyhoo.

In 2001, along with Glenn Martin, former mayor of Port Aransas, Powell opened the Back Porch Bar. Since then, the club has hosted acts such as Gary P. Nunn, Billy Joe Shaver, Augie Meyers, Max Stalling, Wayne Hancock, Two Tons of Steel, Rusty Wier, Mingo Fishtrap, Sisters Morales and the Dust Devils. Patrons of the Back Porch arrive on foot, by car, and by boat. The bar boasts an all-girl staff and a grill for cooking up the day’s catch or whatever one might show up with. It’s the kind of place that’s nice to discover in this tourist town; an escape from DJ dance music, cover bands and mobs of rowdy vacationers.

But the Back Porch is more than just a bar where you can kick back and listen to great music while watching ships come in and out of port. Here, families come for events such as Doggie Days (an annual canine festival), charity events and fishing tournaments. During the off-season, a potluck barbeque is held every Sunday afternoon with food provided by staff and loyal customers. This laid-back, Texas friendly atmosphere must be what Larry Joe Taylor means when he sings about “Island Time.” Their motto: “beach bums to billionaires.”

The open-air bar sits next to Woody’s, the fishing epicenter of Port “A” since 1957, and is open seven days a week. Visit the Back Porch on the web at www.pabackporchbar.com.

Previous post The Trishas: "They Call Us the Trishas"