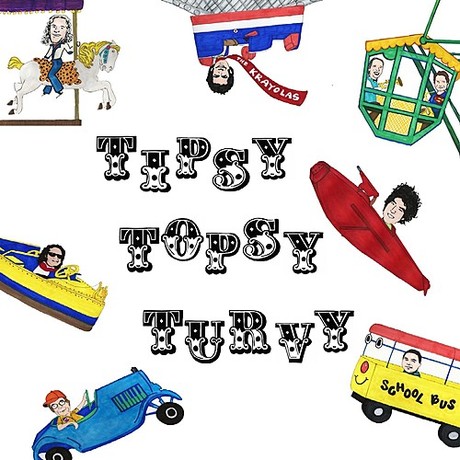 If albums had thesis statements, “I ain’t no Cantinflas, baby, I ain’t no matador/I’m a genuine Mexified San Antonio rock and roll star” would say it all about the Krayolas’ fourth album since reforming in 2008. Hector Saldana and his mates know as much about San Antonio, its special brand of rock ’n’ roll and its history as Doug and Augie. From Saldana’s Peter-Case/Plimsouls hep-cat vocal snarl to Van Baines’ head-tangling guitar solos, Tipsy Topsy Turvy is exactly what one would expect from a band once billed as the Tex-Mex Beatles: a West Side heat-seeking missile. Highlights include bilingual rocker “1070 (I’m Your Dirty Mexican),” which sounds like a Pied Piper call to La Raza; “The Working People,” a brilliant, populist blue-collar soul tune right for our time; and the twanging homage, “Gordon Lightfoot.” And just to double the fun, the band burns through a happy-go-lucky take of Chuck Berry’s Christmas goofer, “Run Run Rudolph,” like they own it. San Antonio rock ’n’ roll is indeed alive and well. — WILLIAM MICHAEL SMITH