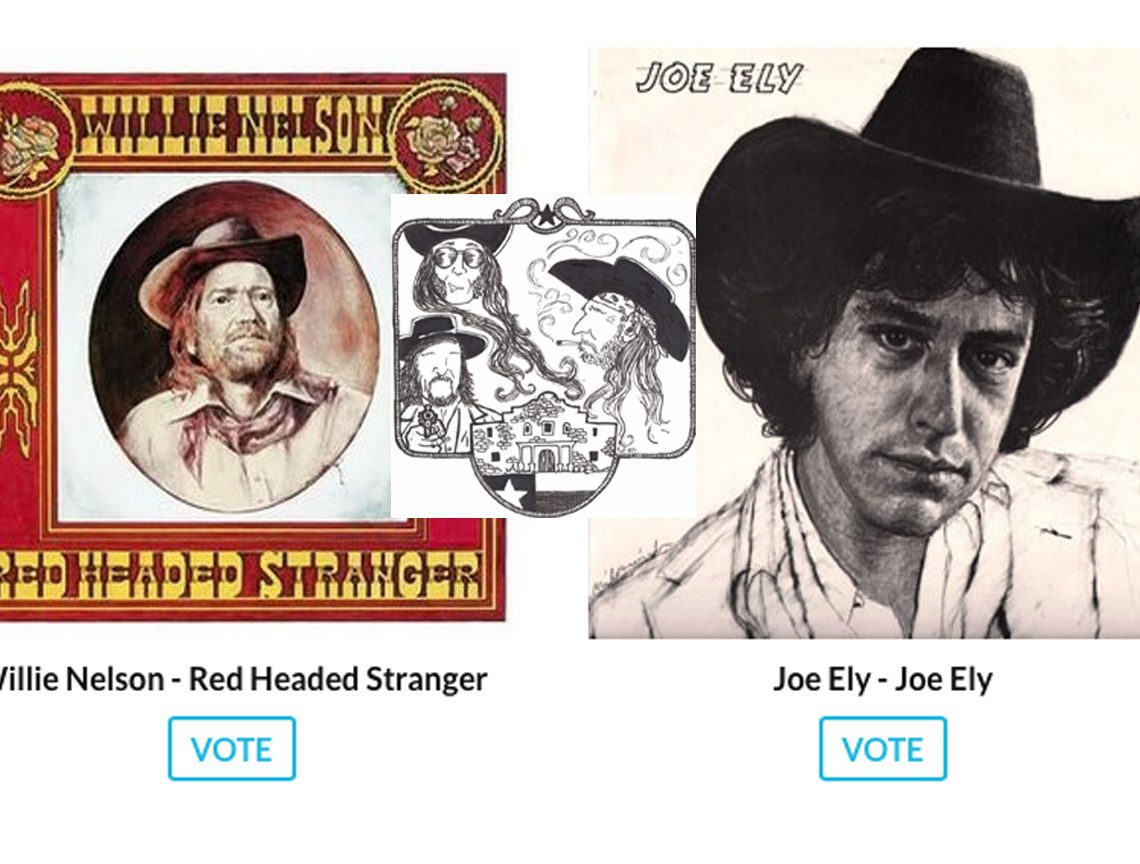 Let’s be honest here … did anyone really want to have to choose between Townes Van Zandt and Guy Clark?

As hard as many of the choices have been throughout this tournament from the start, that one would have been just flat unfair. Doubtless every fan of Texas songwriters has their own personal preference for one over the other, if only by a matter of degrees, but given that this whole endeavor was — in theory, at least — meant to be a contest amongst individual albums rather than artist vs. artist, a final showdown between Van Zandt’s Flyin’ Shoes and Clark’s Old No. 1 for bragging rights as the defining Texas album of the 1970s progressive country era would have felt, well, off. Had things panned out differently, we might have seen an arguably fairer Round 4 match-up between Old No. 1 and Townes’ essential Live at the Old Quarter, but Joe Ely’s Honky Tonk Masquerade knocked the latter out of the race in Round 3. Clark’s album then triumphed over Honky Tonk Masquerade for a berth in the semifinals … only to face Ely again. Counting a Round 3 battle with Terry Allen’s Lubbock (On Everything), that made for three straight match-ups for Old No. 1 against the Hub City’s finest — and that’ll take the wind out of anybody. Final tally: Joe Ely won with 58% of the vote to Old No. 1‘s 42%.

Over on the left side of the bracket, Flyin‘ Shoes had a hell of a ride as well, outlasting four other worthy Townes albums throughout the tournament and making it all the way to the Final Four despite stiff competition from the likes of Willie Nelson’s Shotgun Willie, Terry Allen’s Juarez, Kris Kristofferson’s Kristofferson and Billy Joe Shaver’s Old Five and Dimers Like Me. But it finally met its match when pitted against Willie’s Red Headed Stranger, which beat it in the semis 62.2% to 31.8%.

And so, after five rounds of voting, at long last we’ve come to our final showdown: Red Headed Stranger vs. Joe Ely. And come on — how badass is that? That the most famous of all Willie albums — a No. 1 seed, naturally — would make it to the Finals was pretty much a given, especially after Waylon Jennings’ iconic Honky Tonk Heroes was knocked out in Round 3. But a conservative prediction back at the start would have had Willie ultimately facing Townes (Live at the Old Quarter), Guy (Old No. 1), or Jerry Jeff Walker (¡Viva Terlingua!) Instead, it’s the 1977 self-titled debut from Ely, the record that introduced many not just to Ely himself, but the songwriting of his fellow Flatlanders Butch Hancock and Jimmie Dale Gilmore — not to mention the awesome instrumental fire power of Jesse “Guitar” Taylor and pedal steel maestro Lloyd Maines.

Make no mistake: In terms of household name recognition, Ely is still very much the underdog going into this fight. But weigh these two contenders song by song, album by album, and we couldn’t ask for a better match-up — let alone two records to better represent the ’70s heyday of Texas progressive country. Red Headed Stranger, after all, was the album that proved just how potent Willie’s Way really was. Given complete artistic freedom as part of his then-new deal with Columbia Records, Nelson stitched together a cinematically compelling, full-blown concept album (half of it with old songs he didn’t even write himself), then knocked it out in five days with his own band at a little studio in Garland, Texas. Upon hearing the spare and very un-Nashville-sounding tracks, the suits at his new label assumed Nelson was still demoing ideas, but no sir: That was the album as Willie intended it, and per his contract, that was the album released to the public in the spring of 1975. The result? Not just Willie’s first No. 1 album, but his first No. 1 single (in the Fred Rose-penned “Blue Eyes Cryin’ in the Rain.”) And though it wasn’t the first great progressive country album — let alone even the first great Willie progressive country album, coming hot after both Shotgun Willie and Phases and Stages — it was certainly the one that put the whole “outlaw thing” on the national radar.

A year and change later, a hot tip from another Austin-based maverick, Jerry Jeff Walker, would lead to MCA signing 29-year-old West Texan Ely to his first major-label deal. And thanks in no small part to the trails already blazed by Willie (and Waylon and Jerry Jeff) before him, Ely, too, was afforded the opportunity to record with his own band and songs, be they his own or written by his best friends. The results may not have yielded any mainstream hits of note, but the fact that Joe Ely still holds up as one of the Lubbock legend’s — and all of Texas music’s, for that matter — finest albums end-to-end is undeniable. But can it hold its own against the most famous album of the Outlaw country era?

That’s for you to decide.

Click on the “Vote Now” button on the image below if you’re on a mobile device or on any of the match-ups if you’re on a computer, and pick away. And remember, you can vote once a day, so be sure to check back!