The Band of Heathens: “Top Hat Crown & The Clapmaster’s Son” 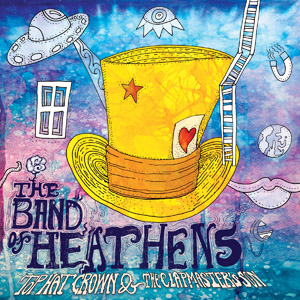 Colin Brooks, Ed Jurdi and Gordy Quist are the kind of scarily talented musicians who can walk into a studio and play just about any instrument in it, plus sing harmonies so tight, you’d think they were siblings. That’s why they clicked so well when they joined forces as the Band of Heathens, and why, aided by the rhythm section of John Chipman on drums and Seth Whitney on bass (and both on vocals), they’ve morphed from a really good group to a great one. Top Hat Crown & the Clapmaster’s Son continues their evolution from a band that sounded like the Band to a band that barely evokes the comparison, except in musical versatility. This time out, guided by producer George Reiff, they jump into easy, Rhodes-piano-fueled funk right off the bat with “Medicine Man” and keep it up with “Enough.” They also seem to be getting even more soulful with age — and more adventurous, as evidenced on “Should Have Known” and the slightly psychedelicized, soul-falsettoed “I Ain’t Running.” The song that captivates most here is “Gravity,” with a fabulous harmony break and some Deodato-like keyboards, but the a cappella vocals on the bluesy “Hurricane” are also damned fine. The mandolin-forward closer, “Gris Gris Satchel,” may be the rootsiest of this eclectic bunch, which contains only one disappointment, the semi-dated-sounding “Free Again.” But that’s a minor complaint on an otherwise very strong release. — LYNNE MARGOLIS

Next post Carrie Rodriguez and Ben Kyle: "We Still Love Our Country"