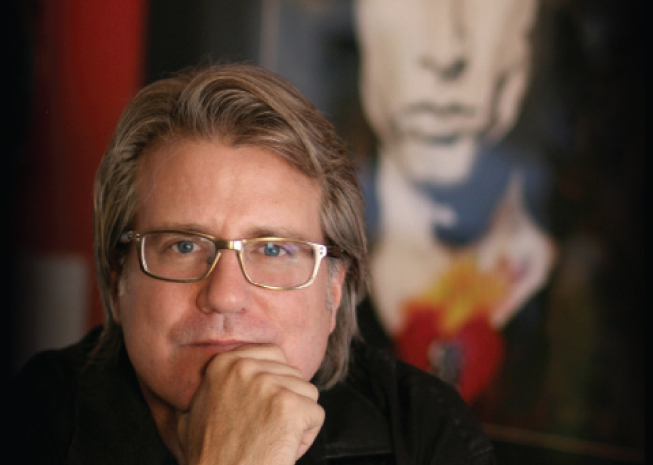 Artists have been paying homage to cultural deities since the first cave-dwellers etched animal images on rock walls. Renaissance painters reveled in Christ; Warhol worshiped trendsetters. South Austin painter Bill Stidham just happens to focus on musicians. And his images of rockers and Texas titans, from Bob Marley and John Lennon to Stevie Ray and Willie, have earned him quite a following. Not to mention a decent living.

The self-taught artist’s original watercolor portraits command four figures. His limited-edition, giclee-on-canvas prints range from $75 for a 12-by-16-inch portrait to $750 for a 48-by-32-inch version. He also sells prints on paper, and offers image-bearing items like coasters and candles. Those renditions help him do a brisk business at festivals including Lollapalooza and Austin City Limits, where he’s a regular featured artist, and on his own website.

But for Stidham, these portraits — character studies that occasionally evoke caricature as well (as in drawing style, not pointed teasing) — are about more than artistic expression and paying the bills. They’re spiritual, too. Every one contains a heart; he calls them his “Sacred Heart” series. 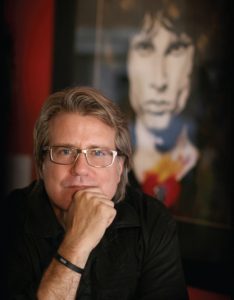 “It really represents the divine component in each and every one of us,” he explains, padding around his painting-filled house in his bare feet. Clearly fascinated by spiritual subjects, Stidham and his wife have filled their home with religious symbolism; representations of the Virgin de Guadalupe and Native American culture cover walls and shelves, sharing space with books about many types of ritual and religion. He mentions attending a lecture by a Mayan shaman, has painted the pope, the Dalai Lama and Sitting Bull, and extols the “mystical qualities” of watercolor painting. In addition to the alchemy of mixing pigments, he says, “Water’s always been a purifier; you submerge in subconscious.”

Stidham, 46, began painting at 35, when he bought himself a kid’s watercolor set to express his unrequited creative desires. By then, he’d spent years trying, and failing, to publish a book. His dream of producing music videos didn’t pan out, either.

“Underlying was this whole thing about healing myself, my own inner self, through painting and watercolors,” he says. “And I could do ‘em fast.”

He developed a wash technique of pouring a pint-glass of water flecked with bits of gold — which he calls “magic dust” — over his images. “After having control for seven hours, at the crucial moment, I give up control and let it become whatever it’s supposed to become,” he explains. “That’s the spiritual component of the paintings.” 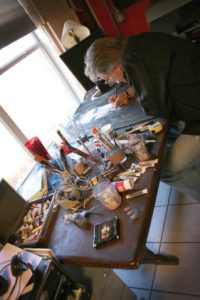 Bill Stidham at work in his South Austin studio. (Photo by Melissa Webb)

But Stidham wasn’t painting musicians back then, or anybody else recognizable. That didn’t happen until six years later, during what he calls his “midlife crash.” By then, he was selling advertising for Austin radio station KGSR-FM.

“None of my hopes, dreams or aspirations had come true in my life,” confesses Stidham, whose graying sideburns don’t tone down his youthful looks. “I was pretty despondent, ready to give up painting altogether.”

That’s when a friend sent him The Tao of Willie. It so happened that the very first concert he’d attended was a Willie Nelson performance at Floore’s Country Store. His father, then president of Lone Star Brewing Co. in San Antonio, took him.

“Willie was like the unifying thread of my family,” Stidham says. “He was one thing we could all agree on.”

He even added a heart, “to represent the heart energy that Willie gave in his life.”

Then he filled the glass, mixed in the gold paint and prepared to pour it on his painting. And something strange happened. “I stood over it and I almost had this out-of-body experience,” he remembers, vividly recalling the sense of floating, of elevation. “It’s only happened twice in my life.”

He was so excited, he took it to the station to show a co-worker, who cried when she saw it. He produced nine more sacred-heart paintings in 30 days — just in time for an already-scheduled one-man show. Its success motivated him to do more. But he says he also realized he had been given a gift, and that there was a bigger message in these works, one he had to define.

It occurred to him that all of his subjects, which also include actors, political and religious leaders and other icons, are “revolutionaries.”

“They all shifted the planet, culturally and musically and philosophically. And I believe they did that through their heart energy. Because that’s where all feeling and emotion, symbolically, comes from.

Even his painting process takes on spiritual overtones; after studying everything he can about a subject, from photos to books and documentaries, he starts with a ritual including candles, incense and music.

“It’s like going to church for me,” Stidham explains, “because really, I’m trying to do something deeper than just painting someone. I’m trying to capture their essence.”

According to guitarist/songwriter Monte Montgomery, Stidham does just that. Montgomery, a fan, recently received a portrait he intends to use for a future album cover.

“The paintings are just so lush and colorful,” Montgomery says. “I just love the look of all his work. I think he’s a really talented individual. And very insightful. I was very moved by the painting, and really, by his connection to the painting. He gets very close to his work, and he tries to instill a lot of spirituality into his work, and it shows.” 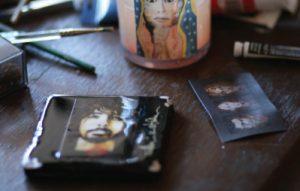 A Bill Stidham “Sacred Heart” portrait of Dave Grohl on a coaster. (Photo by Melissa Webb)

Montgomery spent time with Stidham, talking about his life, and says the artist captured their connection in the painting. “It’s a really cool thing that he does,” Montgomery says. “I love it. I think people need to see what this guy does.”

“Honestly,” says Stidham, “all I’m trying to do with the series is honor people who affect me and affect other people with their God-given gift, their music.”

Next post Slow and steady, but right in time