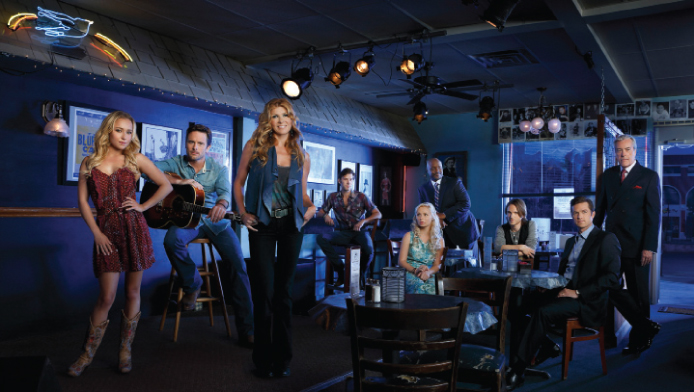 What’s so funny about peace, love and melodrama?

It’d be so easy to dismiss ABC’s prime-time country music drama Nashville as much ado about catty faux-celebrity hi-jinx and costumes. The acting, which borders on histrionic, and the storyline, which is extreme in its extreme, doesn’t offer much in the way of subtlety or nuance. But that doesn’t mean the series — created by Texas native/Thelma & Louise scribe Carolyn Ann Khouri — isn’t hitting home. From the very first episode, which aired Oct. 10, it’s been apparent that beneath the obvious conniving, bed jumping, and other soapy theatrics is an authenticity both comforting and disconcerting. Reality television it’s not, but from the perspective of a Music Row insider and even casual country fan, there’s a devil to its details that triggers more squirm than smirk. 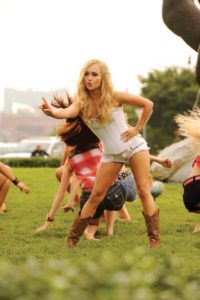 The series’ plot revolves primarily around the clashing careers (and lives) of two fictional country singers, both women. You have an ungrateful (if tortured) brat, Hayden Panettiere’s Juliette Barnes, plying sex over music and usurping Connie Britton’s reigning country queen (and class act) Rayna James in a class/age/culture war where 40 is the new ungrateful dead. Nevermind the game of “who dat” being played around Nashville (is Juliette really Carrie Underwood? Miranda Lambert? Most likely the double-platinum train-wreck Mindy McCready? Could Rayna be a doppelganger for Faith Hill, whose beauty squad they hired? Martina McBride? Sara Evans?) — it’s not the archetypical characters so much as the big-picture stage here that really rings true. While mainstream country music has never been a refuge for greatness, there have always been those acts that have snuck through — and even those cheese wieners who found great songs in spite of their plastic imaging. But those acts are now more endangered than great whales and white tigers. George Strait is repeatedly told by radio he’s too old, and this year’s CMA Awards found him sans nominations — in spite of co-writing with the storied Dean Dillon large chunks of his current album.

The kiddie quake is very real. It is also, as Panettiere’s character suggests, devoid of substance. But unlike the sulking Juliette, who snarls at her manager to “get me” Deacon Claybourne, the failed singer-songwriter/almost artist who’s spent 20 years holding down Rayna’s band, it is unclear whether today’s youthcore has any sort of deeper understanding of what this genre is made of. Yes, they can name-check “Johnny Cash” and “Bruce Springsteen,” but their sonics suggest no understanding or appreciation of what the foundation truly is. Jason Aldean announced five years ago that Kenny Chesney was too old, intimating that Grandpa should get out of the way ’cause he intended to take over the throne. Bullying might be too extreme a word, but the sense of take-what-you-want entitlement fits what seems to be going on on Music Row. In a place where A&R executives brazenly declare “I don’t listen to that crap” when asked what they like, it’s obvious it’s the deaf leading the mute in a game where lust wins hands down.

Grim as that may sound, though, the footage of Music City in the series is almost Chamber of Commerce Porn: It’s so beautiful, lush and green, the 6-1-5 must be the promised land. And beyond capturing local parks, the Cumberland River and iron bridges, there are the true local markers: the 5 Spot, the Ryman, the Bluebird, and the Opry, all shot the way only someone who understands can. But just as importantly, there’s the realistic portrayal of how the business works. Just because she’s got 20 years in, Britton’s Rayna isn’t selling like she used to. The new label head doesn’t give a damn about her loyalty and the promoters are balking at a third of the tickets that should’ve been gone on “on sale” date. Triage for Rayna — whose husband has had a development business fail in a major way, mirroring some of Reba McEntire’s over-extension in the ’90s — means an intimate, back-to-basics tour of small halls. Not that the accountants aren’t continuing to champion the idea of teaming her with white-hot Juliette. But the established star balks at opening for the girl who can’t hit the notes, arguing that such a concession would legitimize the tart and ratify the downward slope of her own career.

Equally stunning in Nashville’s willingness to show the managers and label folks as the uncaring profit churners many are. Early in the season, Juliette’s producer and manager are watching their little vixen writhe and squawk through her “next single.” Leering through the glass at the milk-curdling li’l darling, one exhales, “heartbreaker,” while the other intones “moneymaker,” like its some sort of mantra to the twin gods of lust and lucre. Theirs is a Nashville of churn ’n’ burn, worlds removed from the old-school, music-and-integrity-first aesthetic exemplified by Claybourne and legendary producer/writer Watty White (played by legendary songwriter/producer JD Souther). Juliette, self aware enough to know the difference but ambitious (and naïve) enough to think she can game the system and have it both ways, angles by means sexual and otherwise to lure credible songwriter Claybourne away from her rival Rayna’s band and over to her camp.

Ergo, the conflict. If once upon a time, Nashville — the actual city — had room on the rosters for original country-rooted voices of varying stripes, including Steve Earle, Lyle Lovett, Dwight Yoakam, k.d. lang, Nanci Griffith, the O’Kanes, Mary Chapin Carpenter, Foster & Lloyd, Kelly Willis, Joe Ely and the Mavericks — those days are gone. What we see on Nashville is actually what we get today, at least via mainstream channels.  But given the presence of T Bone Burnett (show creator Khouri’s husband) and Buddy Miller, there is a balance of pretty cool to deeply dreadful. Yes, Barnes actually howls through something called “Boys & Buses,” but the Civil Wars contribute the sultry, slinky “I Should Know Better” — and folks like Del McCoury and writer Gary Nicholson can be seen in the texture of the story. That may not be a big victory, but at least someone’s got a fingernail’s hold on something that does matter. A reminder — as the waitress/accidental songwriter Scarlett O’Connor, Claybourne’s niece, played by the genuinely talented Clare Bowen, represents — that there is always talent if someone will recognize and nurture rather than just feed to the machine.

Of course, the real disconnect is the fact that the story centers on women. Right now, the business is in roughneck boys. It’s a sausage fest in the 6-1-5! Unthinking, weenie-swinging, beer-drinking, name-brand-checking dudes who just wanna make a bulked-up, arena-rock country that’s missing introspection, the same way Nashville has a lot of veneer acting. At least Powers Booth — in the mix as Rayna’s rich and corrupt business leader Daddy — comes off as villainous and driven by the same sort of demons that made his Jim Jones truly hellish. His character’s not quite J.R. Ewing caliber, but it’s close enough to speak volumes about private interests driving politics in this country.

What does it all add up to? As a Wednesday at 9 p.m. dirty/guilty pleasure, Nashville is exquisite. As a morality play about the state of today’s country music business, it’s more accurate than you’d think. But as an enduring bit of quality theatre, as good as Britton, Souther, Eston and Booth are, perhaps not.  Still, nothing could be as egregiously scene-chewing and Valley of the Dolls-ish as Country Strong, so on that note: another bullet dodged. Funny when the scale drops like that, what impactful work can be.