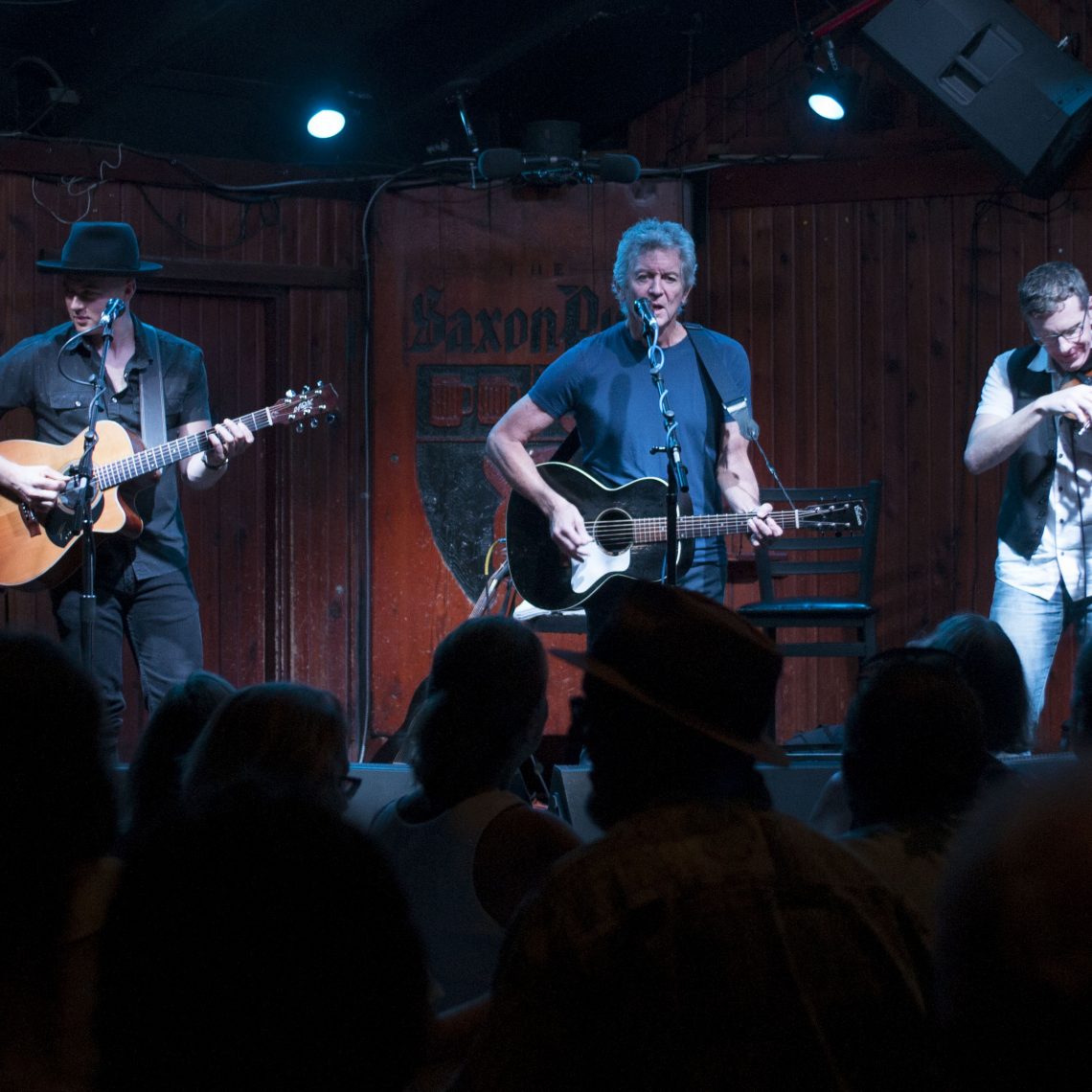 Rodney Crowell at the Saxon Pub. (Photo by Nichole Wagner)

Over the course of his two-and-a-half-hour, 25-song set last Thursday night in Austin, Rodney Crowell dipped just four times into his pre-1990 catalog — and didn’t even get to the first, 1988’s “After All This Time,” until eight numbers in. He later played two more back-to-back chart-toppers from that year’s smash Diamonds & Dirt album, and finished off the pre-encore part of the evening with “Leaving Louisiana in the Broad Daylight” from his 1978 debut, Ain’t Living Long Like This. Other than that, though, apart from his 1994 Guy Clark co-write “Stuff That Works” and a couple of choice covers, the 66-year-old “Houston Kid” kept the spotlight tightly focused on his post-50 songbook. As much as his latest album, this year’s Close Ties, felt inspired by a long, hard look at his past, Crowell’s performance at the Saxon Pub — night two of a two-night stand — left no doubt as to which era of his career is closest to his heart here in the present.

Mind, that era in question now spans over 16 years, a fair deal longer than a lot of the artists Crowell runs with in the contemporary Americana world have even been making music. Australian Joe Robinson, the baby-faced virtuoso acoustic guitarist who accompanied Crowell alongside fiddle/mandolin player Eamon McLoughlin, would have only been a mere 10-years-old back when Crowell launched his artistic comeback in earnest with 2001’s The Houston Kid. But it’s a true testament to how inspired, committed, and breathlessly prolific Crowell’s been ever since then that songs like the opening “Glasgow Girl” and “Dancin’ Circles Around the Sun (Epictetus Speaks)” (from  2005’s The Outsider) and “Earthbound” and “Still Learning How to Fly” (from 2003’s Fate’s Right Hand) still sounded every bit as fresh from the oven as the evening’s five selections from the new album and the three pulled from 2014’s Tarpaper Sky. And although I don’t know what all he played the night before, I suspect he could have easily picked just as many different selections from the same albums and barely scratched the surface. Hell, The Houston Kid still looms large as one of the finest start-to-finish Americana albums of the last 20 years, and he didn’t even get to that one until nearly the very end of the main set.

Crowell’s Houston Kid picks on this night were the aching “I Wish It Would Rain” and its equally emotionally wrecking brotherly companion, “Wandering Boy.” Both ballads were as poignant as ever, with Robinson’s fluid and lovely extended coda on the latter proving the instrumental high point of the night. That said, coming right after the country dancehall surge of Diamonds & Dirt‘s “She’s Crazy for Leaving” and “I Couldn’t Leave You If I Tried,” it mighta been nice to have heard Crowell and his two companions maintain that energy via, say, “Telephone Road” or even “I Walk the Line (revisited)” — if only to help build up a little more steam and momentum going into what felt like a somewhat atypically subdued “Leaving Louisiana.” But the acoustic trio format (not to mention the Saxon’s intimate size, at least for an artist like Crowell more commonly booked in theaters with a full band behind him) made it clear from the get-go that this would very much be a “listening room” type show, which for the most part suited Crowell’s selections — especially those from the new album — just fine. Which is not to say that the occasional bursts of uptempo urgency weren’t welcome. Even stripped down, the exhilarating “Earthbound” was, as ever, anything but earthbound, and the hot-and-bothered frenzy of Tarpaper Sky‘s “Frankie Please” segued nicely into the desperate, insistent groove of “Come Back Baby,” a 1940 Walter Davis blues tune that Crowell has yet to put out on an album of his own. He then rode that groove all the way through the restless “East Houston Blues,” which opened the five-song Close Ties run in the middle of the set. The centerpiece, though, just as on the album, was the exquisitely eloquent “It Ain’t Over.” John Paul White and Crowell’s ex-wife Rosanne Cash weren’t on-hand to sing their parts, but Crowell and McLoughlin managed just fine on their own (with background and harmony assistance from Robinson). 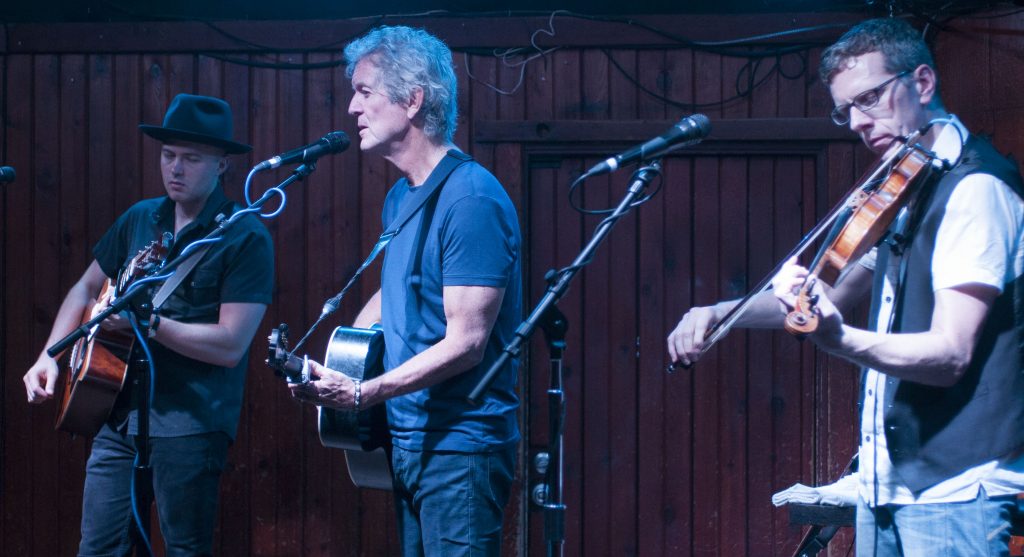 The show itself was still a long way from over at that point, but even after another 10 songs, Crowell had yet to play many of his greatest — or at least most widely known — hits. But when he kicked off the encore saying he was taking requests, he looked flat-out surprised when one woman shouted out for the title track to his 2008 album Sex & Gasoline. He admitted not being entirely sure he remembered all the words to that one, which could have easily been his excuse to instead honor the more customary requests for “Ashes By Now,” “Ain’t Living Long Like This,” and of course “Till I Gain Control Again.” But seemingly genuinely intrigued by the challenge — and having no doubt already correctly discerned that this was a crowd comprised mostly of diehard fans of his entire oeuvre, rather than just the famous Emmylou and Waylon covers and the handful of country radio hits from his mullet and jeans-tucked-into-boots years — he gamely gave it a go anyways. At one point he did have to stop to let another fan up front feed him a line he got stuck on, but he clearly had no trouble reconnecting with the song’s seething, almost sinister vibe and scathingly satirical commentary on society’s Hollywood-obsessed beauty standards on a visceral level. It comes, he explained, from being the father of four beautiful young daughters. “If I’ve heard it once, I’ve heard it a thousand times: ‘I’m fat!’ And I’m tired of it — I don’t want to hear it anymore!”

After that, any plan he might have had to finish with the same-old-same-old was pitched out the window. “I’ve got a theme developing here now,” he said with a sense of purpose, transitioning from self-image issues and celebrity gossip magazines to a riff on 68-year-old men in the entertainment business complaining about having nothing in common (outside of sex) with their 28-year-old girlfriends and trophy wives. That set up Tarpaper‘s bittersweet “Famous Last Words of a Fool in Love,” after which he locked tongue in cheek and gleefully broke out the must irreverent and intentionally ridiculous song of his entire career: “It’s Hard to Kiss the Lips at Night that Chew Your Ass Out All Day Long,” co-written with Vince Gill and featured on 2004’s The Notorious Cherry Bombs, a one-off reunion of Crowell’s early ’80s touring band.

That little bit of self-aware dumb fun went over like gangbusters, but Crowell wasn’t about to say goodnight on a novelty note. In lieu of another song of his own, though, he sent folks home with a reverent nod to Townes Van Zandt. Doubtless Crowell could have easily gotten away with a deeper TVZ cut than “Pancho & Lefty,” but nothing about his pick felt lazy or like he was playing things safe. It just felt, and sounded, right. And singing it along with him at the Saxon Pub in a bar full of Austin fans that knew every word by heart? Well, that felt and sounded pretty damn good, too.

Setlist
“Glasgow Girl”
“Earthbound”
“Stuff That Works”
“Still Learning How to Fly”
“Frankie Please”
“Come Back, Baby” (Walter Davis cover)
“God I’m Missing You”
“After All This Time”
“East Houston Blues”
“Reckless”
“It’s Not Over”
“Forgive Me Annabelle”
“Nashville 1972”
“Dancin’ Circles Around the Sun (Epictetus Speaks)”
“Oh Miss Claudia”
“The Flyboy & The Kid”
“She’s Crazy for Leaving”
“I Couldn’t Leave You If I Tried”
“I Wish It Would Rain”
“Wandering Boy”
“Leaving Louisiana in the Broad Daylight”