Rod Picott: “Hang Your Hopes on a Crooked Nail” 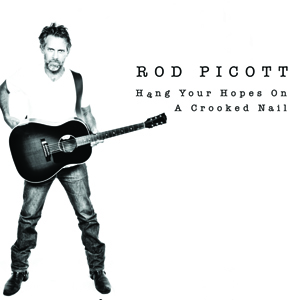 On his latest release, Hang Your Hopes On a Crooked Nail, Nashville-based singer-songwriter Rod Picott celebrates the nobility of those common women and men who make do through lives and loves that bend, but don’t break, the human spirit. The characters that populate the album’s 11 songs are everyday people who may not have much going their way, but what they do possess is the courage to simply hang in there while life keeps throwing those sharp-breaking curveballs their way. These are world-weary and street-smart songs about and for those of us whose lives and loves are anything but perfect. “You’re Not Missing Anything,” a love letter to a long-gone lover, finds the protagonist poignantly telling the departed paramour “you’re not missing anything, baby, now, just the laughing and the crying … just the living and the dying.” Picott concludes the chorus of “Memory” with the mantra of many lovelorn, gotta-move-on men and women who tell themselves they’ll “just let it be a memory” and keep doing so “until there’s someone else the shape of you.” Picott has a keen eye for the commonplace things that real people do and think. “Mobile Home” tells the sad story of the couple whose dream home is full of irony because “ain’t it strange it’s called a mobile home/you just sit there, you ain’t goin’ anywhere.” He notes how “you can’t hang a picture cuz the wall’s not wood,” and that when the relationship goes south, the stationary abode is sold to another pair of optimistic young buyers who “put their good pants on’ when they complete the deal.” The proud owner of the “’65 Falcon” is happy to drive an old rust bucket with a “busted windshield, bald tires and a broken door” that runs on fumes and romance, because it’s all he needs to get to his girl — who loves the static on the A.M. radio as much as he does and “sings along just a little out of tune.” All those little slices of imperfection add up to a tasty treat of a pie about humble lives and why they’re extraordinary. Produced by R.S. Field, who keeps the focus on the lyrical wisdom Picott dispenses, Hang Your Hopes On a Crooked Nail is a beautiful musical instruction manual for living with dignity and reliance. — D.C. BLOOM

Next post Matt the Electrician: "It's a Beacon, It's a Bell"