Rock the Goat: My friend Rod — the patron saint of Folk Music 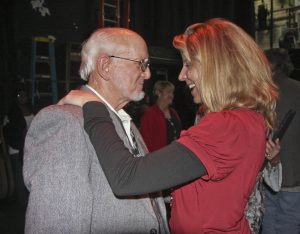 Rumor had it that Rod Kennedy, founder and patriarch of the Kerrville Folk Festival, was going to be in the audience that night. I fidgeted backstage; pulled at the bib of my overalls and nervously second-guessed my set list. “Too many slow songs? Would funny songs be okay?”

It was 1997 and I’d been invited to come play a short set at Paul Barker’s house concert in Austin, Texas. Problem was, I didn’t feel prepared to play music for a listening audience, much less have a semi-audition for the promoter of one of the most prestigious festivals in the country. During my weekly gigs on the Riverwalk in downtown San Antonio, I was used to having my music ignored by customers with their backs to me, heads leaned into straws, sucking down drinks in clear plastic cups with salt-lined rims. While margarita machines hummed in the background, I’d sneak in an original or two between covers of Van Morrison or Fleetwood Mac; but as for people actually listening to what I had to say? I wasn’t used to that at all.

I looked at my watch; it was time. A full-blown case of stage fright set my knees to knocking as I walked to the chair placed dead center in front of the audience sitting in fold-out chairs in the living room. I was greeted by silence. Absolute silence. With shaking hands and quivering voice, I launched into “Two Dollar Shoes,” tapping my right foot on the hard word floor as I played. Trouble is, when I tap my foot, it’s usually in time to a totally different song than the one I’m playing — but it was the only thing I knew to do to keep my leg from quivering. When I finally had the courage to open my eyes, I saw a grey-haired man with a receding hairline in a recliner. His arms were crossed, eyebrows cinched, and his lips were pursed in a pinched-off scowl. Given his posture, it was perfectly clear that he did not like my music. I might have had a touch of the jitters, but I was still Riverwalk-tough enough to shoot him a smile through bared teeth. He glared back at me.

My set drew to its close with polite applause. As the audience murmured about after the show, a woman led me by the elbow to meet Rod Kennedy. My heart sank when I realized he was the grouch in the recliner. Little did either one of us know that within 24 hours of him stiffly shaking my hand, Rod would almost die from a heart attack — one that had actually started while I was playing. Thus the horrible looks he was shooting my way during my show.

The next time I saw Rod, he’d recovered from his health scare and was introducing me at the Kerrville Folk Festival. At the end of my set, he hugged me and reminded me with a laugh, “The first time I heard you, I had a heart attack!” I had to laugh, too, because an unlikely friendship had blossomed ever since our less-than-ideal introduction. And just like it had for so many others before me, the festival Rod founded really did help launch my career as a songwriter. I sold my P.A., quit my Riverwalk gigs, and set out in earnest to find my way travelling the national and international folk circuit.

When my career was knocked off the rails due to medical issues in 2003, Rod started calling to check in on me and never stopped. It felt good to be acknowledged by him. Hugged by him. Seen by him. It was a lifeline of encouragement — for both of us. He was inspired that I didn’t quit performing, and I was inspired by his stick-to-itiveness with the singer- songwriter. I admired and appreciated how, even in an era when cell phones became third appendages and audience attention spans sometimes seemed to dwindle to that of lab rats, Rod continued to endorse music that made you stop, listen, think, and feel. He took pride in knowing that he was an integral centrifuge in folk music history. His awareness of his legacy remained even as time quietly took away his health, car keys, home, and eventually his independence. He made sure that those who stepped in to fill his shoes at Quiet Valley Ranch would continue to “welcome home” not only the singer-songwriters he always believed in but the audiences who truly shared with him that same love of music.

The last time I saw Rod was when I stopped by his nursing home to put on a little concert. He wasn’t feeling well enough to visit. And now, he’s gone. I’m waiting for his phone call. And it’s not going to come. I’m at odds about his death. I know his body had given out on him and that he was in great pain. But I can’t help but selfishly wish he could have witnessed one more festival, because my fondest memories of Kerrville will always be of getting to watch him bask in his dream. I’d like to sit on the other side of the stage and watch him soak in the show. I’d like to watch this ex-Marine lean on his cane, peer over the rail from his VIP seat, and take in the nuances of each performance with that intelligent sideways grin on his face.

Dear patron saint of the folk singer, ambassador to the songwriter, friend — as the embers from the campfires at this year’s festival crackle with songs, you will be missed. Goodbye, Rod.