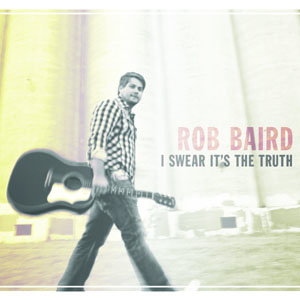 Rob Baird’s I Swear It’s the Truth is the wise-beyond-his-years album that some folks were making the still-fresh-faced Baird’s first national release, Blue Eyed Angels, out to be. Sure, that last album, written mostly when Baird was 21 years old, was a mature offering — for a writer of that age. But this outing boasts a casual confidence that comes from a guy (now 25, incidentally) that absolutely belongs in any conversation of Texas’ better artists, regardless of age. The rhythmic, B3 Hammond-heavy “Same Damn Thing” is both a shout-out to the people that live on life’s fringes and a tune that would’ve fit perfectly on Charlie Robison’s Life of the Party or Jack Ingram’s Hey You, two albums that directly led to the “Texas country” frenzy we know now. Granted, Baird (who was born and raised in Memphis before finding his way to Texas) isn’t necessarily breaking new topical ground; the well-worn subjects of love and love gone wrong provide the album’s thematic fodder. His mix of hooky country and rootsy rock is also familiar sonic territory — though it’s not all that often that one hears it handled with such finesse. Whereas many young artists fail to apply the proper proportions of ingredients, Baird gets the recipe just about perfect. On I Swear It’s the Truth, songs like “Along the Way,” “More than Willing,” and the closing “40 Days and 40 Nights” offer a pleasing balance, blending laid-back country melodies with up-tempo percussiveness pushing the tunes into an irresistible fist-pumping combination. — KELLY DEARMORE