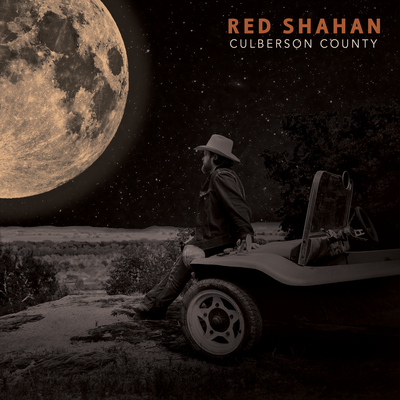 One of the brightest alt-country debuts in recent years, Red Shahan’s 2015 release Men & Coyotes was a greasy, tuneful, literate blast of Americana. It didn’t turn him into an instant headliner but it proved to be a grower, a worthy showcase for an adventurous songwriter who was drawing more attention with each radio spin and increasingly-crowded live show. If you were concerned that independent Texas country-rock might be overtaken by bands going too heavy on the polish and too shallow on the depth, Red Shahan and Men & Coyotes were a welcomely gritty refresh, with barbed guitar riffs and hard-luck tales offsetting his deceptively sweet tenor vocals.

His sophomore effort, Culberson County, proves that the optimism of thousands of newly won fans (not to mention more than a few supportive fellow artists) was justified. The gradual growth doesn’t seem to have resulted in an oversized head — the humility and humor in “Someone Someday” comes from the POV of a man who sees himself as still having a ways to go — but he’s lived up to and exceeded his own first-album standards.

Not unlike his freshman effort, Shahan is mostly unbound by genre; there’s a touch of twang to his vocals, and the gut-level storytelling speaks to his country roots, but he deftly jumps from Fogerty-ish classic rock (the offhandedly funny opener “Waterbill”) to crunching modern rock (“6 Feet”) to something resembling R&B of the slow-burn variety (“Idle Hands”) or a bigger, gospel-tinged feel (the anthemic closer “Try”). All the gear-shifting avoids feeling too scattered or jarring, though, with some smart sequencing and threads of sonic cohesion carefully spun by Shahan and simpatico producer Elijah Ford.

Shahan’s small-scale storytelling remains a strength, but there’s some bigger thematic reaches happening here too. “How They Lie” and “Memphis” look at the psychic damage wrought by greedy land-grabbers and deadbeat dads, respectively, detailed enough to ring personal but resonant enough to grab you by the empathy and never let go. “Revolution” is a pretty rousing slab of guitar rock, high on urgency but low on details; unlike the lefty rock anthems that get misappropriated by seemingly incompatible political campaigns every couple of years, it’s really not specific enough to qualify as misunderstood no matter who’s marching along. But Shahan’s aching plea of “Let’s keep the lonely places, lonely as long as we can/Let’s keep it all out of reach, for anyone who doesn’t understand …” hits a more poignant spot on the title track, serenading the sparsely inhabited loveliness of places like West Texas. There’s probably a metaphor in there, intentional or otherwise, for ambitious songwriters like Shahan who’d hate to be accused of watering down their craft to pander to a wider audience. Hopefully staying the course is Shahan’s plan; his work is lovely enough at its best to draw  a crowd just as it is. — MIKE ETHAN MESSICK