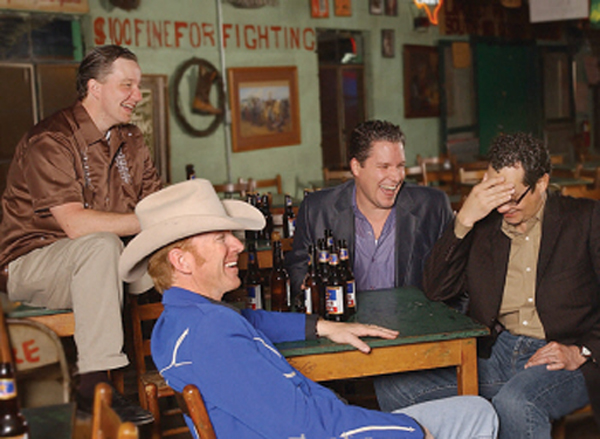 From humble beginnings as basically the only rockabilly band in San Antonio, Two Tons of Steel has become one of the most popular party bands in the Lone Star State. And they’ve also taken the classic rockabilly sound and molded it into something all their own.

Originally a trio of singer and acoustic guitarist Kevin Geil, upright bassist Ric Ramirez and drummer Chris Dodds called the Dead Crickets, they became so popular in their hometown that the San Antonio Current added a “Best Rockabilly Band” to their San Antonio Music Awards for the group. Then they graduated to Gruene Hall, where they’ve been doing their “Two Tons Tuesday” shows all summer for 10 years now, drawing some 12,000 fans over the course of last summer. They’ve also played in Cuba — which inspired the song “Havana Moon” on their new CD — and just returned from their first trip to Europe, where they’re already slated to return not once but twice in 2006.

Along the way the group changed its name to Two Tons of Steel and added electric guitarist Dennis Fallon and veteran steel guitarist Denny Mathis. They can be seen in the IMAX film “Texas: The Big Picture” and the documentary movie King of a One Horse Town. And now signed to the roots music indie label Palo Duro Records, Two Tons of Steel have just released Vegas, produced by Texas legend Lloyd Maines. Lone Star Music recently talked with frontman and main songwriter Kevin Geil about how the band has taken ’50s rock ’n’ roll and brought it into the 21st Century.

Rockabilly is a very strictly defined sound, but Two Tons of Steel do something different with it. What is it that you do to make the music your own?

We started as a three-piece rockabilly band, because I fell in love with the Sun Records sound. A guy can just sit down with a guitar and strum and sing and sound like it, versus the other stuff on the radio where you need 20 pieces to sound like it. We started playing and I started writing stuff, but I never wanted to be classified as a ’50s band. I love that sound, but what we do is new, the way we’re gonna do it. It’s a mature rockabilly sound. And we have Denny Mathis, who is in the Steel Guitar Hall of Fame. He played with Ray Price in his heyday, and Willie Nelson when he used steel guitar, and Bob Wills near the end of his career. He brings so much to the table as far as keeping it in that cool groove. I guess you can call it anything, but countrybilly kind of fits.

You just got back from your first European tour. How did it go for the band over there?

The shows were really well attended. It’s not like here, where if you play a ballad it’s almost like a reason for people to talk, at least at the honky-tonks. Over there, it’s just total quiet.

How did Vegas end up as the title for the new record?

My wife loves Vegas. And she loves to drive. One of the first things when we started dating that she liked to do is just go out and drive. One night I couldn’t sleep, so I got up at 4 in the morning and just kind of messed around and came up with the lyrics to the song “Vegas.” I wanted to call the CD “Unglued” because I like the track “Unglued.” But there was another CD out there that is called something Unglued. So Chris Thomas from Palo Duro did a search, and no one had put out a CD called Vegas. Can you believe it? And it’s a fun song that catches on. First time we play it for audiences, by the second verse they’re singing that “bye bye bye” thing. So it worked out well, and made for good artwork.

You put out your previous records on your own label, and this one is your first for Palo Duro Records. How did you get signed to the label?

I’m not sure how Chris Thomas heard about us. He first contacted me by phone. And they’re based outside of Nashville, so when we went up last year to do the Plaza Party at the Grand Ole Opry, he came out to see us, and said, ‘Hey, I think you guys have a great sound and I’d like to sign you.’ We’re extremely happy that we did it and it seems to be a good move for us.

What’s the origin of the band’s name, Two Tons of Steel?

I love old cars. That goes back to the rockabilly thing. I have this crazy passion for old Cadillacs, so I bought a ‘56 Coupe de Ville. And I had a flat on it once. And these things are huge; it’s like 21 feet long. So I was driving along and I felt the tire going flat, so I pulled into a Firestone place. And I was talking to the guy about whether he can fix it, and I said, “Dude, that car weighs like two tons. I don’t know whether you can even get it off the ground.” So that’s where Two Tons of Steel came from. It started out as the car’s nickname, then I wrote a song about it. The first album we came out with was Two Tons of Steel by the Dead Crickets, our old name.

And weren’t you asked to change the band’s name by The Crickets?

Jim Beal at the San Antonio Express-News had done an interview with Jerry Allison, who was the drummer in Buddy Holly’s Crickets. So Jim said, hey, you might want to call him. It took me weeks to get up the nerve to call him. And he said he was okay with the name as long as we stayed local, because the Crickets were still touring. And we hadn’t even left San Antonio yet. But then Ramiro Burr wrote something about us that ended up on the cover of Billboard. So then I got a call from Jerry Allison’s lawyer saying, hey, we’ve got to end this. So we had to change the name overnight. At the time we had an endorsement with Shiner Bock, and they were using “Two Tons of Steel” in an ad campaign. So we figured, it’s on the radio, everyone’s going to know that, so we changed it to Two Tons of Steel. And now that we have the legendary Denny Mathis on steel, a lot of people think it’s for the steel guitar.

Didn’t your career begin as a very grassroots deal in San Antonio?

We did a regular thing at Tycoon Flats on St. Mary Street. And then we would go up the street to the Crazy Horse Saloon, and then we would go across the street to the Time Out. And then we’d go back down to Tycoon Flats. And that was the tour. I’d bring the Cadillac out and park it out front. The clubs were packed. The Dead Crickets were the thing. There was no master plan. There still is no master plan.

You do “I Wanna Be Sedated” by the Ramones on your new album. It’s not your usual sort of rockabilly song. How did you end up doing it?

We used to play at a place called the North Saint Mary Brewing Company, which was another one of our St. Marys Street touring stops. We were there one night, and I’d heard the song on the radio on the way over there. And I didn’t think much but, hey, it’s the Ramones. That stuff’s crazy. I didn’t even know the words. But then at the end of the night, I was tired of playing the same old stuff, and I just started strumming it, and the place went crazy. And it’s become one of the songs we do that people love. Even Ramones fans. They’ll come up, and go, “That’s the Ramones, man. You shouldn’t be messing with the Ramones. But you know what? Damn, that’s the best cover there will ever be.” When we first recorded it, it got dumped on Napster and ended up all over the place.

You also do “Red Hot,” which originally was a Billy Lee Riley song and was later recorded by Robert Gordon and became his signature song. Was it a challenge to record a number that already had two definitive versions?

We figured, what the hell, might as well just jump in, sink or swim. We originally recorded it for an acoustic album that Palo Duro put out. And the track was just so smoking, we were like, man, we want to put it on Vegas. That song just moves, man.

“Secret Agent Man” is another song here that’s been done many times before. Was it daunting to record such a classic?

Lloyd is the one who talked us into recording that. We played it live. And he was like, “You know, y’all do a pretty good job of that. Y’all might want to put it down.” It’s one of those tracks where it’s undeniable that it sounds right. It doesn’t sound like we’re trying to do anything but just play it the way we would play it. It feels good to me. I just love it. It works. But yeah, it was one of those things where it had to be good. If it’s not good, we’re gonna get castrated.

Is putting out a record on Palo Duro a big step up for your career?

It is. It’s a huge step for us, and that’s what we’re excited about. I always used to joke that Two Tons was the biggest unknown band in the country. So it’s extremely exciting.

And just how far would you like to see your career go?

We’ll go as far as they’ll let us. We cut the leash a long time ago. We run free. We can get off the porch. We can run with the big dogs. We’ll just do our thing and try. And if we get there, that’s great. But it’s more about the journey and all the things we’ve gotten to do. It’s more about that then actually getting to the top of whatever. But we’ll definitely fight our way up there.