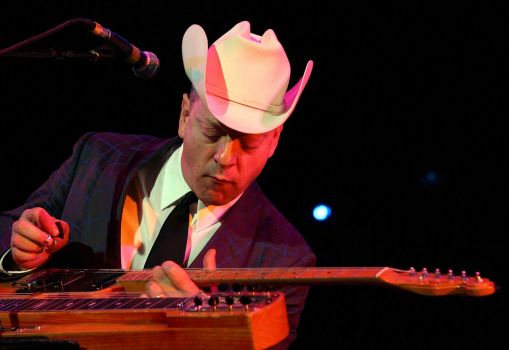 Junior Brown was not born in Texas, doesn’t live in Texas and has never called himself a Texan. But damn straight Texas wants him anyway. By now, six albums into his career, so many people seem to consider Junior a Texas artist that it seems silly nitpicking about how he was born way up north in Indiana, didn’t arrive in Texas until 1973 and left Austin several years ago for Tulsa, Okla.. And who wouldn’t want to claim Junior as their own? The guy sings as fine as the late, great Ernest Tubb, writes a mean, clever song and plays the guitar so well he had to invent the world-famous guit-steel — a guitar/lap steel combo — just so he could keep up with himself. Oh yeah: He also once gave Jimmie Vaughan steel guitar lessons.

Needless to say, Junior has long-since earned his Lone Star Music green card. And yes, he readily allows that he’s “happy to be a part of” the Texas music scene, which presently seems to be enjoying a boom the likes of which haven’t been seen since the heyday of the outlaw movement back in the ’70s. But when it comes right down to it, Junior says he’s “more of a universal guy.” “I’ve been so many places,” he explains, “that I don’t call myself from anywhere.” The same can be said of his music, which roots itself in traditional honky-tonk country but owes just as much to rock ’n’ roll, Western swing and jazz — all of which figures prominently on the new Mixed Bag, Junior’s most eclectic album to date. With any luck, it could also end up being his biggest, if only a fraction of the thousands of new faces he’s playing to every night as the opening act of the Dave Matthews Band’s current tour are converted. We caught up with Junior at a tour stop in Virginia Beach to find out, among other things, what it’s like running in Dave’s world, what to expect in the new, improved, super-deluxe guit-steel he can’t wait to unveil and why you’ll never hear him play flashy roadhouse blues on it.

First thing I wanna know is, how did you end up on the Dave Matthews tour? Is he a fan?

Yeah. I was playing on Saturday Night Live in the house band and he was the musical guest that night. That’s when we met. And his fiddle player, Boyd Tinsley, sat in with me that night and we played a little bit together. The other night I a chance to sit in with Dave and play for about 15 minutes. We had a big jam session, and we’ll do it again tonight.

So how’s the tour been treating you so far?

It’s been great. We’ve had a lot of fun with the shows — they’re huge! They’re all sold-out shows and they’re all big arenas and amphitheaters. These are probably the biggest ones I’ve ever done.

Do you see any many blank stares out in the audience from all of the hippie kids?

[Laughs] Sure. A lot of them are just coming in when we’re on and they don’t know who we are. Dave comes out every night and introduces us, so that sort of surprises the ones that are there early. By about the middle of the set you see them starting to pay more attention and then by the end of the set you’ve got ’em going. But it takes awhile, because they’re not going to commit to it until they get a full dose.

Your new album, Mixed Bag, seems like it may well be the funnest set you’ve ever released. It’s certainly the most eclectic.

Yeah. It ties together with a unifying style even though it’s got such diverse styles of music. Don’t you think?

Like on “Riverboat’s Shuffle,” that’s New Orleans music. Dixieland jazz is certainly not my forte, but I’ve grown up with this song. I played the trombone part on the steel guitar in a way that hasn’t been done before, I don’t think, believe by anyone I’ve ever heard before. So I was able to add my own little touch to that.

The album opens with a cover of Jerry Reed’s “Guitar Man.” How is it taken you so long to get around to recording that song?

[Laughs] Yeah, that’s one that’s really telling my story, because I lived that. Riding around, trying to make a living with my guitar.

One of my favorites is “Ain’t Gonna Work Today,” which has a very Western swing kind of feel to it.

I added a little bit of Bing Crosby feel in there too, and a little Hank Thompson influence. I’ve worked with Hank before — we did a single together, “Gotta Sell the Chickens.” So you can definitely hear the Hank Thompson on there because it’s been a big part of what I’ve listened to over the years. And of course you can hear Bob Wills in there too, because I’ve worked with Leon McAuliffe, who used to be his steel player.

Who is the most unconventional act you’ve collaborated with so far?

I worked with the Beastie Boys once. I can’t remember what year, but I sang “409” with them on a [Beach Boys tribute] album called Stars and Stripes. It’s hard to remember the dates of these things, but they are all significant. I try and pick the guys I like, too.

So you’re a Beastie Boys fan?

Well, I like that one song, “You gotta fight, for the right, to paaaarty!” [Laughs] One of my guitar students, a little kid, brought me that because he wanted to learn it. I thought that was pretty funny.

A lot of people tend to think of you as a Texas guitarist, which of course stems from the all the years you spent playing in Austin and certain elements of your sound. But for all the different styles you play, Texas roadhouse blues/Stevie Ray Vaughan type guitar doesn’t seem to factor into what you do.

No, because to me it’s just a been-there, done-that kind of deal. That’s what I played when I was 18, and I moved on from that, you know. I love Albert King and of course Jimi Hendrix and everything, and I’ve recorded a couple of blues songs that are sort in that style, but I just didn’t want to fall into the cliché of being another white boy with a Stratocaster. There’s too many of them — there’s millions of them and they all sound the same with nothing to say, just the three chords over and over, fast slow, fast slow, same pattern. It might as well be the same song. I’ll listen to some of the greats that are still around, but not some boy sing about how he grew up on a plantation while he’s sipping his Perrier water. You gotta sing about what you do, not what you wanna imitate. Imitations are fine as long as use them as a springboard to something else to where you can really add your own thing or something, make it a part of you. I don’t mind doing a blues song once in a while, but it’s gonna have me all over it.

Did you ever jam with Stevie Ray Vaughan?

No, but his brother was a guitar student of mine and I play with him a lot. I have no problems with Jimmie or a lot of those cats — it’s just these stereotype Austin blues guys that we’re talking about. I never fit in with that, as you say.

What type of student was Jimmie?

Oh great, very talented. That was back when the Fabulous Thunderbirds were just starting to take off. He loved the Hawaiian steel guitar. I haven’t talked to him in a long time but we did a little bit of touring here a couple of years back where we did some jamming onstage that brought back the old times. I’ve got a picture of me and him as a matter fact playing the steel guitar years and years ago. We were both a lot skinnier. [Laughs]

What kind of a guitar teacher were you? Surely all the students weren’t Jimmie Vaughans. Did you have the patience for that?

No, I just did it to make money. I augmented my income with that for a while because it got pretty thin there in the early ’80s. But I hated sitting around teaching people A and D chords all day long. It drove me nuts. But some of the students were better than others, and there are some I have a lot of pride in. Like I say, Jimmie was a good one. And that’s where I met my wife — she was one of my guitar students.

Your first guit-steel, “Old Yeller,” is on display in the Country Music Hall of Fame. Did you give that to them, or is it just on loan?

It’s a loaner, but bless their hearts, they’ve got it in a really nice, prominent spot there. I’m really flattered that they wanted to put it in there. So I’ll let em keep it for awhile because I’ve got a couple more I’m getting built. I’ve got one with pedals coming out that’ll blow everybody’s mind. That’s gonna be like turning Frankenstein’s monster loose on society, man. It’s wild.

Do you have a name for that one yet?

No. All I know is it’s gonna be a contraption. To be able to stand up and have knee levers and hip levers, moving the pedal board forward and standing up and having the guitar strapped to the pedal steel … It’s getting really, really serious.

It sounds like all you need to add to that is a harmonica and a big bass drum on your back and you’ve got the classic one-man-band rig.

Yeah, it almost feels like that kinda thing. That’s the physical price to pay for getting the pedal steel sound. You see that’s why most guys sit down — well, they all sit down. This has never been done. Nobody’s ever played a pedal steel standing up.

Way back when you first got “Old Yeller” back from the custom design shop, how much time did it take you to get used to it?

I was running right away. I played a gig with it the next night, at the Station Inn in Nashville. You ever heard the story about Lindberg, when he designed the Spirit of St. Louis? There was a fellow that was working on the plane and he said, “We all thought that he was gonna taxi around the field first and get the feel of the plane, test everything out. But he just took off immediately.” Now that’s confidence. That’s exactly what I did with the guit-steel. I put my heart and soul into that, and I just knew it would work.