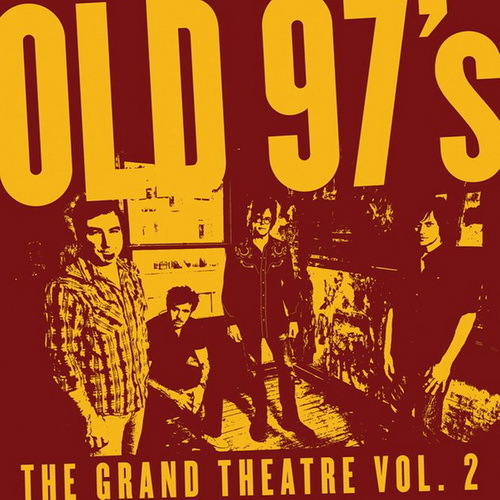 Well, I’m still of the opinion that the whole thing should have been released together as a proper double album in the first place, but that’s a moot point now. Nine months after releasing The Grand Theatre Volume One, the Old 97’s have made good on their promise to chase it with Vol. 2 in a timely manner, and fans are now free to play both volumes back to back, shuffle all 25 tracks together in their own iTunes playlist or maybe even cross their fingers for a truly grand, gatefold double-vinyl edition down the line. But there’s still one nit left to pick: The Grand Theatre Vol. 2 is far too good an Old 97’s record in its own right to be shortchanged with a sequel tag.

Granted, last year’s model was no half-assed effort, either, though the best songs on it were arguably the two spotlight-stealing vocal turns by bassist Murry Hammond (“You Were Born to Be In Battle” and “You Smoke Too Much”), and “Champaign, Illinois,” a quick melodic stroll down Bob Dylan’s epic “Desolation Row” with new lyrics (albeit with Dylan still given a proper co-writing credit.) On Vol. 2, lead singer and songwriter Rhett Miller is very much back on his A-game, effortlessly reeling off some of his best lines at least since his splendid 2002 major-label solo debut, The Instigator, if not going all the way back to such early 97’s gems as “Barrier Reef” and “Murder (Or a Heart Attack).” He hits an early peak here three songs in with the opening lines of “Perfume” (“When you explode into the room/all I can smell is your perfume/and the cigarette jazzing up the atmosphere”), then tops it in quick succession with the crackling good character study of “The Actor” (also a rocking showcase for guitarist Ken Bethea and drummer Philip Peeples) and the crunchy swagger of “No Simple Machine.” The comparatively mellower, reflective “Manhattan (I’m Done)” is another highlight. Meanwhile, Hammond’s first turn at the mic this time around, a sing-along pirate shanty called “White Port,” is an unabashed goof-off, but his second, “How Lovely It Was,” is a beauty on the level of his Volume One songs and his even finer contributions to 2008’s Blame It On Gravity, “This Beautiful Thing” and “Color of a Lonely Heart Is Blue.”

While the songwriting overall is of a higher grade than the offerings on The Grand Theatre Volume One, Vol. 2 adheres to its predecessor’s basic musical template: a hint of British garage rock here and there, but by and large a throwback to the Old 97’s vintage (as in mid-’90s) alt-country roots. The best hooks here aren’t as dizzyingly insistent as the ones double-stuffed into their 2001 power-pop opus Satellite Rides, but they gallop along with the straight-ahead wallop of 95’s Wreck Your Life and 97’s Too Far to Care, and that alone should be more than enough to satisfy the lion’s share of the long-running Dallas band’s fanbase. Whether taken as a whole or in bite-sized halves, The Grand Theatre may not be the boldest artistic statement and leap forward of the Old 97’s career, but all and all, it’s not a bad haul for a couple years’ work. — RICHARD SKANSE

Next post The Roadhouse Rant: Catching up with Kevin Fowler