Okkervil River: “I Am Very Far” 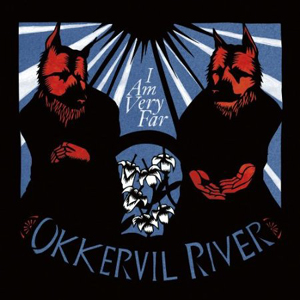 Though the songs beg for interpretation, one hesitates to hazard guesses about what might have been inside Will Sheff’s head when he composed Okkervil River’s first album in three years, I Am Very Far. Like a fever-dream rock opera, Far’s 11 cuts are densely layered, both sonically and lyrically. The result is confusing, convoluted and ultimately brilliant — though that doesn’t seem like quite a strong enough adjective to describe what feels more like an epic poem than an album.

Like Homer’s Iliad and Odyssey, Far is full of the most lovely and disturbing imagery, often juxtaposed like double-exposures. In “Wake and Be Fine,” whose lyrics read as if they were inspired by the book Einstein’s Dream, Sheff even refers to someone speaking his dream to him — from inside it. In the opening song, “The Valley,” a catchy and insistent rocker, rock ‘n’ roll itself becomes like a villain — singeing, hanging, skinning and killing its victims, so to speak. “I hear a breeze that wheezes through the tips of the pines,” Sheff sings, “where there’s laughter and screaming to the rafters in the night. The moon rolls dreaming through the late spring sky, where our friend lies bleeding through his jacket and tie. A slit throat makes a note like a raw winter wind. We were piled in the river with the rock and roll skinned.”

That’s followed by “Piratess,” on which Sheff starts out sounding like David Byrne before morphing into Robert Smith. It’s dramatic and scary, like so much of this album (perhaps he took cues from Texas psych-rock legend Roky Erickson, whom Okkervil backed on 2010’s acclaimed True Love Cast Out All Evil). Many of these songs swell and build almost to the bursting point, filled full with inventive instrumentation and oddities such as a flung file cabinet and unspooling duct tape. Though “White Shadow Waltz” is rather overwrought, “We Need a Myth” takes on the urgency of a Springsteen song. It’s a tour de force, a centerpiece that seems to be suggesting the messiah is a myth (shades of the Who’s Tommy?).

Maybe there’s no delivery from the fears Sheff expresses in almost every lyric (“Your Past Life is a Blast,” “Lay of the Last Survivor” and “The Rise” are particularly affecting), but there is, at least, the intriguing notion that he may be playing with words the way he plays with sounds. And whether they carry deep personal meanings or simply serve as imagery, his ability to create beauty and horror simultaneously, and marry it with such rich music, is the equivalent of what Hitchcock did with film. Sheff is, indeed, a musical auteur. It’s a good bet he could pull just about anything off. — LYNNE MARGOLIS