Mumford & Sons engage “Other Voices” in special Austin performance While the ACL Festival raged at Zilker, Arlyn Studios was hosting an Irish TV show with a stellar lineup of its own 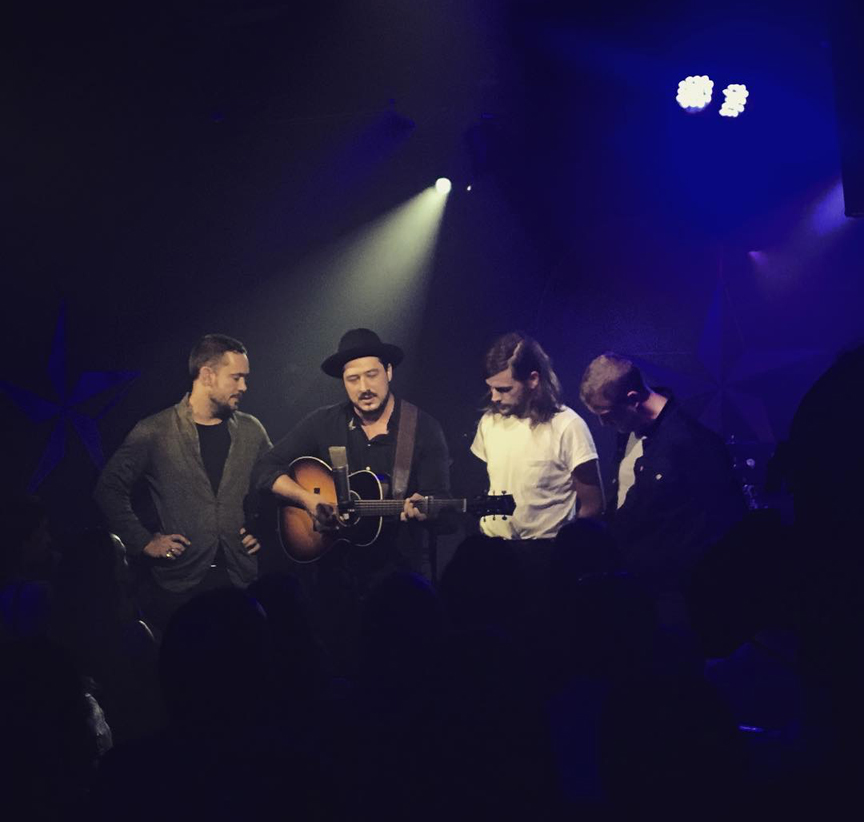 Some of the people sipping cocktails and schmoozing outside of Austin’s Arlyn Studios Saturday evening weren’t even sure who they were waiting to see; the schedule of tapings for the Irish TV show Other Voices simply said, “special guest.” The much-delayed evening act actually was Austin City Limits Festival headliner Mumford & Sons. And they were about to play for an audience of 85 to 90 people — 40 of whom would sit in seven small church pews in the living room-like recording studio.

The 15-year-old show had partnered with Arlyn, the history-steeped studio operated by Willie Nelson’s nephew, Freddy Fletcher, and Lisa Rainey Fletcher, to record a dozen segments in a new arrangement designed to attract international syndication a la Austin City Limits.

After kicking off with a Thursday evening reception and showcase, three days of taping began with Margaret Glaspy’s Friday afternoon set, followed by Margo Price — who also taped an ACL segment while in town to play the festival. Austin was well represented via Wild Child, Dale Watson, Carson McHone, Sweet Spirit and Asleep at the Wheel. ACL Fest performers Conor Oberst, Cage the Elephant and Gregory Porter also taped at Arlyn, along with the trio of Colm Mac Con Iomaire, Iarla Ó Lionáird and Aoife O’Donovan.

But anticipation was extra high for Marcus Mumford and the band — even more so because no one except staff and crew were even allowed inside while they painstakingly sound-checked.

Of course, the wait was worth it.

“We’re not gonna play any of the loud ones because it feels too tender,” Mumford said as he sat before a kick drum and his attentive audience, sipping tequila. “This is how we started out, playing little rooms for people like you, rather than sweating and swearing.”

The band — Ben Lovett on keys, Ted Dwane on bass, Winston Marshall on banjo and electric guitar and Mumford on guitars, lead vocals and percussion, augmented by Tom Hobden on fiddle and Chris Maas on drums — teased one another good-naturedly and cracked jokes between songs. They played only a handful, but each one was special. The charm factor was enhanced by the fact that the band was surrounded by giant representations of the Other Voices heart logo, inside which a lone star had been placed to signify the musical merger.

They opened with a languorous “Monster,” followed by “Ghosts that We Knew,” with beautiful four-part harmonies. It did indeed feel tender.

Before “Broad-Shouldered Beasts,” one of three songs they played from 2015’s Wilder Mind, Mumford said, “We never play sitting down, so this is relaxing. Especially when you’re a little hung over.” Apparently, they’d had a chance the night before to catch fellow U.K. stars Radiohead, which he called “the best band in the world — second only to … .” He paused just the right number of beats before filling in the only correct answer: “the Beatles!”

On “White Blank Page,” Mumford finally banged the bass drum and tapped a floor tambourine before the song’s sweet finish, on which his a cappella vocal was doubled, then tripled and finally quadrupled by his harmony-singing bandmates. For the “encore,” “Cold Arms,” the foursome gathered around a single mic planted before the front pews. Mumford strummed an acoustic guitar; the rest just blended their voices. It was exquisite.

But it was the surprise cover they threw in at the end that really sent the show over the top. Back at their instruments, they did Springsteen’s “I’m on Fire.”

And they are. Despite the dissing they’ve taken since they began blending American roots music influences with U.K. folk sensibilities, they’ve proven over and over again that strong songs played with passion can touch many hearts.

The experience also drove home the unstated point of the collaboration: The more we listen to other voices, the more we’ll appreciate how similar we are.

Though Other Voices is not yet aired in America, the show posts clips to its website: othervoices.ie

Related: A tale of two gatherings: ACL Fest 2016, Part 2 (starring Willie!) and a visit from Ireland’s “Other Voices” TV show make for a very exhausting — but magical — weekend of live music in Austin