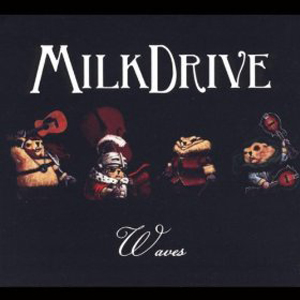 Austin’s MilkDrive bills itself as a jazz-grass band, and they live up to the label on this, their second album. The difference between MilkDrive and your average bluegrass group is especially evident on the record’s instrumentals. “Benny’s Bus” opens with a simple repeated riff that unfolds in several unexpected directions leading to a complex guitar solo full of shifting time signatures, a decidedly non-bluegrass banjo excursion and a hint of gypsy jazz as well. “Gargamel’s Cat” is more traditional, but the solos are taken at a relaxed tempo that emphasizes melodic exploration over blistering chops. The band’s original songs also stretch the parameters. They invoke the classic sounds of the ’40s on “The City,” a mellow ballad that implies a meeting in a deserted late-night barroom. Surrealistic overlapping vocals give “Run & Hide” a strange, psychedelic aura as instrumental and vocal parts drift in and out of focus. Bruce Robison’s “Leavin’” and Drew Smith’s “Papers on the Table” are played in a more straightforward manner, but it’s the band’s outside arrangements that really grab your attention. — J. POET