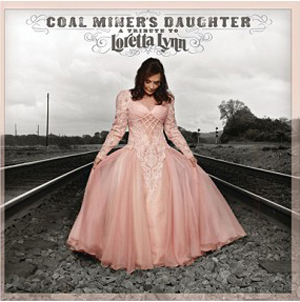 When you wanna talk about hard country singers, Loretta Lynn sets the bar. Aggressive, straight up and straight on, the Butcher Holler, Kentucky-born child bride who grew into the voice of working women in the ’60s and ’70s remains the 21st century standard. Given her importance, it really shouldn’t be surprising that this stellar tribute to Lynn attracted artists from across the spectrum of modern music. But what’s ironic is not only how convincing someone like Kid Rock is on the bawdy fidelity anthem “I Know How,” but how compelling a power-country popper like Carrie Underwood is leaning into some deep old-school power-twang on “(If You’re Lookin’ at Me) You’re Lookin’ at Country.” Lynn’s songs transport the singers to her world. Whether it’s the banged-up, real-world desire of “After the Fire Is Gone” with Steve Earle and Allison Moorer flexing old school, Van Lear Rose producer Jack White’s White Stripes saucy “Rated X” or Paramore’s leaned-down swagger fest “You Ain’t Woman Enough to Take My Man,” all are given an aggressiveness that unites fairly disparate musicians in the name of thrusting the truth front and center.

Not that everything has to be that intense. Faith Hill seems to almost channel classic Tammy Wynette for her silky, smoky turn on the subtle sexual healer “Love Is The Foundation.” And Lucinda Williams’ raw, sung-almost-like-breathing “Somebody Somewhere (Don’t Know What He’s Missing Tonight),” is a lament floating on puddles of steel guitar tears

The two highpoints are the time-warped “Honky Tonk Girl,” which finds echoing guitars, a wheezing accordion, a reeling fiddle and no less than Patty Griffin on backup vocals buoying Lee Ann Womack for a velvety confession of her transformation from good girl to bar fly. The other comes in Reba McEntire’s twin-fiddle perfect swing (via support crew the Time Jumpers) “If You’re Not Gone Too Long.” The track reminds listeners of Reba’s roots in a way that is plucky, technically intense and delivered with pure exuberance.

Obviously, this being billed as “Loretta Lynn and Friends,” the queen herself must sing, too. Lynn is joined by recent four-time CMA Award winner Miranda Lambert and Sheryl Crow for the project’s title track. Lynn can still show the kids how to do it: tossing her head back and going to the song’s center, demonstrating what a fiery, feisty country presence is.

To see how transmutable these songs are — and also how raw and real many of today’s most polished names can be — that’s the essence of Lynn’s common touch and universal truth. In a galaxy far from Butcher Holler, Lynn’s songs remain a constant you can count on. — HOLLY GLEASON

Next post The Roadhouse Rant: Thomas Jefferson was such a bad ass