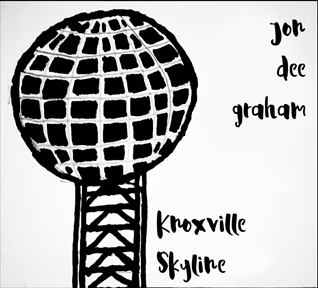 Between his gravelly, raspy growl of a voice and penchant for ferociously violent guitar outbursts — not to mention that cranky sea captain beard he wears of late — Jon Dee Graham can cut a mighty imposing figure. But even at full roar, the lion’s (or rather, bear’s) share of his songs have long betrayed him as far more of a hopelessly incurable optimist than a callous-hardened cynic. Oh, he might fight it tooth and nail at times, but the former/eternal True Believer has always been at his best when he sings of hope, strong hearts and the majesty of love. It’s a truism proven once again on Knoxville Station, a disarmingly sweet and unabashedly sentimental five-song mini-album/EP that Graham knocked out out in Tennessee backed by Knoxville rockers the Tim Lee 3 (guitarist Tim Lee, bassist/singer Susan Bauer, and drummer Chris Bratta).

Given that it’s been four years since Graham’s last studio offering (2012’s Garage Sale), Knoxville Skyline’s 21-minute run time admittedly seems a bit stingy at first. But there’s a clear focus and sense purpose evident here that that gives these five songs a truly satisfying cohesion. The set is bookend by the bluesy shuffle of “Things Might Turn Out Right” and the classic Jon-Dee-style ballad, “Careless Prayer,” both of which find Graham taking a hard look at a glass half full from different angles as if trying to find the empty. He shrugs the conundrum off rather lightly in that opening track, which may be the closest this guy’s ever come to sounding outright happy-go-lucky, but there’s a real sense of struggle in the closer. Weighing his rocky, self-destructive past (“made nothing but holes, found nothing but harm”) against the centered familial bliss of his present (“Now I’ve got a garden grown green and tall / All of my treasures are asleep down the hall”), he chalks both up to “a careless prayer.” Is there a hint that he sometimes still feels the tug of his old ways like the twitch of a phantom limb? Maybe. But as he sagely acknowledges with the wisdom of hindsight, although all prayers are answered, “sometimes the answer turns out to be no.”

As fun as it starts and ruminative as it ends, though, it’s the three very different but equally heartfelt tributes in the middle of the EP that really make Knoxville Skyline shine. “Dan Stuart’s Blues” floats along like a wistful daydream, with Graham flipping through careworn memories of his mid-90s stint playing guitar with the former frontman of L.A.’s Green on Red. (For the record, Stuart’s not dead — just living down in Mexico, still “looking for the real thing.”) Vivid and poignant snapshot memories also fill “The Ballad of Barbara and Steve,” Graham’s deeply moving eulogy for Barbara Wolfe and Steve Silbas, who ran the beloved San Antonio cafe and venue Casbeers from 1999 to 2011. Within three years of Casbeers’ closing, both husband and wife passed away from separate health ailments. There’s a sadness palpable in every line, but in lieu of maudlin mourning, Graham pays his respects to the couple in the form of a romantic, Tex-Mex-tinged paean to their love — not just for each other, but for the roots-music scene they dedicated their lives to supporting.

And then there’s the rocker. That there’s only one of those out of the bunch here should be a bummer, but “Shoeshine Charlie” — Graham’s flat-out best moment of amp-frying, scorched-earth badassery  since 2001’s “Laredo (Small Dark Something)” — deserves its own pedestal. Fittingly, it’s a righteous tribute to Graham’s favorite room for rocking in the entire world, Austin’s Continental Club. The late “Shoeshine” Charlie Miller may be long gone, along with a lot of the other old Continental mainstays and former bandmates Graham mentions in the song (some went back East, others out West, “and who knows what ever happened to the rest”), but their spirits still haunt the iconic Sought Congress hotspot. Just like Graham himself, hellhound for that stage every “Wednesday to eternity” with a battle-cry roar of “Strap it up boys — these kittens aren’t going to drown themselves!” He makes it sound like dirty work, because it is, but don’t let that fool you: For Graham, every damned word and note is a labor of love. — RICHARD SKANSE