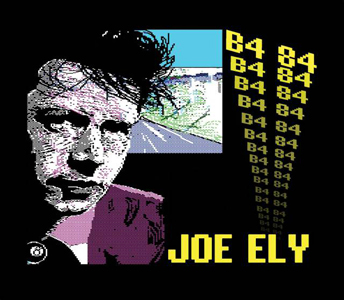 File this between “ahead of its time” and “better late than never.” Way back in 1983, Joe Ely took advantage of a overdue break from the road to don his hobbyist hat and tinker around with his newly acquired Apple II computer, a primitive Roland 808 drum machine, and an even more primitive (but at the time revolutionary) Alpha Centari music sequencer. Together with guitarist/keyboard player Mitch Watkins and later a couple of other musician friends, he began painstakingly assembling one of the first albums ever recorded with the technology; “You’d have to load a floppy disc for each part of a song, like each 30 seconds,” he recalled in an interview in 2011. When he was finished, he took the tracks to his label at the time, MCA, thinking he had his next record in the can. But the label balked and insisted he start again from scratch with a full band in a proper studio environment, resulting in his 1984 album, Hi Res. Twenty years later, it remains the only one of Ely’s MCA-era albums that’s never been officially released (domestically, at least) on CD or even as a download. Fortunately, Ely held onto his “garage” tapes, and now, with the release of B4 84 on his own Rack ’Em Records label, we can finally hear the album he wanted to release in the first place.

So how does it sound? Pretty damn great, actually. One assumes that Ely, still a computer and home studio buff all these years later, did some degree of punch-up work using more modern hardware and software; the mastering, at the very least, packs a satisfying wallop. But the integrity of the original tracks shines through, and it’s little surprise that that old Roland holds up a lot better than the long-expired gated drums heard all over Hi Res. The track lists aren’t identical: missing are a few Hi Res songs including the pre-flamenco-era “Letter to Laredo,” replaced with tracks like the previously unreleased “You Got the Broken Heart” and an early crack at “My Baby Thinks She’s French.” But the original, superior versions of the three best songs from Hi Res are all here: “Imagine Houston,” a steamy, surrealist slice of New Wave noir; the twitchy, jumpy “What’s Shakin’ Tonight,” still one of the coolest singles of Ely’s career; and, of course, “Cool Rockin’ Loretta.” At a mere 4 minutes long, the song’s just a tease on B4 84 compared to the epic statement it makes in a live setting, but still … “My, my, my, ain’t she fine!” — RICHARD SKANSE