Jamey Johnson: “Living For a Song: A Tribute to Hank Cochran” 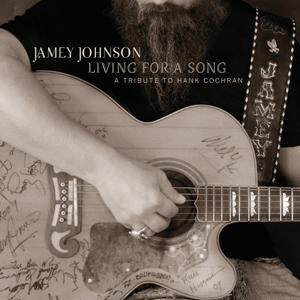 JAMEY JOHNSON
Living For a Song: A Tribute to Hank Cochran
Mercury Nashville

Jamey Johnson is the latest country artist to gain success with a retro, or more properly, traditional country sound. It’s obviously not a just an empty stance, either; his own songs are steeped in heartache, hangovers and divorce, delivered in a rumbling baritone that sounds like it’s coming from under the floorboards of an old honky-tonk at closing time. A tribute to the late Hank Cochran thus seems like a natural exercise for Johnson: Johnson, no slouch of a songwriter in his own right, knows his way around a classic country tune, and Cochran wrote ’em for decades — beginning auspiciously with 1960’s “I Fall to Pieces” (a Harlan Howard co-write that Patsy Cline took to No. 1). Johnson covered a Cochran song himself (“Set ’Em Up Joe”) on his last album, 2010’s acclaimed double-disc set, The Guitar Song, and he visited Cochran at his bedside hours before his death the same year. Unfortunately, Living For a Song is a bit of a letdown — not for lack of heart or good material, but because Johnson just invited too many cooks into the kitchen. Every song on the album but one (“Would These Arms Be in Your Way”) is recorded as a duet, and the all-star lineup — including Willie Nelson, Emmylou Harris, Merle Haggard and a host of other notables — proves distracting to the point that Johnson sounds like a guest on his own record. The end result doesn’t always represent Cochran at his best, either; he was certainly a great songwriter, and there’s a good mix of familiar and obscure tunes here, but somehow it doesn’t all hold together. Some of the lesser known songs don’t quite measure up to the big ones, and the big ones here often pale in comparison to their best-known versions. “The Eagle,” with George Strait, rides a Waylon Jennings-like backbeat, but hints of right-wing jingoism. Elvis Costello’s turn on “She’ll Be Back” is fine, but it’s a rather slight tune. “I Fall to Pieces,” of course, is a great tune — but the somnambulant version here with Haggard doesn’t hold a candle to Cline’s. Granted, there are a few keepers here, too, including Johnson and Alison Krauss’s take on “Make the World Go Away,” which serves as a reminder that country and pop aren’t really that far apart. But overall, Living For a Song is an album that just doesn’t rise up to the level of its good intentions. — J. POET