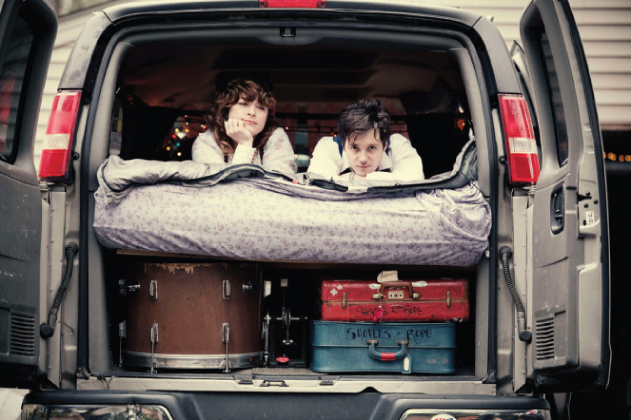 Cary Ann Hearst and Michael Trent aren’t the first duo to pour country, folk, blues, good ol’ rock ’n’ roll and DIY attitude into a cauldron and boil up a batch of Southern gothic murder ballads, brassy soul-stirrers, twang-punk and sweet li’l love songs — all of which show up on their new album, O’ Be Joyful. They might, however, be the first who got their act together not as a vehicle for their joint effort, but mainly to get some love for their solo projects.

Their evolution into an actual band was an accidental byproduct; even their moniker, Shovels and Rope, was repurposed from its original role as the title of a mayhem-filled album they’d done together just for kicks. (Shovels and rope, they note, are common tools for doling out death — or dealing with its aftermath — in tried-and-true singin’-about-killin’ tradition.) 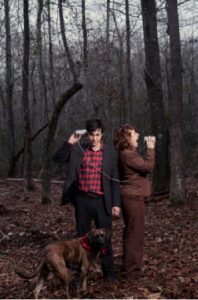 Taking their show on the road with a motley array of instruments they employ every limb, plus lips, to play — sharing each as easily as they share harmonies — the do-it-all duo have been scooping up loads of attention lately, and it’s no wonder. Hearst has one of those spellbinding voices that crackles with intensity one minute, and soothes like a lullaby the next. A lesser man might be dwarfed by this red-headed tornado, but Trent easily holds his own. And when they lean in close to share a mic, their mouths nearly touching, you can almost feel the heat rising, as if Johnny and June were singing “Ring of Fire” together for the first time.

Just after O’ Be Joyful’s mid-summer release, they filled Austin’s Saxon Pub tighter than an overstuffed suitcase, despite playing on a Monday. They also got a standing ovation, a rarity there. And they earned it, with a set full of songs that threatened to blast out of control, only to be lassoed in with a rodeo star’s finesse.

That adoring crowd might have been lured, in part, by “Another Like You,” a standout track from Austinite Hayes Carll’s lauded album, KMAG YOYO (and other American stories). That’s Hearst zinging lusty rejoinders to every put-down come-on Carll flings in the clever tune — the No. 1-ranked song on American Songwriter magazine’s 2011 Top 50 Songs list.

But chances are, Hearst and Trent had hit at least some listeners’ radars before. He was in a band called the Films and did two solo albums, including 2010’s The Winner. She’s done two solo discs, too, including 2010’s Lions and Lambs, and killed it at 2007’s Austin City Limits Music Festival with her then-band, the all-guy Gun Street Girls. Her song “Hell’s Bells” also played over the closing credits of a True Blood episode and landed on the Grammy-nominated compilation, True Blood: Music from HBO’s Original Series, Volume 3.

The Charleston, S.C., couple, married since 2009, opened a string of gigs for Carll last year, priming the pump for O’ Be Joyful — which bubbled right up to No. 3 on the Americana Music Association’s airplay chart. It also debuted at No. 1 on Billboard magazine’s Heatseekers chart and notched No. 7 on its Folk list — though “folk” does no justice to the volcanic rock they’re capable of churning up together.

“It’s definitely more rock, but are we folk-rock maybe?” wonders Hearst as she and Trent, conferenced in on separate cell phones, chat from the “RV safe zone” of a Walmart parking lot. They’re trying to define their style and the influences each contributes, some of which are catalogued in the album’s autobiographical opener, “Birmingham.”

“I always played in rock bands growing up, and I definitely had a country-music background,” says Trent. “My dad is a bluegrass guy who plays mandolin and Cary’s stepdad is a bluegrass guy, and he plays mandolin. I grew up wantin’ to play rock ‘n’ roll and I think Cary grew up more with traditional country music. But she always loved rock ‘n’ roll, Iggy Pop & the Stooges and the Cramps and all that, and I was into the darker side of storytelling in country music, like Townes Van Zandt, and I was really intrigued with the Elvis Costello country records. So I guess there’s a little bit of both from each of us.”

But there’s little doubt regarding the source of the “Psycho Killer” and “David Bowie look-a-like, circa ’85” references in “Cavalier,” or the “Hail Hail” line, “Hail hail 33, your violent hiss sounds so sweet to me.” It doesn’t take a vinyl archaeologist to know these two have the rock of ages pulsating through their veins, from Chuck Berry to Talking Heads to Bowie and Jagger dancing in the street.

It should be noted that Hearst was born in Mississippi and grew up in Nashville (where she played in several bands with neighbor Dustin Welch); she moved to Charleston for college, and stayed. Born in Houston, Trent moved to Colorado at 3. But he claims his older siblings, who spent many more years as Lone Star residents, rubbed their Texas roots all over him. And his mom has a bumper sticker that reads, “Texan till I die.”

“I still claim Texas,” he says proudly. Regarding his abbreviated residency, Hearst insists, “Michael got robbed.”

In her cute Southern lilt, she says of his family, “They were the Texans that wear cowboy hats on the ski slopes in Colorado. And I didn’t realize there was such an aversion to Texans in Colorado.

“See, I’m from Tennessee,” she drawls sweetly, “and we think Texans are cousins, you know. T for Texas, T for Tennessee, and we’re practically the same. But the Coloradans are a l-i-i-ttle bit, well, they’re racist against the ol’ Texans for bein’ from Texas.”

Trent laughs at her incredulous description of this terrible injustice. They crack each other up onstage, too, in-between all the thumping and tapping and strumming and blowing and singing. Their easy repartee (and her Dixiefied Dan Ratherisms) makes the moments between their songs just as entertaining as their music — which, by the way, is tangled full of Southern kudzu. You can practically taste the moonshine and slap the mosquitoes buzzing between verses of songs like “Keeper” and “Kemba’s Got the Cabbage Moth Blues,” or the hot-mess sexiness of “Tickin’ Bomb” (actually about a stalking fan). And you wonder if an Appalachian version of Sweeney Todd might have inspired the spooky horror of “Shank Hill St.” It’s richly layered storytelling — often conceived, and even recorded, as they navigate long stretches of highway, accompanied by their 4-year-old North Carolina Plott hound, Townes (that’s him on the album cover).

“Michael’d be driving and I’d be sittin’ there in the passenger seat. We’d be bouncin’ ideas off of each other,” Hearst explains of their process. “On the other hand, because one of us is always driving, the other one is, ‘Can you work on the chorus of this song?’”

Amanda Shires was corralled to contribute fiddle after sound check one night; horn player Nathan Koci, guitarist Bill Carson, and synth player Joel T. Hamilton are also heard. But the hardworking couple did most of it themselves, just as they do onstage, like buskers playing a mini-orchestra. Then they hump their own gear and sell their own merch.

“Michael and I are like a two-mule team,” says Hearst. “We’re pullin’ the wagon across the country and puttin’ all the legwork in.”

After years of trying to excavate fame from separate trenches, sharing Shovels and Rope suits them just fine.